When you’re driving a near-1,500 horsepower Bugatti, slowing down is arguably just as important as going fast, and now the hypercar maker has come up with a new world’s first in brake technology. The company has figured out how to 3D print a brake caliper, and not just any old caliper. It’s the largest in the industry today and, as you’d expect from Bugatti, uses a particularly high-tech and unusual material.

For the most part, brake calipers – the part of the braking system which clamps down on the brake discs and slows the wheels – are made from aluminum alloy. Indeed, the Bugatti Chiron’s brakes use aluminum alloy, with the automaker taking the metal and then forging a solid block. With eight pistons on the front, and six on the rear, they’re the most powerful brakes in the world.

This new 3D printing system goes a step further. Instead of aluminum alloy, it uses the same metal that the Chiron’s current brakes rely on for the pistons: titanium. In fact, it’s a special titanium alloy called Ti6Al4V, and is more typically found in plane undercarriages and wings, or being used in rocket engines. Bugatti couldn’t use it for the entire brake caliper assembly on the Chiron, since the usual milling or forging technique was scuppered since titanium alloy is simply too strong. 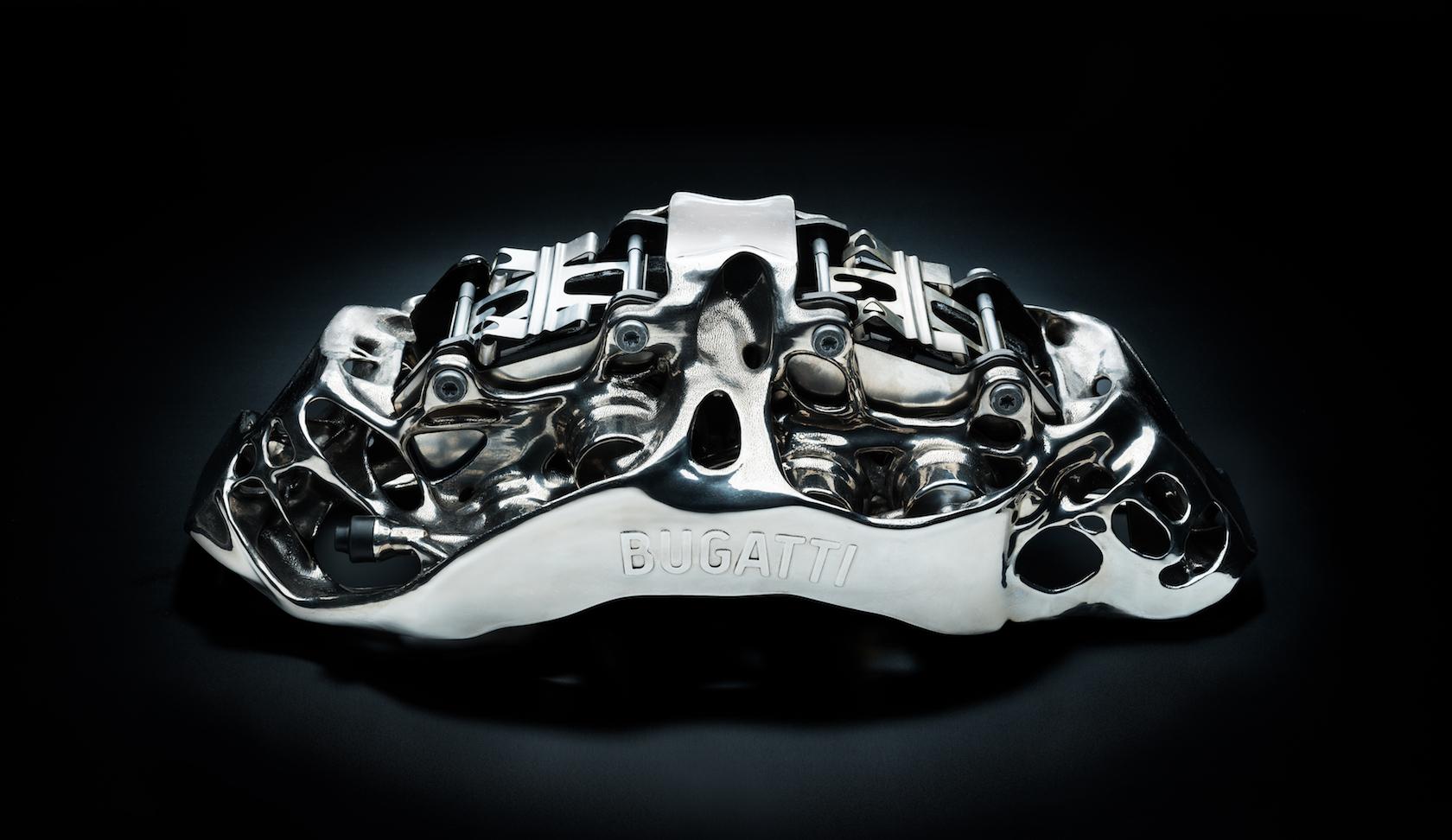 However, a new, high-performance 3D printer developed by the Bugatti Development Department in collaboration with Laser Zentrum Nord of Hamburg offers a different approach. A selective laser melting unit targets four lasers onto individually laid layers of titanium powder. Over the course of 45 hours, 2,213 layers are put down, each cooling almost instantaneously as the overall shape of the caliper is formed.

At the end of the process, any titanium powered not fused is removed, filtered, and then used again for the next unit. A final heat treatment on the remaining structure is its final stabilizing step, with an initial 700 degree centigrade blast tapering to 100 degrees. Bugatti then removes the supporting structures, smooths the remaining surfaces by mechanical, physical, and chemical means, and finally uses a five-axis milling machine which – over the course of 11 hours – goes over the functional surfaces such as where the pistons make contact.

Bugatti says the end result is considerably stronger than an aluminum equivalent could be. Indeed, a force of more than 275 pounds could be applied to a square millimeter of its surface, without it rupturing. It’s lighter, too, at 6.39 pounds versus the Chiron’s current 10.8 pound eight-piston caliper. That’s despite wall thicknesses on the 3D printed component being as thin as a single millimeter.

The new parts will be tested on production cars over the course of the next six months, Bugatti says. The expectation is that the production time of each component could be shortened, too, and the same system used to make other high-strength, lightweight parts for future performance cars. However, it won’t just be applicable for Bugatti’s range.

“In 3-D printing development, Bugatti is the leader in the Volkswagen group,” Frank Götzke, Head of New Technologies in the Technical Development Department of Bugatti Automobiles S.A.S. points out. “Everyone can and should benefit from our projects. This is also part of Bugatti’s role as the Group laboratory for high-tech applications.”

Considering the 3D printed titanium alloy caliper could allow the engineers to shave 40-percent of the weight off an identically-performing – or, indeed, stronger – component in the current production Chiron, that opens the door to some serious savings. Even if VW Group as a whole only used the process selectively and conservatively, the weight losses would add up to better performance and fuel economy, both things that rank highly on the priorities of even drivers who can’t afford a supercar.