Brabus Rocket 900 stomps around with 900 horsepower

Brabus has a long history of taking fast Mercedes cars and SUVs and making them even faster. The company has announced a new, very limited edition vehicle called the Brabus Rocket 900 “One of 10.” As the name suggests, only ten units will be built under the Brabus Masterpiece label.

The vehicle’s heart is a biturbo V-8 engine that had its displacement increased to 4.5-liters and uses a force-induction system. The vehicle produces 900 horsepower and 922 pound-foot of torque at its peak. However, the torque is limited to 774 pound-foot, presumably to prevent the transmission from being destroyed.

The vehicle features the Mercedes SPEEDSHIFT MCT 9-speed transmission and all-wheel-drive. The four-door vehicle can reach 62 mph in 2.8 seconds. The car can reach 186 mph in 23.9 seconds. Top speed is electronically limited to 205 mph due to the tires. Other features include custom Monoblock Z wheels in 21-inch front and 22-inch rear.

The wide wheels and tires meant that Brabus had to attach a carbon widebody kit, which also improves the vehicle’s style. Other aerodynamic tidbits for the car were developed in the wind tunnel and help increase downforce and stability at high speeds. In the image, the car is painted in a color called Stealth Gray and is found in the interior. 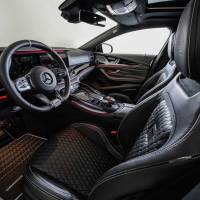 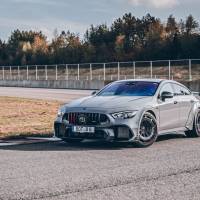 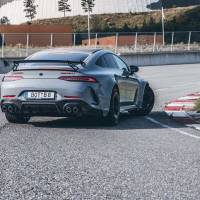 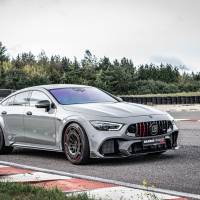 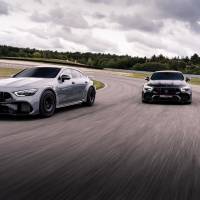 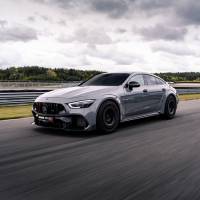 The leather seats are covered in exclusive designs and feature gray seams and piping. The main areas of the seats are covered in Royal Black leather and Alcantara. Seats also have a special coat of arms pattern applied along with perforations in the leather on select places. The custom interior is beautiful and matches the exterior of the vehicle well. Pricing is unannounced, but with so much power and its limited-edition nature, you can bet it’s costly.