If you’ve been holding out for the Steam release of Borderlands 3, your wait is about to come to an end. Gearbox has announced that the game will be heading to Steam next month, roughly six months after it launched on the Epic Games Store. When Borderlands 3 was first announced, it garnered a fair amount of controversy for being an Epic Games Store timed exclusive on PC, but now it seems that period of exclusivity is finally coming to an end.

Specifically, Borderlands 3 will launch on Steam on March 13th, six months to the day after it launched on the Epic Games Store. It’ll be interesting to see how Borderlands 3 performs on Steam – it stands to reason that some who were upset wound up buying it on the Epic Games Store anyway, while others may have lost interest in the title while waiting it to head to Steam. Still, when Steam has as many users as it does, this launch will probably still be a big success for Gearbox and 2K Games.

Sad to say it, but I'm cancelling my GDC trip. I suspect that the show will be officially cancelled by the end of the day

In addition to announcing the Steam release of Borderlands 3, Gearbox also revealed that we’ll be getting the second of four DLC campaigns next month. Dubbed Guns, Love, and Tentacles: The Marriage of Wainwright & Hammerlock, this second DLC campaign will be launching on March 26th, two weeks after Borderlands 3 goes live on Steam. 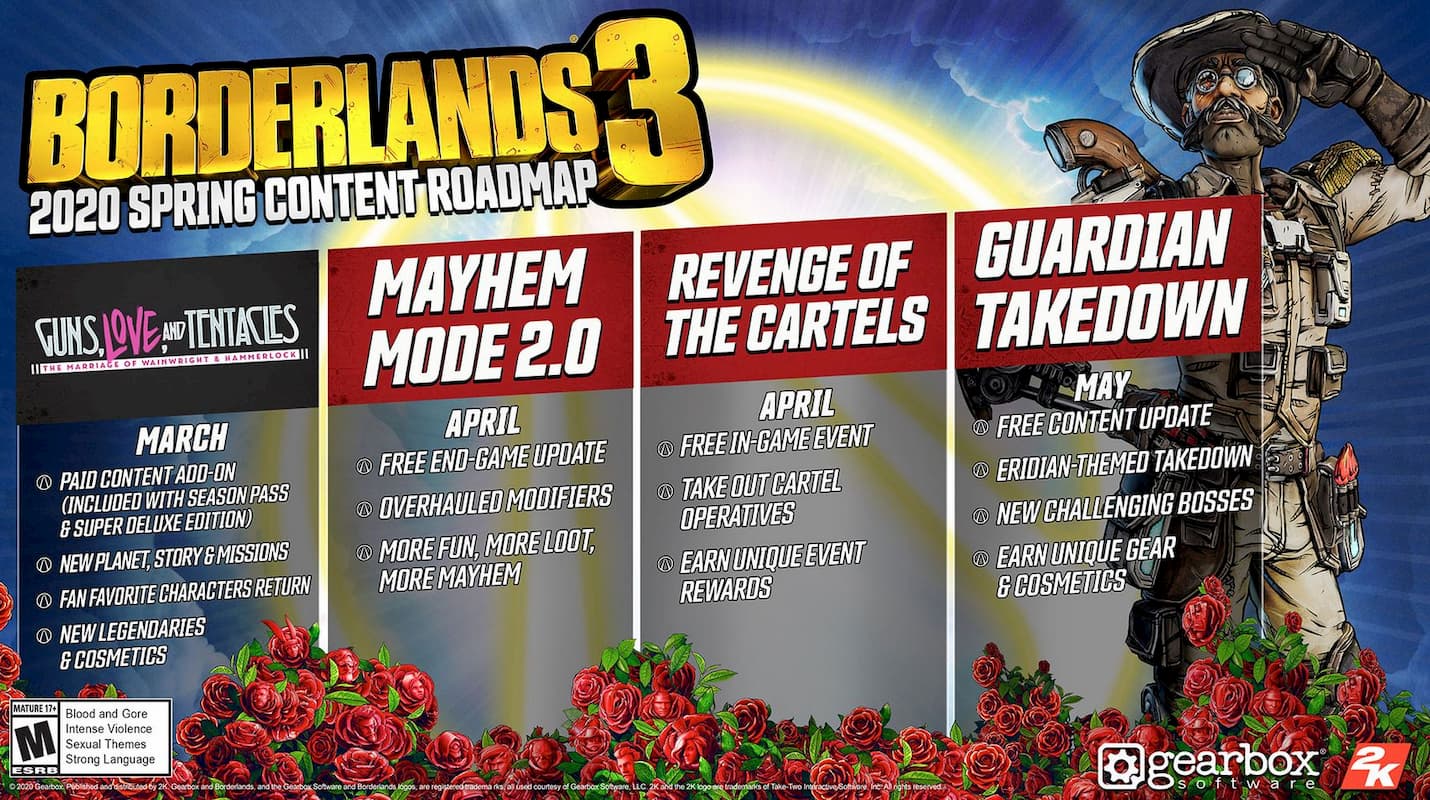 The campaign will send players to the planet of Xylourgos to attend the wedding of Alistair Hammerlock and Wainwright Jakobs, which is described as a planet so brutal only the “most vicious wildlife” remains. Players will get to meet up with Gaige, one of the DLC characters from Borderlands 2, during the campaign, while you’ll do battle with “mutated, tentacled zealots who are unlike anything you’ve encountered in Borderlands before.”

In addition to announcing Guns, Love, and Tentacles, Gearbox also revealed the spring 2020 roadmap you see above. April will bring a new end-game update called Mayhem Mode 2.0, along with an in-game event called Revenge of the Cartels. May, on the other hand, will give us a free content update and an eridian-themed takedown. We’ll keep our eyes peeled for more information about that content, so stay tuned.