Android tablets aren’t exactly uncommon, so we generally reserve our extreme excitement until they actually arrive in stores rather than on display at trade shows touting for business.  Still, when your tablet looks like an iPhone on steroids you’re bound to get some attention, and that’s just what’s happened to Chinese firm Boeye: their MID might run Android but its the striking Apple resemblance (and the estimated budget price tag) that has people excited.

No hardware specifications are known, though the display looks to be around 5- to 7- inches and we’re spotting a front-facing webcam on the upper right-hand corner.  It’s reasonably thin, too, and we’re hoping that’s a scratch-resistant glass fascia making the Boeye ideal for dropping into a rucksack for some mobile browsing.

As for that eye-catching price, Boeye are suggesting their Android MID will drop for sub-$300, which would certainly make for an appealing purchase.  We’re a little sceptical that – even with a free OS like Android – they can bring the hardware in at such a low cost, but this is one occasion we’d be happy for our doubts to be proved wrong. 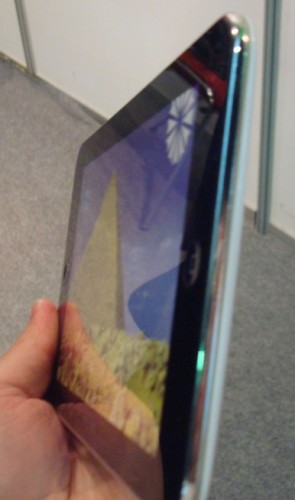