How the BMW M8 GTE got its track teeth

When you’re looking to kick butt and take names with your brand new race car, you need to go big: that’s why BMW chose the 2018 Rolex 24 at Daytona to unveil its latest motorsport creation, the M8 GTE. The culmination of several years of development by both the M8 product team and BMW motorsports, it’s not been an easy path to the race track, but it’s already looking like it was worth it.

“The M8 is the best race car that BMW Motorsport has ever built, as long as I have been with the brand” Jens Marquardt, BMW Motorsport Director says. “Everything from every program that they have done so far – DTM, GTE, whatever – has gone into the concept of the car and design and the development.” 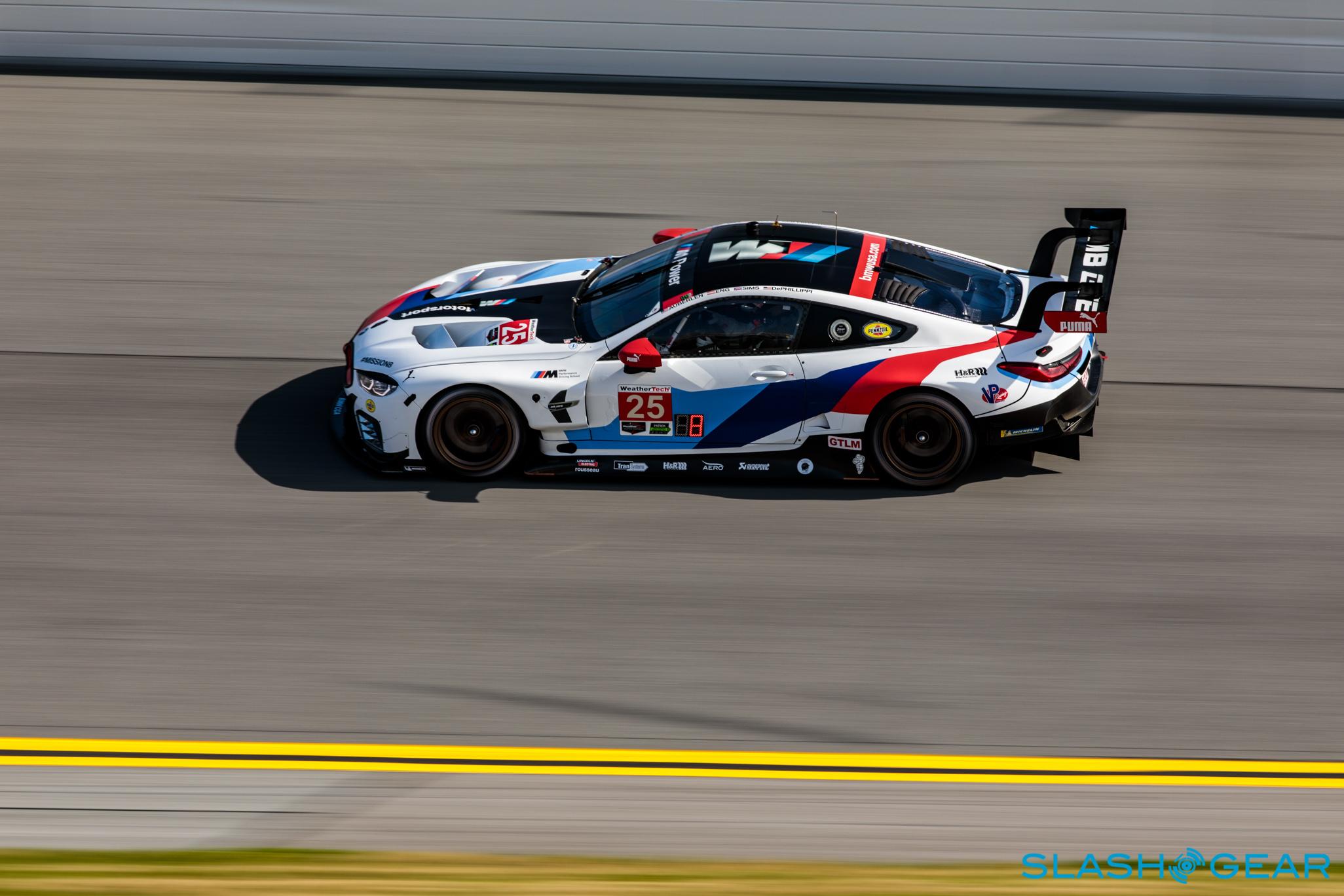 Marquardt is rightly proud of what’s been achieved. BMW Motorsport had the bulk of the directors agree and give their approval for BMW Motorsport to develop the next generation race car; they also decided to put the car on the race track, before the production M8 hits the showroom and gets into the hands of customers. That’s a first for BMW. “It shows that Motorsport and BMW has been linked in the past and is linked in the present and will be linked in the future,” Marquardt points out. That’s despite no shortage of streetcar DNA, so getting the car into the hands of BMW’s motorsport drivers first is a big deal.

The engine for the M8 GTE was derived from the M6 GT3 engine, built in Germany, and the subject to a few modifications in order to install it into the race car. Both the hot side and cold side of the engine are derived from the production engine, Marquardt explains: the cold side refers to the intake half of the engine, while the hot side – or the exhaust side – is typically where the inductions are attached. He estimated the M6 GT3 engine consisted of 95-percent production-based components, while the M8 GTE engine consists of 40-percent production car components. That’s in part because the engine both has to deliver plenty of performance but also be very efficient. 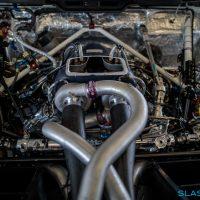 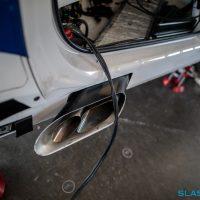 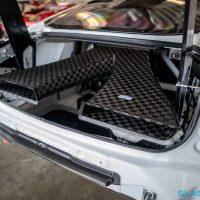 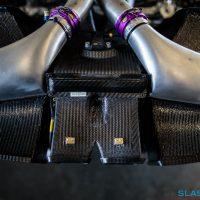 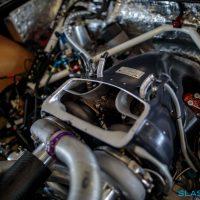 The engineers modified the whole hot side of the engine, in fact. “We changed the crank and went to a flat plane crank,” Marquardt says; indeed, the flat plane crank divides the V8 in half, and though not physically separated, the modified firing order of the cylinders effectively cuts the whole thing into two inline-4 engines. This layout allows for end-to-end balance, as the first and last piston are always precisely in the same position, as are the center two pistons. Each bank is following an R-L-R-L-R-L-R-L firing order. The advantage is that you have lighter weight engine components, which allow for higher RPM and better acceleration rates than a typical V8. The engine also produces more torque and an even exhaust gas pressure from each bank. 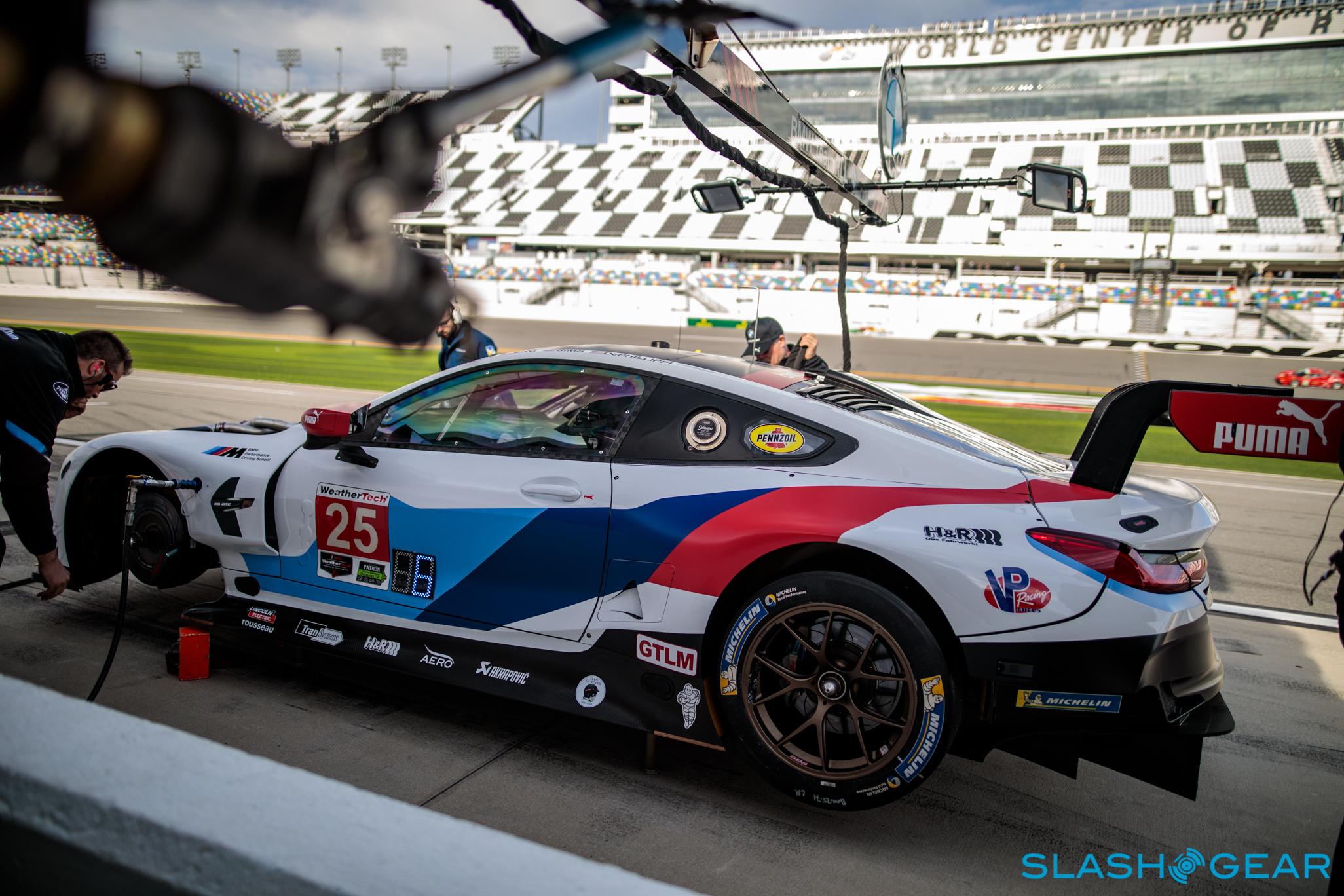 The latter is important because it means the turbos get consistent pressure. The downside, though, is that flat plane crank engines have higher vibrations; that’s why the design is rarely used in production cars. The hot side is separated, which makes boost control and delivery easier, while the turbos are inside the “V” which is normally where the intake would be. So, BMW’s engineers reversed it, to contain all the heat to that center and direct the cool air over the turbos.

As you’d expect, all that requires some careful management. To keep the engine and traction control running as intended, BMW switched its electronics and used Bosch-supplied systems. The new engine management gave the engineers a lot more freedom regarding race strategies, while the Bosch traction control system opened the door to a self-learning algorithm for controlling power delivery. It figures out track friction and the driver’s style at the wheel to adjust the traction on the fly. 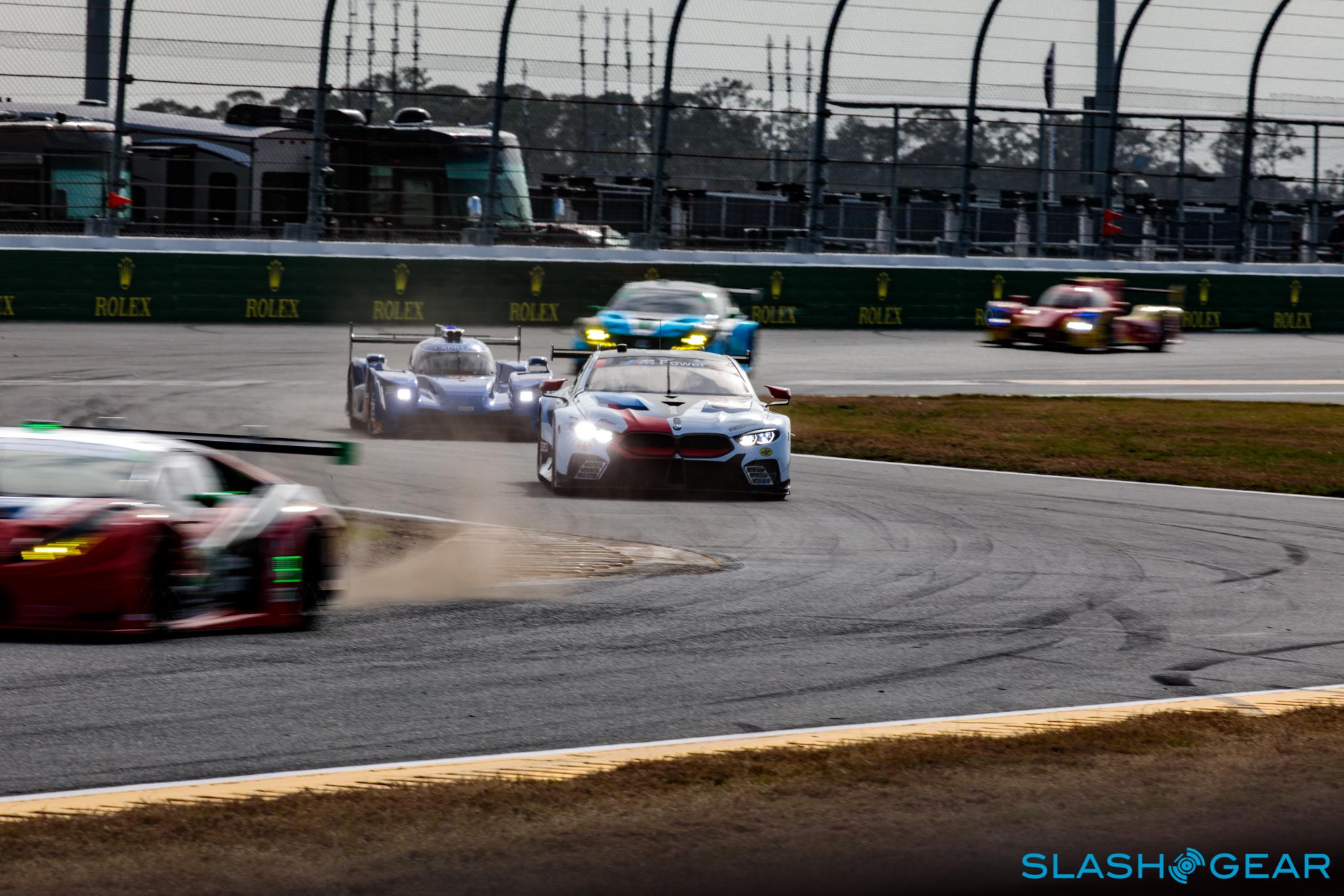 While power is important, after all, traction is arguably even more so: if you don’t manage wheel spin, you’re not putting your power onto the pavement. “We worked on the traction control algorithms quite heavily,” Marquardt points out. The new system is also beneficial for new drivers who need to learn the car: they get a control knob in the cockpit which allows them to lessen or increase the amount that the traction control will intervene. 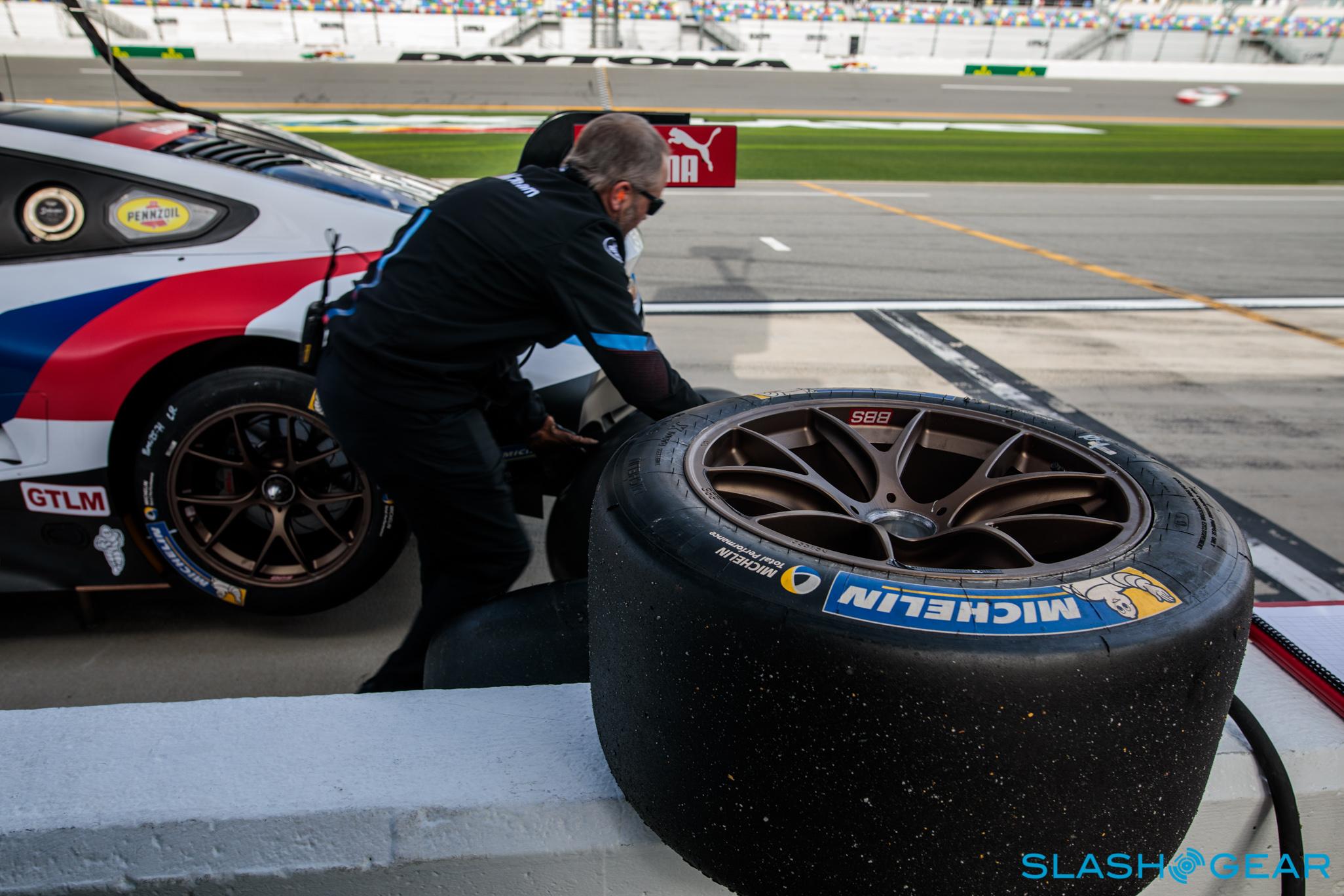 At the front, the engineers have replaced the very complicated exhaust manifold system that they had on the M6. The old system was spread around the front veil of the engine, and it produced a lot of unnecessary heat. M aficionados will notice the lack of the signature BMW M four exhaust tips at the rear, too. For the M8 GTE, they moved the exhaust to the side of the car, doing away with complexity in the process and allowing for better airflow under the car and at the rear. Marquardt joked that only downside is that a passenger seat can no longer be fitted for hot laps, as that is now quite literally the hot seat.

Aerodynamics is the most significant challenge for more classically-shaped cars. The M8, however, is a great base car, BMW says, since it’s very narrow in the back. The BMW Motorsport aerodynamicist was also able to use the very shallow back for a better angle of the aero work: the shape increases the quality of the air flow with the narrow width, and this allows it to rush more easily over the wing. The floor is a very powerful aerodynamic tool, too, and BMW put a lot of work into the design there as well to maximize downforce and minimize drag. Low drag helps improve overall stability, after all. “The M8 GTE easily compares to that competition even with the longer wheelbase,” Marquardt points out, “which helps with the airflow, and the balance is good.” 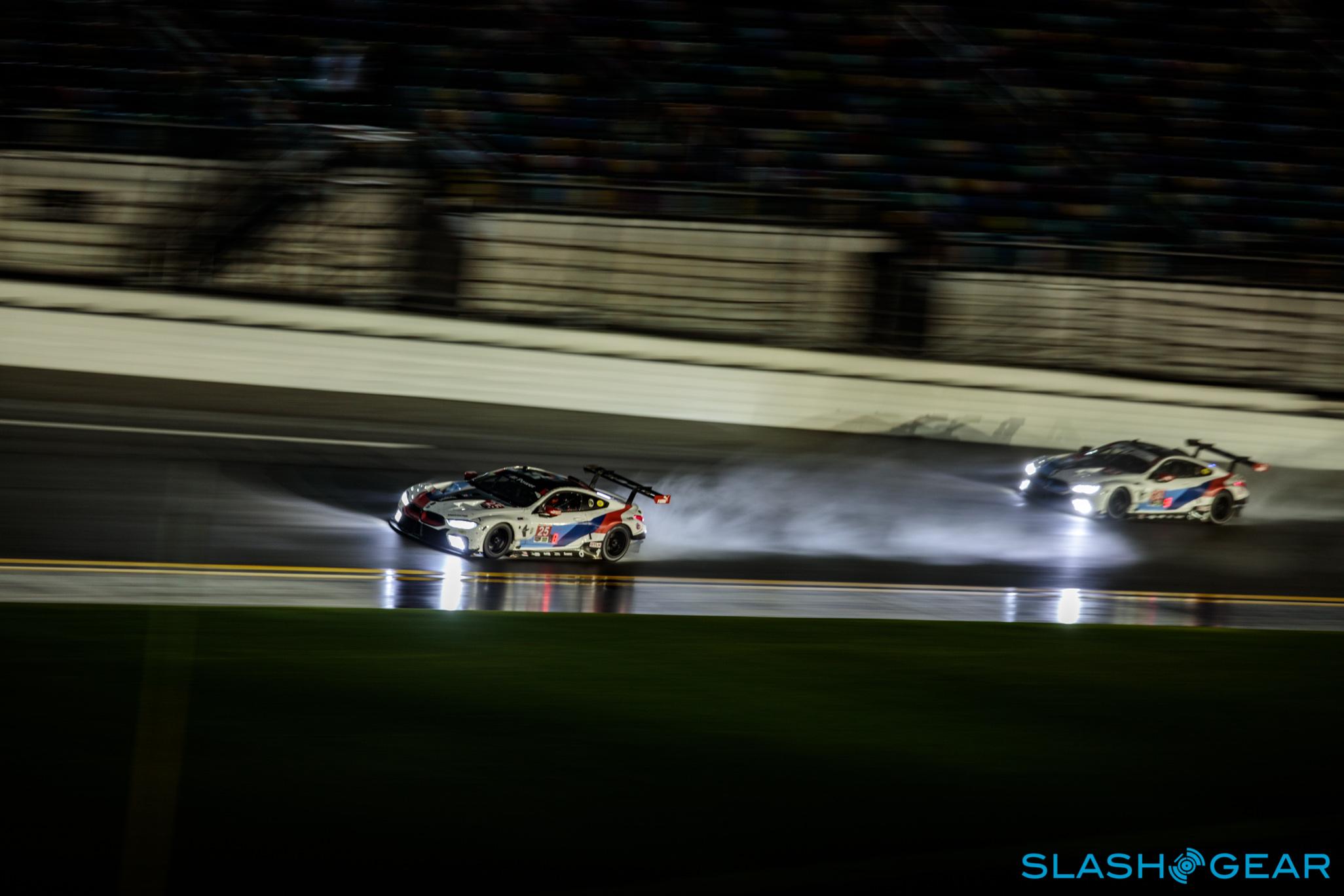 The most significant challenge of modifying a normal production car for racing is weight, and BMW’s team managed to strip plenty of that away for the M8 GTE. Sizable portions of the classic structure were replaced with carbon, for example, while the roll cage pushes the driver as far inboard as possible, to maximize the amount of passive safety. 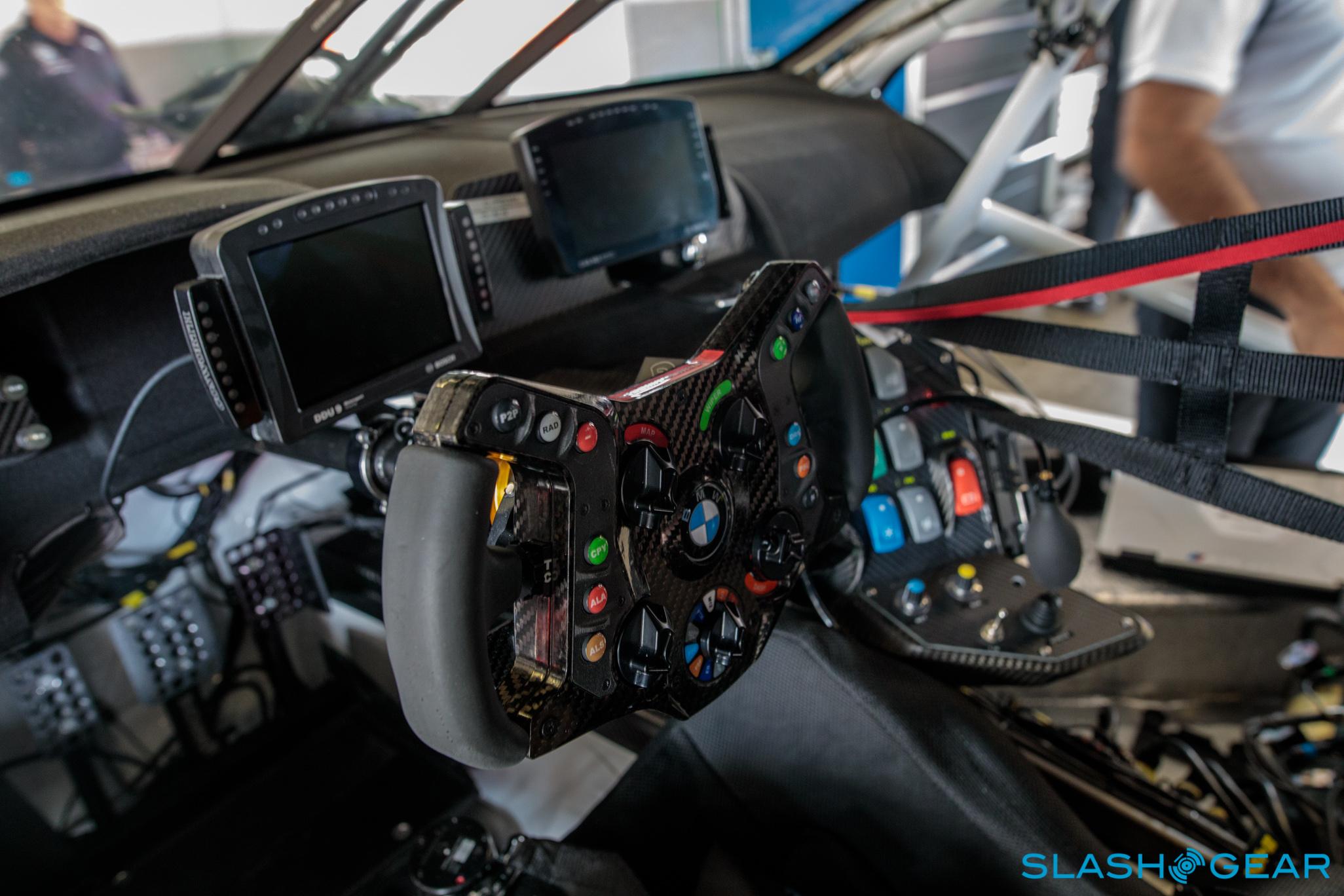 With multiple drivers expected at the wheel, a lot of effort was put into the seating position. The pedal box is movable to help fit drivers of all heights, for example, while a lot of preparation work was done during the development phase to find the right ergonomics for the switches and the new steering wheel. The latter is another departure road-going M8, very much resembling something you would see on in Formula One. There’s the Bosch center screen that includes lap-times, gear indicator, RPMs, speed, and pages of car information and diagnostics. The drivers can use the steering wheel controls to help change boost pressures and other engine parameters, too.

BMW driver Alexander Sims explained that, while its technically possible for the driver to make these changes, that’s typically only done when troubleshooting is necessary. It’s rare for major changes to be made while the driver is underway, in fact. 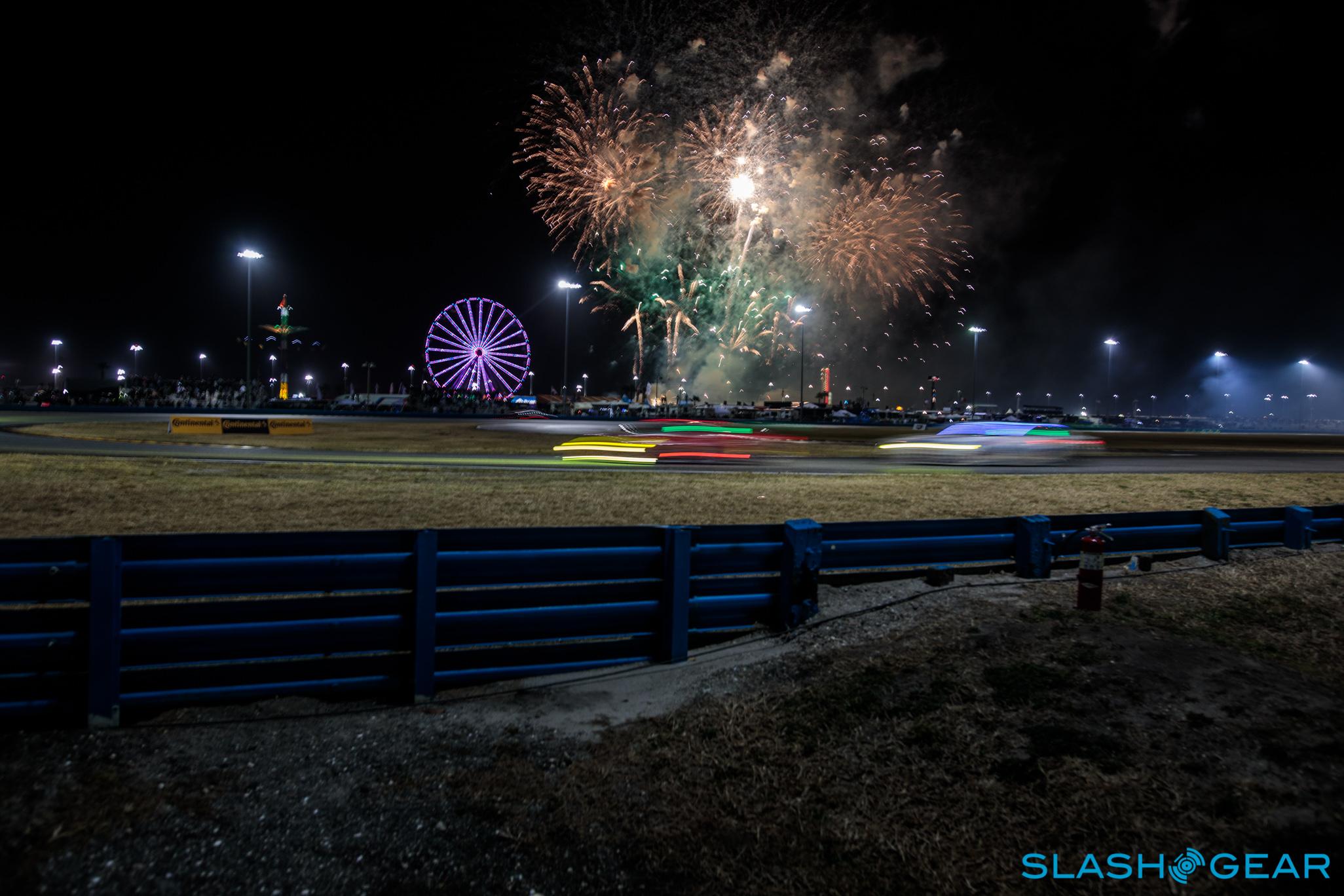 The gearbox – which the engineers located in the back of the car combined with the 4-liter V8 turbo engine – needed to handle a whole lot of torque. So, the challenge for the BMW Motorsport engineers was to find a transmission that could cope with the stress. The answer came from Xtrac transmissions, who built a gearbox that could not only handle the power but deliver it smoothly, and deal with 2,500 kilometers of problem-free test driving.

The revised power-assisted steering system also greatly improves the drivability, as it keeps the steering light and easy. There’s also a rear-view camera with a radar system that highlights faster-approaching vehicles from the rear. All of these systems and overall design work together to build “the best BMW motorsports vehicle that I’ve had the pleasure of racing” says BMW Motorsport veteran Bill Auberlen. 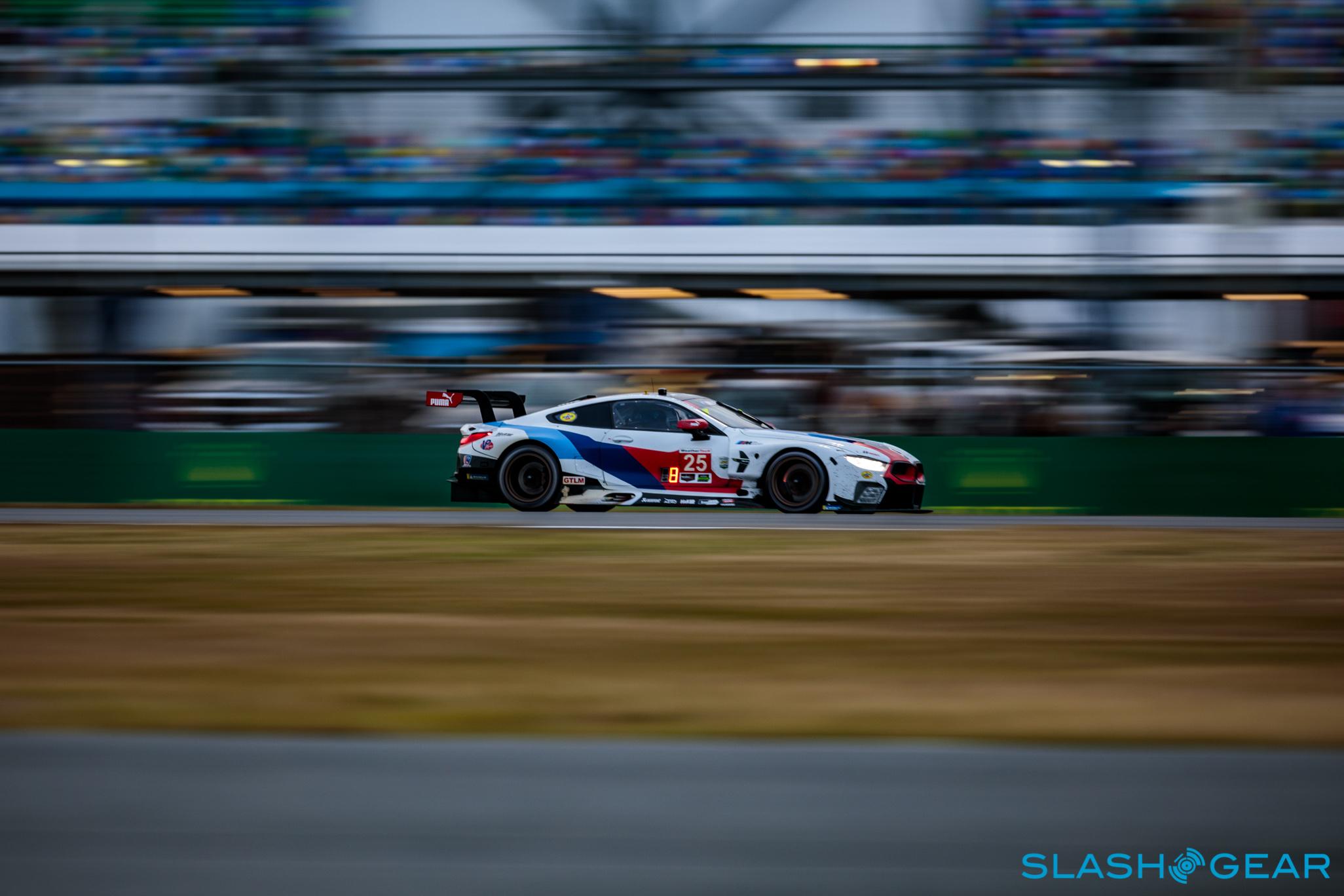 “The effort to run the car is very minimal so that you can run it at a high-performance level,” Marquardt concludes, “and you are not fighting the car, and you are enjoying it to drive it, and it’s important.” That certainly was the message I got from BMW drivers Martin Tomczyk and António Félix da Costa, who said they didn’t really want to relinquish the wheel during testing. It all adds up to a car that can seriously hustle, that all-important pace which guarantees you a good spot during qualifying. Now, that just needs to translate to winning some championships, as the M8 GTE paves the way for the hotly-anticipated M8 production car.