BMW has pulled the wraps off the all-new BMW 1 Series of cars marking the launch of the third-generation of the premium compact. The launch also shows off the new BMW front-wheel-drive architecture. BMW promises that the all-new 1 Series will still offer the driving pleasure and dynamic excellence that fans are used to.

BMW 1 Series buyers can opt for the optional xDrive AWD system if FWD doesn’t float your boat. BMW does say that the dynamic sharpness of the 1 Series is “unprecedented” in FWD cars. The first public unveiling of the car will be on June 25-27 at the BMW Group #NEXTGen presentation platform at BMW Welt in Munich.

The all-new 1 Series promises more interior space than the outgoing version, particularly for rear-seat passengers. The car comes in a 5-door model only and is 5mm shorter than the predecessor at 4,319 mm, 34mm wider at 1,799mm, and 34mm taller at 1,434mm. The new 1 Series also has a 20mm longer wheelbase at 2,670mm.

BMW says that the “sporting flagship” of the line is the BMW M135i xDrive offering combined fuel consumption of 7.1 – 6.8 l/100 km. The headlights feature an angled-in design and are full LED units and can be had as adaptive units. The BMW shark nose remains with a hint of a wedge shape, and while the design is fresh, it still looks unmistakably BMW. The car can be had with a panoramic roof and backlit trim strips. 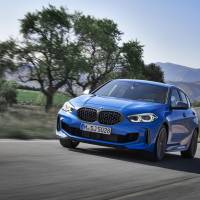 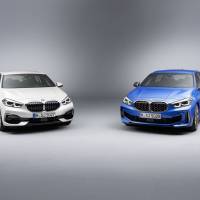 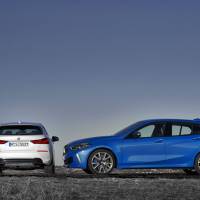 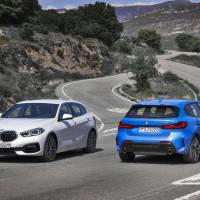 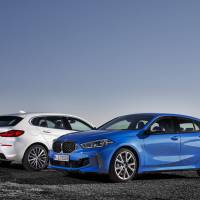 The car comes in three lines on top of the base Advantage model. The other lines include the Luxury Line, Sport Line, and an M Sport model. The car will have three diesel engines and two gas engines in Europe. The top of the line M135i xDrive model will hit 62mph from a standstill in 4.8-seconds.