We have covered our fair share of portable power stations that try to strike a balance between portability and power one way or another. Bluetti’s latest gamble, however, is unabashed standing firm on the power side but not without good reason. The Bluetti EP500 and its more power-packed EP500 Pro sibling definitely boast the largest capacity and biggest set of features we’ve seen on a mobile power station and that’s because, despite the wheels that help it move, it’s designed to stay at home and be the backup you need when your whole house turns dark.

Most portable power stations you might have seen all come in a boxy design with a handle on top that may or may not be foldable or flexible. The Bluetti EP500 and EP500 Pro are, of course, on a whole different level. Their 5120 kWh batteries aren’t meant to be carried, so it is no surprise that this “mobile” power station has a different interpretation of what mobile means. 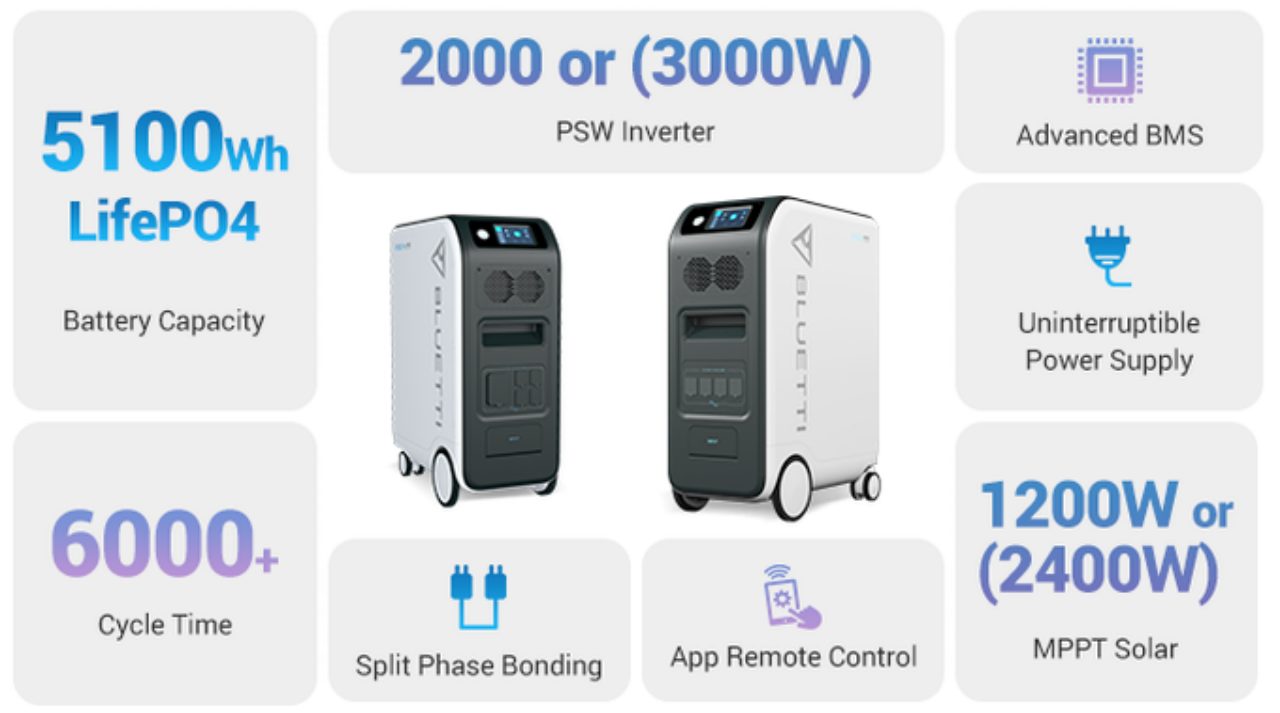 Instead of a short box, the Bluetti EP500 adopts a tall cabinet-like design that resembles some air purifiers or coolers these days. The asymmetric wheels, larger on the front than the back, is meant more for pushing and pulling it around the house or a campsite. At 76kg (167lbs) or 83kg (182lbs) for the Pro, you definitely won’t want to even try and lift this thing to get from point A to point B.

Despite the unusual design, at least for a power station, the EP500 and EP500 Pro still adhere to the most basic design rule for their kin. All the ports are in the front, both for output as well as input. Its flat surface even makes for a perfect wireless charging area, and, thanks to the fact that it’s longer than any other power station, it even has room for two of them.

The Bluetti EP500 also sticks to the convention when it comes to how it delivers all the power it packs, plus with some special tricks up its sleeve. Common to both base and Pro models are four USB-A ports, two of which support Qualcomm Quick Charge, two 12V/10A DC ports. one 12V/30A RV port, four 120V/20A AC outlets, and two wireless charging areas. The Bluetti EP500 has one 100W USB-C port while the EP500 Pro gets two. Also unique to the Pro model is a 120V/30A NEMA L14-30 AC outlet. 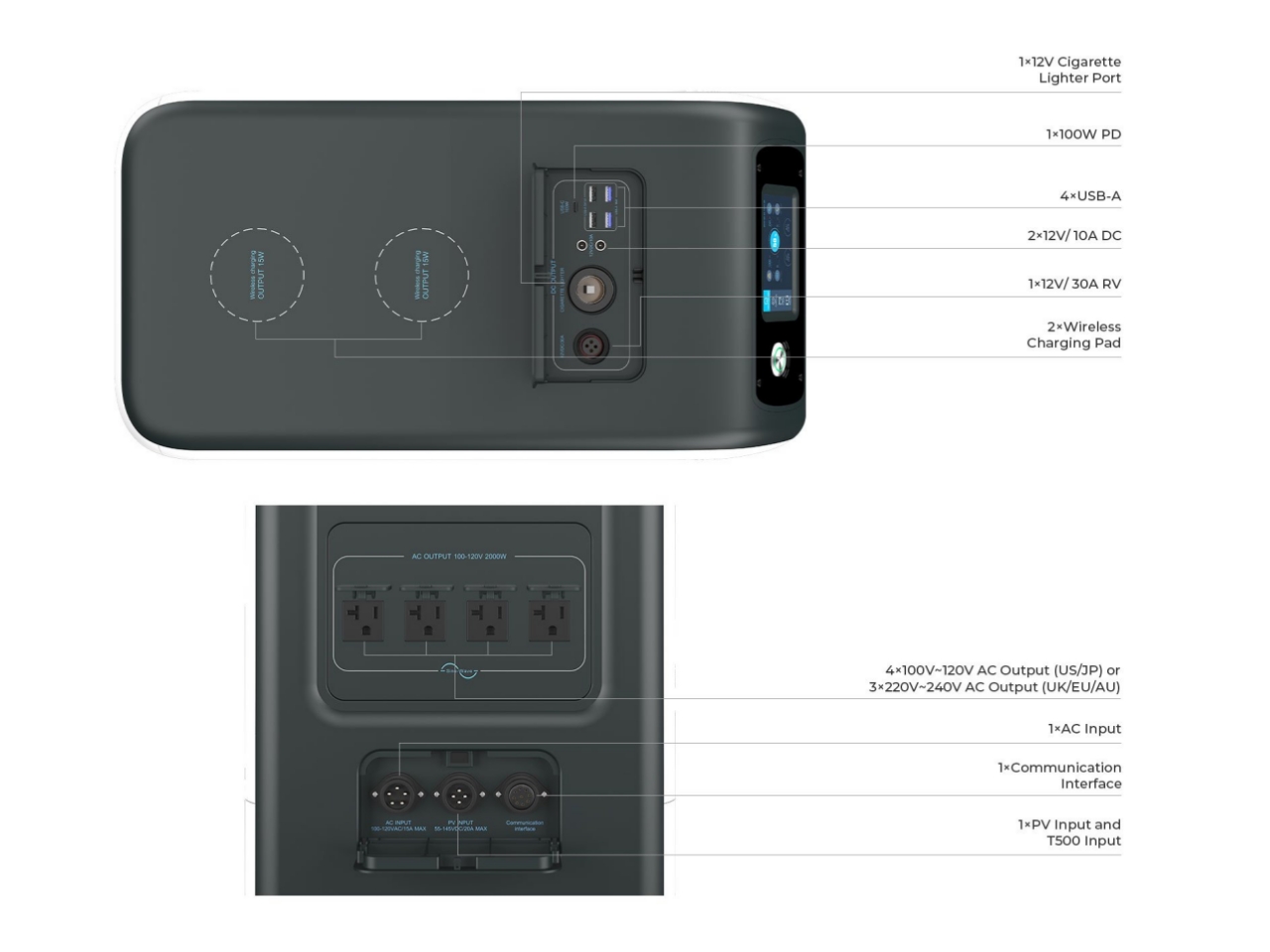 With a 5.1kW 2,000W battery, 3,000W for the Pro, the Bluetti EP500 can power practically anything you throw at it. Mobile devices and laptops are, of course, a piece of cake but even home appliances are no problem. That becomes especially important when you realize that, unlike most portable power stations, you might not even have to turn the EP500 on when the power goes off.

Light in the Darkness

Although it can definitely be used as an ordinary power station during an emergency, the Bluetti EP500 is really designed more like a UPS on wheels. In fact, by simply keeping the EP500 connected to an AC outlet and then connecting any appliance or device to it, the power station behaves like a “Flexible UPS” the moment power from the mains gets cut off. That way, you don’t even have to bother about disconnecting and reconnecting your devices during an outage. 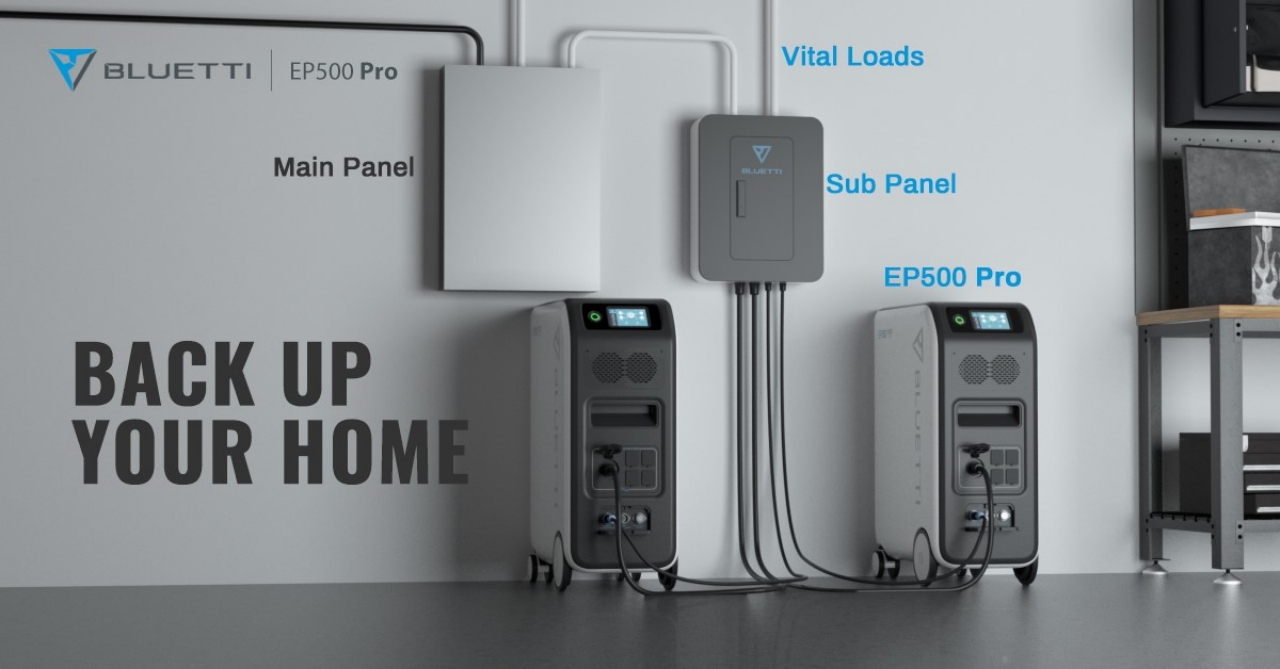 It becomes even more impressive, however, when you add the Bluetti Home Integration Kit, basically a Sub Panel you connect to your home’s main switchboard. Although it does require a professional to install things, this “Fixed UPS” setup is probably the most reliable since vital appliances will immediately switch to one or two EP500 power stations without interruption.

Yes, you can actually combine two EP500 or two EP500 Pro stations to double their capacity and output and you won’t even need that sub panel kit to do so. You do need the appropriate Fusion Box accessory, however, that adds a variety of output options, including a 240V/30A outlet. That will be enough to power even air conditioning units that are usually a big no-no for portable power stations. That said, you can only “fuse” two power stations of the same kind, so no mixing up the EP500 with the EP500 Pro.

With a larger battery, you can probably expect that the Bluetti EP500 will be charging almost twice as long. That is definitely true to some extent but, fortunately, the power station supports a variety of charging options, including some that do mix things up a bit.

Of course, Bluetti’s preferred power source is the sun, in line with its mission to provide clean, safe, and quiet energy. Thanks to MPPT support, a 2400W solar charging panel setup (sold separately) can fill up the EP500 Pro in just 2.6 hours, 4.75 hours for the EP500 with 1200W panels. You can, however, actually combine solar and AC input simultaneously to halve that charging time.

Most will probably charge the EP500 directly via an AC outlet and you can definitely use the single-cord solution for that. Bluetti, however, also has a T500 AC adapter you can add in tandem to reduce the charging time, but only by a bit. If, however, you already have your house equipped with solar panels, Bluetti will also offer a PV Voltage Step-Down Module to adjust that input and make it safe for the power station.

The Bluetti EP500 and EP500 Pro are currently available on Kickstarter as a sort of pre-order campaign. That it’s on a crowdfunding platform shouldn’t really worry you considering how it pulled $1 million in just its first hour and now stands at over $3 million with more than a month to spare. Be warned, though, it is quite a pricey investment but, considering the safety and health risks of a gasoline-powered generator and the comparatively shorter battery lives of more portable power stations, the Bluetti EP500 and EP500 Pro promise to give you the best ROI, especially when, not if, things do go dark in the night.