Blue Microphones, as their name suggests, are generally all about the audio, and they’ve a strong reputation among musicians for the quality of their hardware. The Blue Microphones Eyeball 2.0 takes the distinctive Blue Snowflake and discretely adds a pop-out 2.0-megapixel webcam; once we’d finished popping the lens in and out of its spring-loaded silo we set to work reviewing it.

You’re unlikely to mistake the Eyeball 2.0 as anything other than a microphone first. The shiny mesh-covered ball rotates on its twisting mount, and has a sturdy U-shaped metal bracket that – depending on orientation – either hooks onto the top of your laptop display or stands the Eyeball 2.0 up on the desk. On the back is a regular miniUSB port which you can use with the three foot USB cable Blue supply or any you might already have lying around. There’s also a plastic case section which slots onto the back of the Eyeball 2.0’s stand and gives you a place to tuck the cable for transport, together with a rubber disk that, slotted over the rear of the stand, acts as a counterbalance of sorts for using the webcam on top of CRT monitors.

At first glance you could miss the webcam functionality altogether, since the tiny lens is hidden in a spring-loaded nub at the side. Installation didn’t require any specific drivers; we simply plugged the Eyeball 2.0 in and both OS X and Windows recognized it straight away. From there it’s a matter of choosing the appropriate input in whatever app you’re using; on our MacBook Pro we were able to toggle between the Eyeball 2.0 and the built-in iSight webcam through the camera menu in Photo Booth. 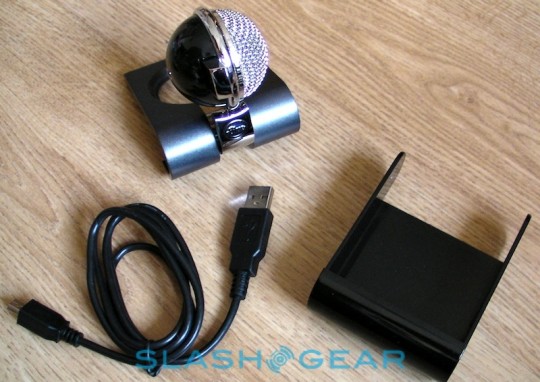 In comparison to the iSight, color balance was roughly on a par but the Eyeball 2.0 tends toward over-exposure. Still, there’s more detail and contrast, though fast moving subjects still lead to blurring when you’re recording video. The Blue webcam also has a slightly narrower field of vision.

As for audio, however, the Eyeball 2.0 comes into its own. More sensitive than the in-built microphones of the PC and Mac laptops we compared it with, it also boasts a more balanced range and less of a tendency to lose the bottom end to crunchy mess. Blue are positioning it as ideal for amateur musicians and podcast recorders, and we’d have to agree.

Problem is, the Snowflake offers the exact same audio performance without the somewhat underwhelming webcam functionality, and saves $20/£15 off the list price. With an MRSP of $79.99/£74.95 versus the $59.99/£59.95 of the Snowflake, we’d plump for Blue Microphones’ core skills with the latter and look elsewhere for our video needs.