It’s finally happened – Diablo III has been announced for release after over 10 years of waiting, hoping, wishing for its drop. Blizzard Entertainment, the creators of the game, have also been so kind as to grace us with a skill calculator so we can prepare for the playing of the game before we get it. This is the type of thing you’d normally only be able to do if you worked your way through the game so far that you’d have infinite skill points to add on to your character – now you’re able to do so before you even get there, easy prep!

This edition of the game will be coming out on the 15th of May, right before my birthday! That means that I’ll not only be surrounding myself with darkness that day, diving deep into the pits of hell for many hours on end, I’ll be having lots of classic Diablo fun at the expense of my enemies! And what better way to prepare for such devilish wanderings and choppings about that a fully prepared skill chart? Blizzard learned from their good friends in the fan sector this time around, creating this chart before the game has been released rather than 5 years after the game was already in motion.

What you’re going to be wanting to do here on the official skill chart page is tacking the points on to the skills you’ll want to develop to see how each skill works with the other. Should you have done this in-game, you may have been messing up and placing your precious skill points in categories you’ll never use. Don’t want that! Every level 99 players knows good and well: you need those points in the right places! 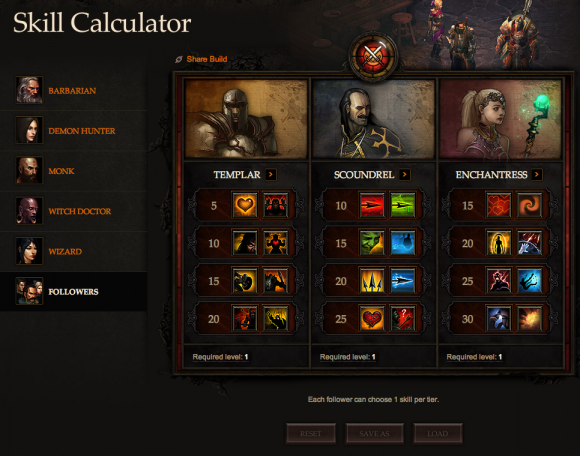 So get pumped up, pump up not only your future characters, but your Followers as well, and start stocking up on frozen pizzas, chips, and Mountain Dew, because you’re going to be in for the long haul! See you on Blizzard West when the time comes!