Blizzard is one of several companies to fall into the trap that is state-run media in the nation of China in the year 2019. Blizzard hosts gaming tournaments in China – it’s big business, and has the potential for big growth. China and Hong Kong are in the midst of political upheaval via a protest in Hong Kong that’s been in play since June of 2019. Because China wants to stop the protest, they’re pressuring all media (including Blizzard) to do away with any form of public protest on their network, lest they remove said media from China altogether.

What do Hong Kong protesters want?

Hong Kong citizens began to protest in June of 2019 against a legal bill that could mean an increase in China’s power over HK via legal extradition. China does not want this protest to continue. The original legal bill was suspended in June, then withdrawn in September of 2019, but protests continue. You can read an expanded account of demands at The Guardian – from mid-August of 2019, or see a Focus Taiwan article from late August with a slightly different translation.

Hong Kong citizen protest’s 5 demands include:
• A withdrawing of the extradition bill (achieved in September)
• Resignation of HK Chief Executive 林鄭月娥 (Carrie Lam)
• A guarantee of no prosecutions of protesters after protest settles
• End to labeling the protests as “riots”
• Establish an independent committee to investigate alleged police brutality against protesters*

*This also included a demand to hold accountable the police officers who allegedly fired rubber bullets at protesters, amongst other brutal treatments.

Blizzard held and continues to hold gaming tournaments in China. A recent incident occurred on October 5/6th in a post-game interview for the game Hearthstone. As shown by Invenglobal, said interview had Hearthstone gamer BlitzchungHS voice his support for the Hong Kong protesters – you’ll see that streamed interview below:

The gamer Blitzchung provided a comment to Inven Global on the situation after the stream. You’ll find that comment in the image below. 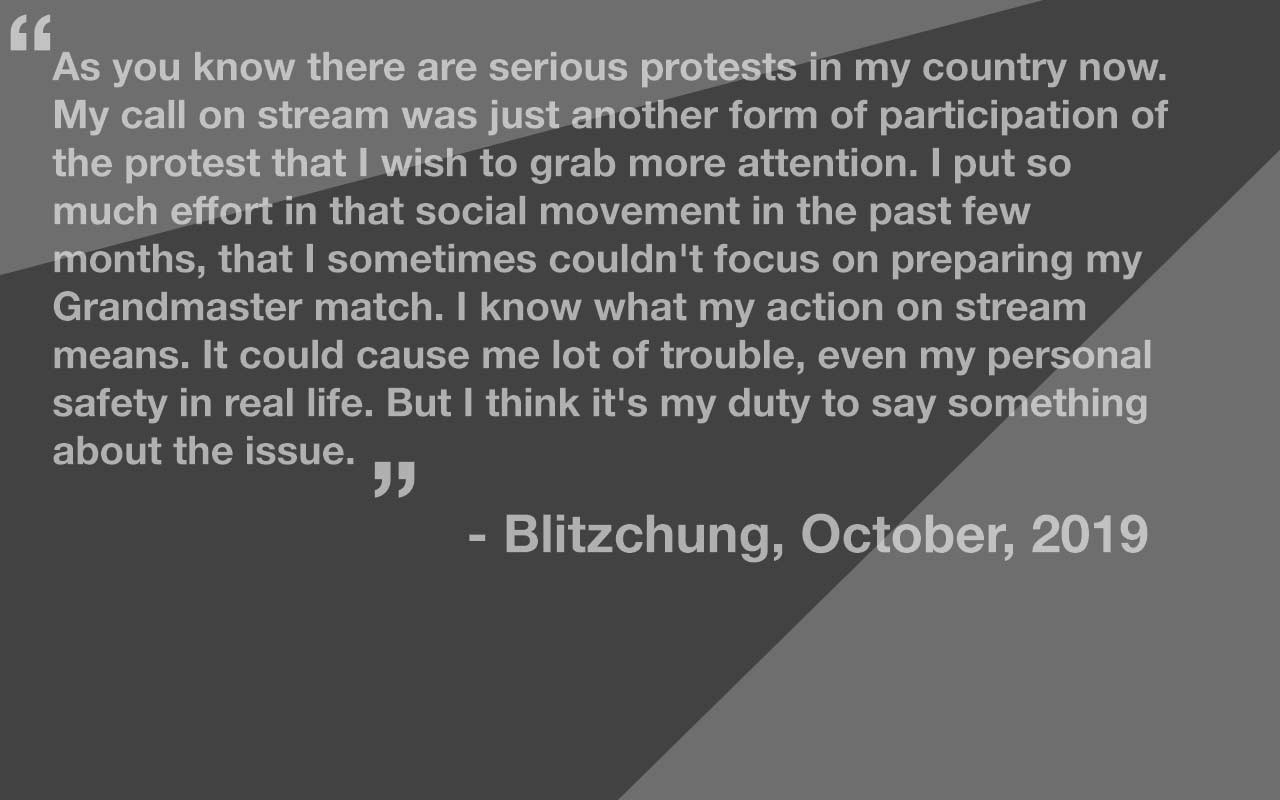 Blizzard then stated that they’d removed Blitzchung from the tournament, rescinded all prizes he’d already earned in gameplay, and banned him from Hearthstone esports for one year. Blizzard also said they immediately “ceased working with” both hosts of the stream/interview. These are the same hosts who, upon realizing Blitzchung was commenting on HK, both ducked below their computers to avoid being seen as associated in any way at all. 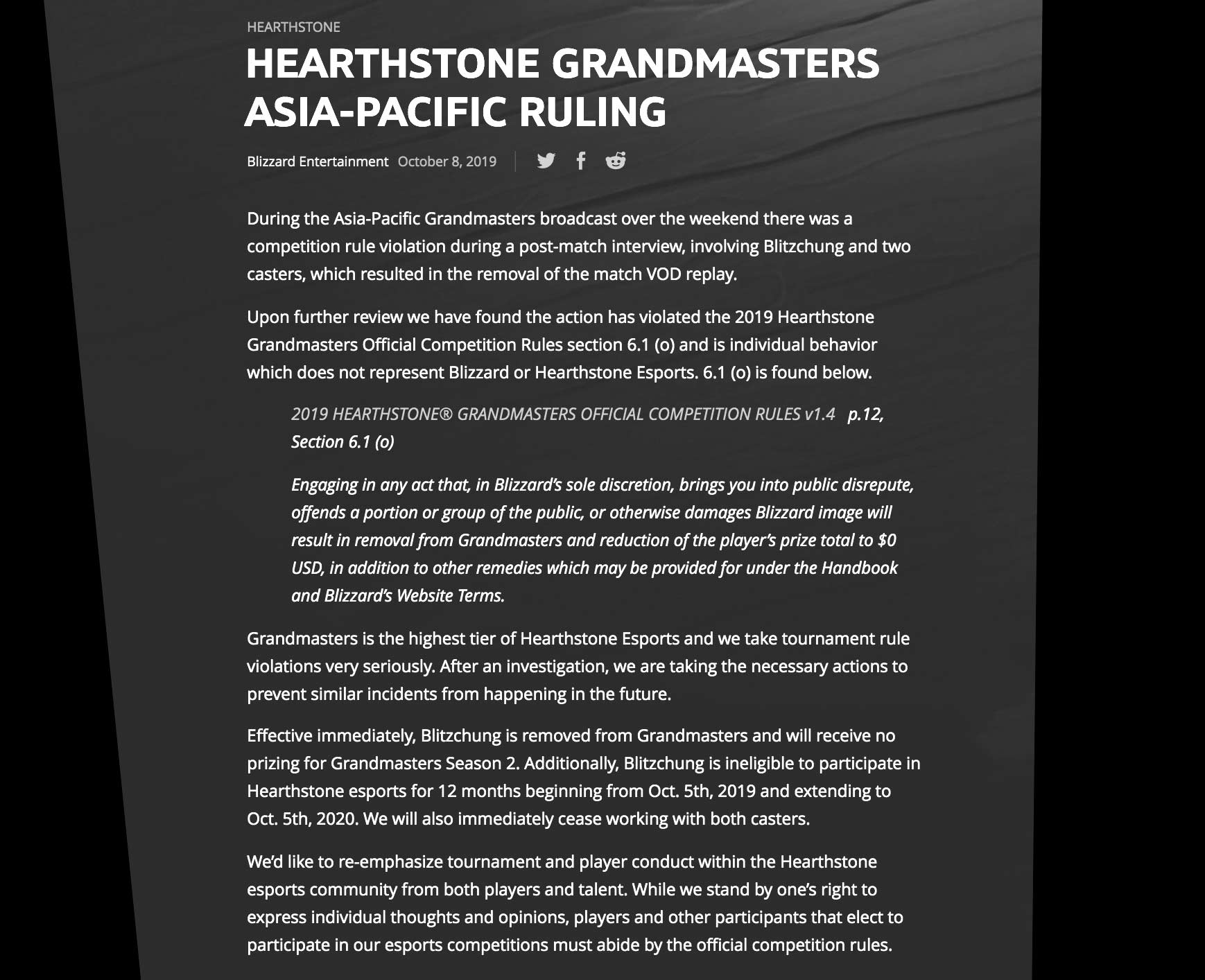 Above you’ll find the full statement from Blizzard on the matter. This was posted on October 8, 2019. The key bit is the quoting of their rule which reads as follows: “Engaging in any act that, in Blizzard’s sole discretion, brings you into public disrepute, offends a portion or group of the public, or otherwise damages Blizzard image will result in removal from Grandmasters…”

A recent very similar incident with the NBA (the USA-based National Basketball Association) sheds some light on how the Chinese government feels about the Hong Kong protests and public speech in support of said protests. In that incident, the NBA team Houston Rocket’s general manager Daryl Morey posted on Twitter about the Hong Kong protests with an image that included the text, “Fight for Freedom. Stand with Hong Kong.”

From the Time magazine report on the NBA incident, we see that early messaging from the NBA seemed to disparage the Tweet and apologize to China. Then a follow-up from NBA Commissioner Adam Silver said that while he and the NBA were ‘apologetic’ that Chinese officials and fans were apparently upset by Morey’s tweet, Morey had the right to send said message.

Per Silver, “What I also tried to suggest is that I understand there are consequences from his freedom of speech and we will have to live with those consequences.” Per the Time article, consequences were swift, including the removal of broadcasts of NBA games taking place in the near future in Shanghai and Shenzhen.

“But freedom of speech is not absolute: it does not include speech that challenges China’s national sovereignty and social stability,” said a CCTV message on the matter. “The argument provided by Morey and Silver reflects their contempt for the Chinese people.”

A very similar statement was provided to the press by CCTV on October 8. “We’re strongly dissatisfied and oppose Adam Silver’s claim to support Morey’s right to freedom of expression” said a CCTV representative in a statement published by Reuters. “We believe that any remarks that challenge national sovereignty and social stability are not within the scope of freedom of speech.” 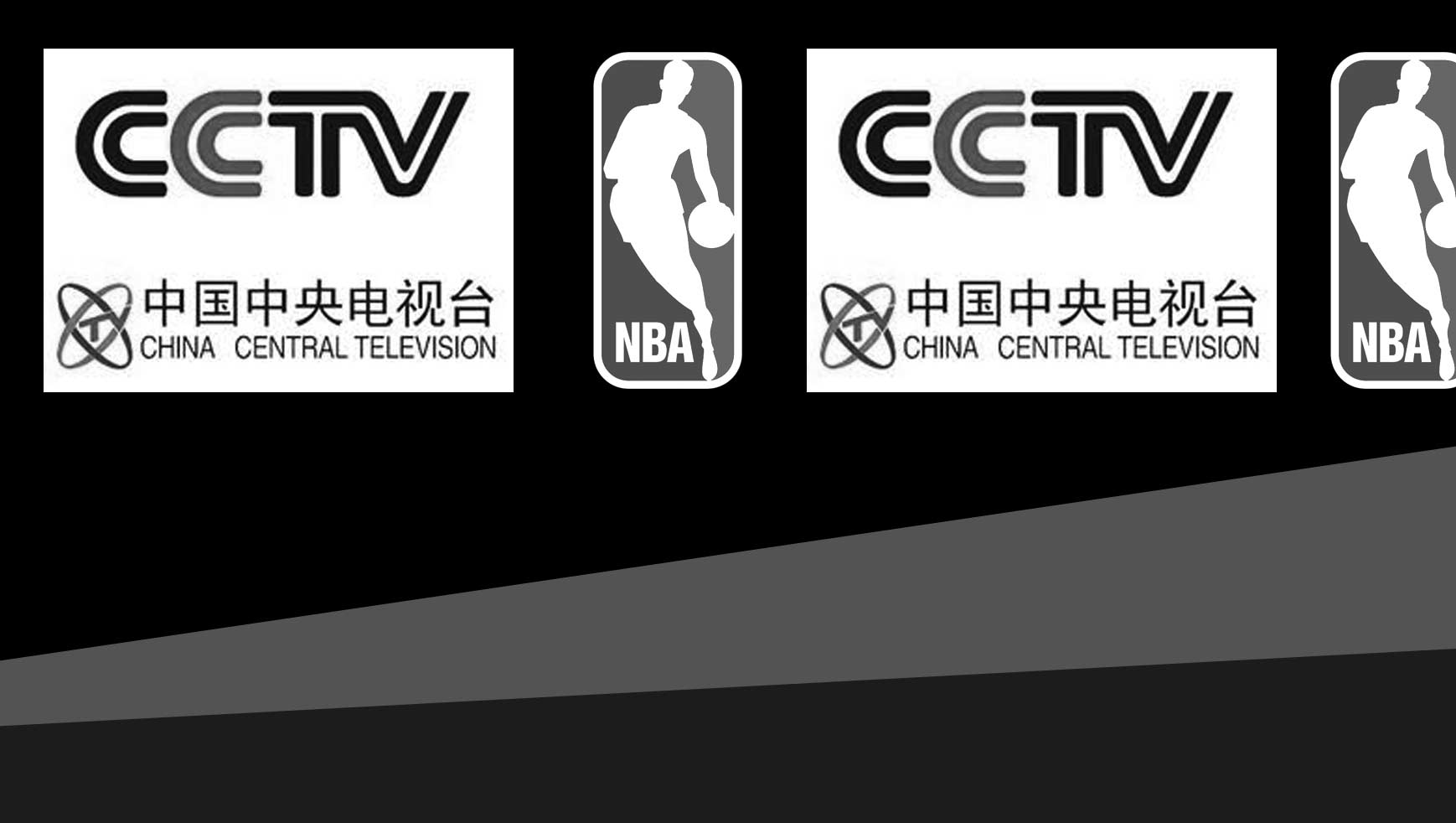 By the year 2020, China will have approximately 1.44-billion citizens. The United States will have around 331-million citizens in 2020. In the incidents above, the Chinese government appears to be using their population of potential consumers as leverage to attempt to control the actions of United States-based businesses.

From a business perspective for the NBA or Blizzard, it’s likely a matter of weighing the fallout from an angry Chinese government or the fallout from consumers across the rest of the world. Is a boycott of Blizzard products in the USA more damaging to Blizzard’s future than whatever China’s government would do if they refused to censor talk of protests?

Blizzard went one way, the NBA went the other. Who’s next? And what might this mean for the future if we find brands like the NBA and Blizzard reacting like they have in the incidents outlined above?

NOTE: The population figures above are according to the United Nations DESA/Population Division and was retrieved on October 10, 2019. This figure was part of the “World Population Prospects 2019” listing system.