Mention all-touch and BlackBerry in the same sentence, and it’s tough not to experience an involuntary Storm-shudder. RIM’s belated answer to the iPhone failed to grab it the chunk of the touchscreen smartphone market it expected, and while the Storm 2 was an improvement, the company is yet to entirely convince when there’s no physical keyboard. Third time lucky, perhaps, with the BlackBerry Torch 9850, a compact BlackBerry 7 smartphone (aka the Torch 9860, the only difference being CDMA/GSM connectivity) hoping to convince us that QWERTY-free doesn’t mean zero appeal. Check out the SlashGear review after the cut.

Where both Storm handsets were chunky and masculine in their styling, the Torch 9850 flexes some curves. It’s a lightweight phone, at 4.76oz, and slim too, measuring in at 4.72 x 2.44 x 0.45 inches. A bulge on the back contains the 5-megapixel autofocus camera and LED flash, capable of 720p HD video recording, while the front is dominated by a 3.7-inch 800 x 480 display.

There’s no too-clever-for-its-own-good virtual clicking here, just a regular capacitive LCD TFT touchscreen that’s reasonably bright and responsive. Underneath are the usual send, end, menu and back buttons, flanking an optical trackpad which we found too low on the fascia to convince us to use it instead of the touchscreen. Keeping things running is the same 1.2GHz single-core processor as in the Torch 9810, again paired with 768MB of RAM. 4GB of integrated storage can be extended by up to 32GB with a microSD card. 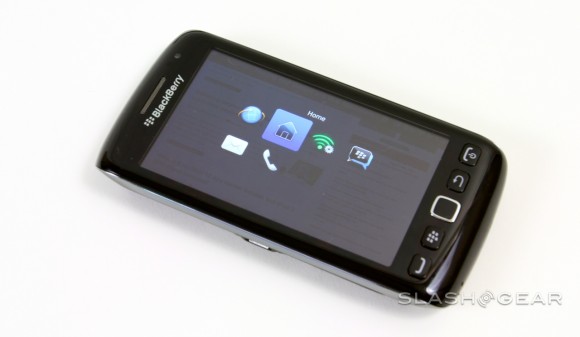 Connectivity includes CDMA EVDO Rev.A along with quadband GSM and single-band 2100MHz UMTS/HSPA, making the Torch 9850 a so-called “world phone” capable of voice and data outside of North America. There’s also WiFi b/g/n, Bluetooth 2.1+EDR and microUSB 2.0, a headphone socket and GPS/AGPS, though no NFC as in the Bold 9900.

The downside to the light weight is somewhat plasticky construction, and the 9850 is a fingerprint magnet thanks to its glossy finish. The battery cover is matte, but the fake chrome trim and entire front soon get shiny with fingerprint grease.

The Torch 9850/9860 helps debut BlackBerry 7, RIM’s latest OS for smartphones. It’s not the QNX we’re waiting for – that won’t arrive on phones until 2012 – but it borrows some of the UI cues from the QNX-based PlayBook and the end result is a tighter user-experience than previous all-touch BlackBerries.

Performance is swift thanks to the 1.2GHz processor, only showing some lag when pinch-zooming in the WebKit-based browser. That’s a shame, as the WVGA display offers the best internet experience of the new BlackBerry trio. It may lack the resolution of, say, the iPhone 4, and the web performance overall can seem sluggish on heavier pages when compared to dual-core Android devices, but it no longer feels quite as much of a struggle as the Storm and Storm 2 did. 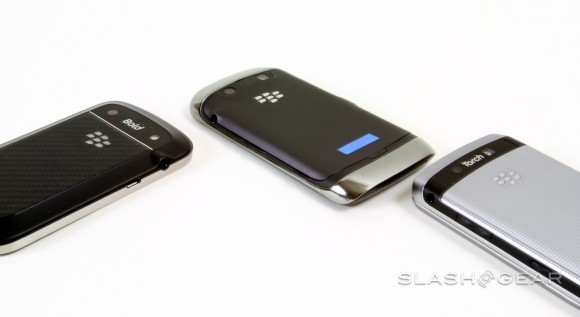 For a company known for its physical keyboard prowess, switching to a virtual ‘board obviously comes with a learning curve. Unfortunately, the on-screen layout still falls short of what we’ve seen on other all-touch devices: in portrait orientation, the key spacing is a little too close for decent accuracy, for instance, though landscape orientation is better. What RIM needs is a slick predictive system, like Swype, which could introduce some intelligence to counter the lack of physical keys.

Given the slim profile of the 9850, we were concerned the BlackBerry might fall short when it came to speaker or signal performance. Happily neither is the case, with the Torch clinging to a signal well and audio through both the earpiece and the speaker sounding good, if a little shallow when it comes to low-end audio.

Battery life from the 1,230 mAh user-replaceable li-ion pack in the 9850 is quoted at up to 6.8hrs of CDMA talktime or up to 13.4 days of CDMA standby. The 3G equivalents are slightly less. In practice, we managed more than a day of full use out of the Torch, though you could certainly prolong that for considerably longer by playing with the sync settings.

The Torch 9850 is a solid, capable little smartphone, and BlackBerry 7’s UI arguably suits the all-touch display most of all. With the 1.2GHz processor RIM’s handsets no longer feel like the slowest devices in the pack, and while we’d welcome more metal and less plastic in the construction, the styling is a reasonably successful compromise between classic RIM functionality and the curviness of a consumer device. 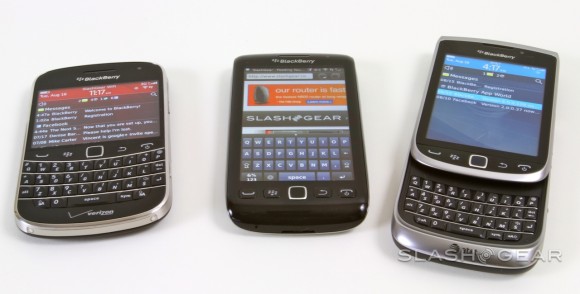 With little in the way of must-have features however, it’s tough to recommend the 9850 to those who would otherwise be considering an iPhone or Android device. RIM’s strength has always been in its text entry and messaging talents, but while the IM/BBM/email combo is present, the onscreen keyboard underwhelms. Third time’s the charm when it comes to RIM’s attempts at an all-touch device, but while the Torch 9850 is far better than the Storms that came before it, it still lacks the stand-out appeal that could break it out of the BlackBerry niche.