It’s been more than a year since we reviewed the BlackBerry Torch 9800, RIM’s hybrid touch/QWERTY slider, and while the company says the smartphone has gone on to be one of their more popular devices, we couldn’t get past the underwhelming screen resolution and easily choked processor. Now, RIM has returned with the BlackBerry Torch 9810, with a faster CPU, more pixels and a copy of the BlackBerry 7 OS. Is it enough to flick the Torch onto full-beam? Check out the SlashGear review after the cut.

If it weren’t for the new silver color, you’d easily mistake the Torch 9810 for its 9800 predecessor. The casing and general design are identical, the phone being a somewhat chunky 4.37 x 2.44 x 0.57 inches and 5.68oz; a quick nudge with the thumb and the 3.2-inch touchscreen slides up to reveal the traditional RIM keyboard. The display is one half of RIM’s big hardware update, now running at 480 x 640 rather than the crunchy 360 x 480 of the 9800. It’s reasonably bright and clear, and the touch responsive. 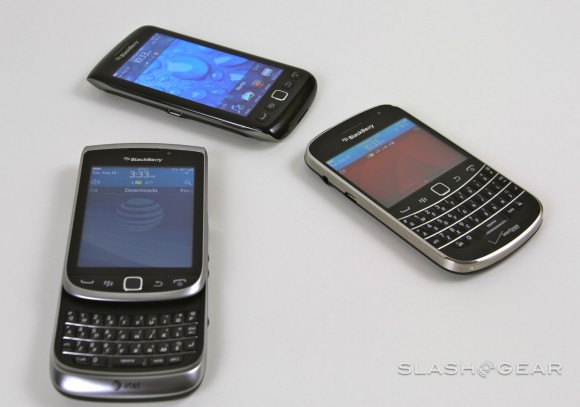 Physical controls include the same optical trackpad and dedicated send, end, menu and back buttons as before. The QWERTY has less travel than on, say, the Bold 9900/9930 but is still highly usable. On the back is the 5-megapixel autofocus camera with LED flash from the 9800, though now capable of 720p HD video recording. Connectivity is triband UMTS/HSPA with 14.4 Mbps downloads supported along with WiFi b/g/n, Bluetooth 2.1, USB 2.0 and a microSD slot to augment the 8GB of integrated storage. What you don’t get is NFC, unlike the Bold 9900/9930. 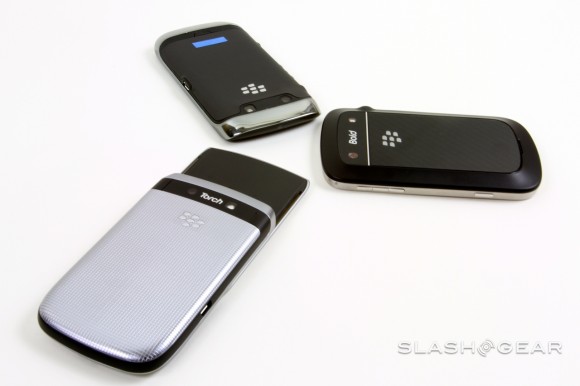 The other significant change for the Torch 9810 is the processor. Where the original Torch had a frankly pitiful 624MHz CPU, RIM has pretty much doubled that for the new model and slotted in a single-core 1.2GHz chip. It’s paired with 768MB of RAM, up from 512MB.

RIM is pushing BlackBerry 7 as being a significant step up from previous 6.x iterations, though in reality it’s still relatively incremental. Aesthetically it has borrowed a little UI gloss from QNX on the BlackBerry PlayBook, though we’ll have to wait until 2012 for the first true QNX-based BlackBerry smartphones. The WebKit browser is a solid upgrade from the mediocre example on the 9800, and thanks to the 1.2GHz processor it – and most of the rest of the OS – run far quicker. There’s little of the lag when moving between apps, though pinch-zooming webpages can still lead to some jerkiness. Perhaps that’s down to RIM’s animation rather than a shortcoming in the app, but the end result is that it simply feels less polished than, say, browsing on an iPhone.

The Torch 9810 unsurprisingly does well when it comes to messaging, with email, SMS and IM – including BBM – all reminding us why BlackBerry devices have found lingering favor with enterprise users and chat-obsessed teens alike. Unfortunately, if you’re used to the bulging third-party software catalogs on iOS or Android, the BlackBerry App World will be a distinct disappointment. The range is far smaller, and many apps demand a fee whereas similar functionality can be found free in the Android Market or iOS App Store. 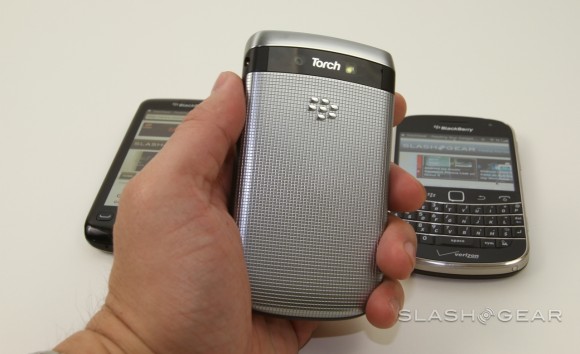 Audio performance from the 9810 was much akin to its predecessor, with solid earpiece and speakerphone sound and a decent microphone. We had no trouble keeping a signal, either. RIM is yet to announce a CDMA version, so for now it’s GSM or nothing.

The spec sheet suggests up to 6.5hrs of GSM talktime from the Torch 9810’s 1,270 mAh battery (or 5.9hrs 3G talktime), or up to 307hrs of standby. With the smartphone set to check for new messages and social networking updates as frequently as possible, we managed a full day of use with power to spare.

On the one hand, RIM has done just what we asked it to: given the Torch a faster turn of speed and a better display. Unfortunately, we asked for that twelve months ago, and otherwise – BB7 and 720p video notwithstanding – it’s basically the same smartphone as created a middling impression back in 2010. 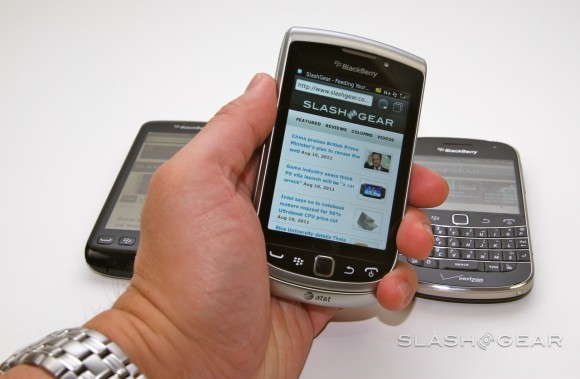 While RIM has been playing catch-up, the rest of the smartphone landscape has changed dramatically. qHD and similarly high-res screens are now common, dual-core processors are no longer solely the preserve of top-tier Android phones but filtering down into more affordable models, and against that the Torch 9810 – despite being new today – already looks dated. When the fifth-gen iPhone arrives later in the year, it’s tough to see how the BlackBerry will stand a chance. RIM’s tweaks will appeal to die-hard 9800 owners, but the Torch 9810 is not the device to break the company out of its existing user-base.