Today was a big day for RIM. At BlackBerry World, they needed to impress customers, developers, and the tech press with BlackBerry 10, and while it doesn’t seem like a slam dunk, what has been seen so far seems to have been met with a positive reception. It’s been a busy day, but so far we’ve seen a BlackBerry 10 Dev Alpha device, basic functionality of the OS, and a demo of various apps coming to the platform.

First, RIM showed off the developer hardware that would be used to create apps for BlackBerry 10, the Dev Alpha device. It features a 4.2-inch screen with a 1280×768 resolution, 16GB of storage, 1GB of RAM, an HSPA+ radio, along with a mini HDMI port and microSD card slot. The device isn’t actually running BlackBerry 10, instead running PlayBook OS, but various hooks and calls are available so that developers can start building apps now for final hardware later on.

The Canadian company then showed off some of the functionality that would be coming to BlackBerry 10, with a large emphasis on gesture based controls. Swiping would reveal notifications, and allow you to move through app menus seamlessly instead of relying on menu items. The keyboard was also shown off, riffing off the current BlackBerry hardware keyboards, with support for word prediction and gesture based alternate keys. 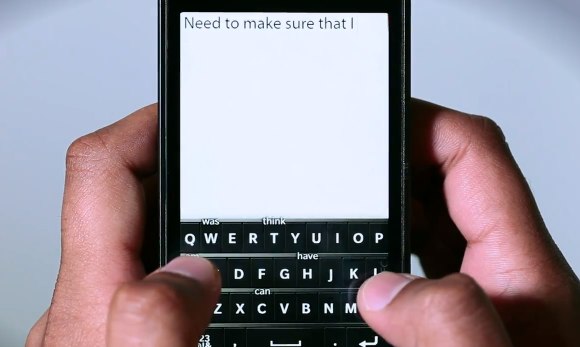 Gaming was also teased, with Gameloft announcing that they would be bringing 11 games to BlackBerry 10, including N.O.V.A. 3. The game was briefly shown running, showing good graphics, and Fish Labs also made an appearance, praising the PlayBook for how easy it is to port games to the platform (they converted Galaxy on Fire in a single day), and the lack of piracy. A subtle jab at Android, perhaps?

Other apps will also be gracing BlackBerry 10, such as a magazine app created by PixelMags. The company has previous experience working with magazines to bring them to iOS and Android, and the PlayBook along with BlackBerry 10 will also be graced with some on-the-go reading. There was nothing groundbreaking about the app, with a familiar user interface, but RIM did say there would be 10 minutes of free reading each month. After that, an unlimited reading subscription would be available to purchase. 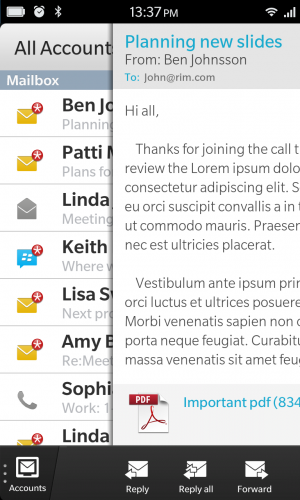 Developers will be able to download the BlackBerry 10 SDK starting from today, and developers at BlackBerry World were handed free Dev Alpha devices for testing. The WebWorks SDK will also allow HTML5 applications to be developed for cases where a native app might not be suitable.