BitTorrent Bleep “bleeps out” your chats from prying eyes

BitTorrent, the company, will perhaps forever be remembered for creating bittorrent, the file sharing protocol. However, the concept of a serverless system of sending packets to and fro the Internet isn’t just useful for downloading large videos and files, legally acquired or otherwise. It can also be used to ensure secure and private communication lines, as Bleep, BitTorrent’s latest product, tries to demonstrate.

Serverless, decentralized peer-to-peer (P2P) networking is nothing new, as those who used software like Limewire and iMesh can attest to. BitTorrent, however, can be credited for having popularized the technology when it became a household name. It has uses beyond the media sharing activities that has become notorious these days. Without a central server to connect to, two nodes in a network can directly connect to each other, decreasing the likelihood that user’s data will be stored in one location that can be accessed by people with malicious intent, or by the government.

Bleep is the latest application of this decentralized technology from BitTorrent, who also worked on a cloud-based storage ala Dropbox called BitTorrent Sync. “BitTorrent Chat”, as it was called when it was revealed September last year, uses pretty much the same principles, except with a bias towards chats and voice calls. It establishes a direct, decentralized communication line between two peers, without the need for a server to handle connections, routing, and all of that. It makes use an upgraded DHT (distributed sloppy hash table), the same DHT used for “trackerless” torrents, but completely encrypted to ensure privacy and security. DHT is used only to look up two peers, but the communication between the two of them afterwards is direct. 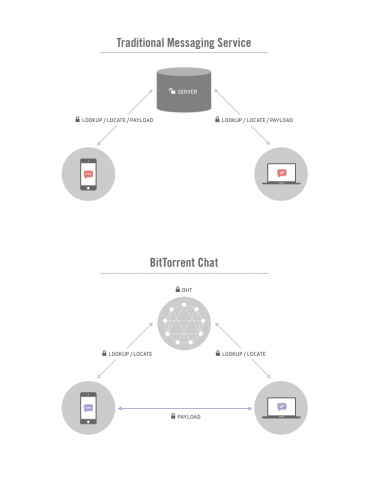 The use for Bleep goes beyond people who might want to hide something. BitTorrent lists use cases that include friends that just want to keep things private between groups, journalists wishing to protect their sources, businesses that need to keep internal communication private, and even governments that have an even greater and graver need for secure and private lines. Basically anyone who wants what they say, via text or voice calls, to be bleeped out can find a use for Bleep.

Bleep is currently still in a pre-alpha stage of development but BitTorrent is opening the doors for those willing to test the system and live with the expected bugs. At the moment, Bleep is limited to only Windows 7 and 8, desktop version, with more platforms planned for the future. It is also limited to communicating with contacts, which you can import from your Google account, who are currently online. Users who get to be accepted as a tester register using their email, phone number or can even opt to go all incognito. They can also invite others to join in, after all it wouldn’t be of much use if you have no one to talk to over the network, but they’ll also have to meet the requirements above. 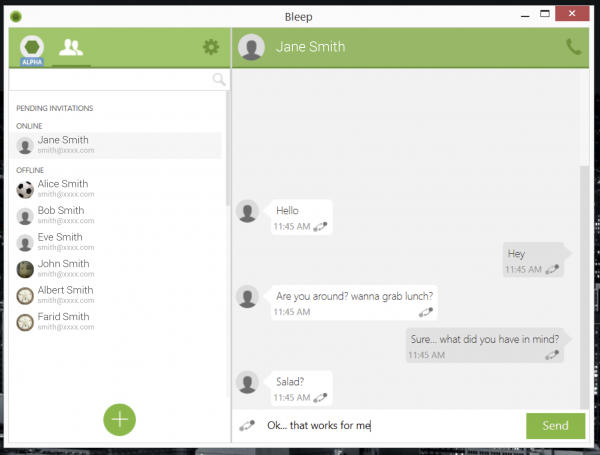