Bitcoin has seen a surge in recent weeks, sitting with a value of around $54,000 as of Friday, February 19. The cryptocurrency has reached a $1 trillion market capitalization. The milestone follows Tesla’s recently revealed $1.5 billion Bitcoin purchase, as well as tweets about the cryptocurrency from Elon Musk, which helped fuel public interest in the volatile coins.

Bitcoin, the number one cryptocurrency, experienced its first major spike in value back in 2018 before dipping slowly, only to resurge in the latter half of 2019. Growth has had ups and downs since then, with the value of a digital coin once again climbing significantly in recent months — and spiking drastically over the past few weeks.

According to CoinMarketCap, bitcoin is currently worth nearly $55,000 per coin, pushing its market cap past the $1 trillion mark. The cryptocurrency has grown significantly since its official launch in January 2009, gradually earning its place as a valid currency for buying goods from select major companies. 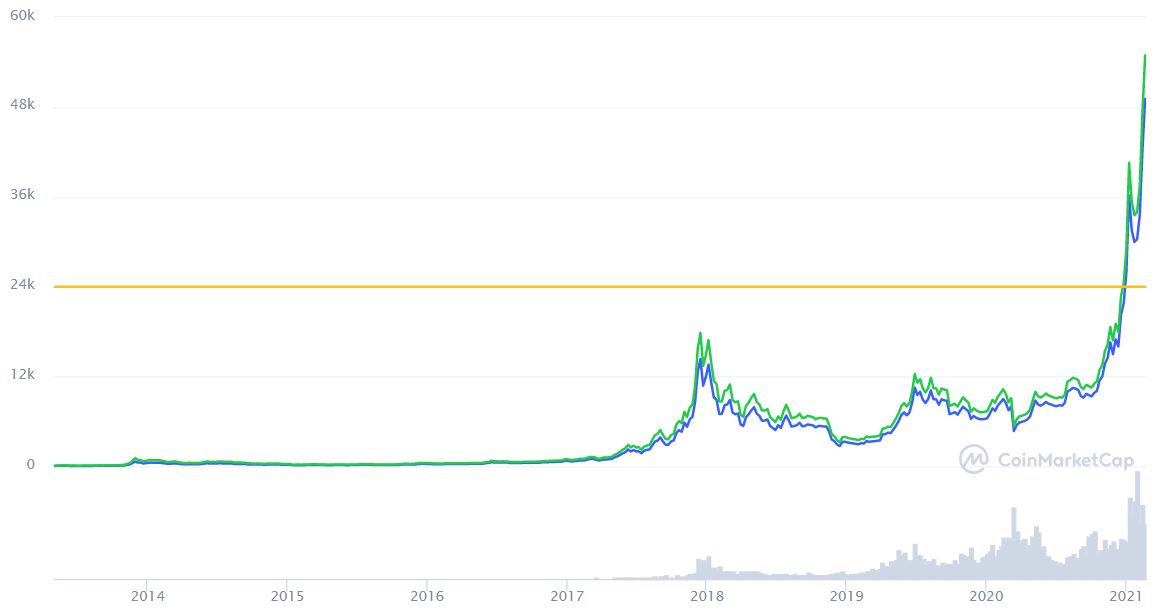 Bitcoin retains its fair share of adherents and critics, with mainstream interest in the cryptocurrency growing. The average consumer can now easily acquire their own bitcoin using ATMs through which physical cash is paid — some of which also support selling your bitcoin to get cash in return.

At this point in time, bitcoin dominates around 60-percent of the market, at least among the cryptocurrencies tracked by CoinMarketCap. Though many remain skeptical about the cryptocurrency, a number of large entities are adopting bitcoin, including the Bank of New York Mellon, which made its announcement earlier this month.