Researchers at Festo have announced the creation of a new bionic project called the “BionicSwift.” The robotic bird can fly using artificial feathers. The researchers used radio-based indoor GPS with ultra-wideband technology to allow the robotic birds to fly safely in a coordinated pattern inside a defined airspace. One feature that gives the birds their agility is that the wings are modeled on the plumage of real birds.

The robotic bird uses lightweight structures at the core of its construction. Low weight is critical because the less weight there is to move, the less material is needed. The BionicSwift weighs 42 g and has a body that is 44.5 cm long with a wingspan of 68 cm. The designers say the proportions make the robotic bird very agile and nimble.

The bird can fly loops and make tight turns. The designers created the wing of the BionicSwift models closely as possible on a natural wing with bird feathers. The individual lamellae are made from very lightweight and flexible but very robust foam that overlap each other. The feathers are connected to a carbon quill and attached to the actual hand and arm wings as an unnatural model. 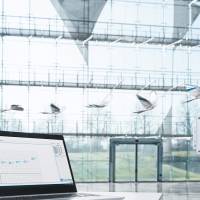 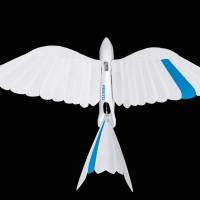 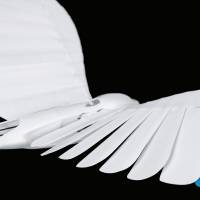 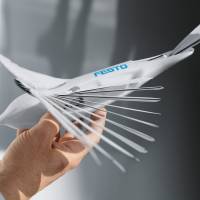 On the wing upstroke, the individual lamellae fan out, and then they close during the downstroke to provide the flying robot with a more powerful flight. The designers say that the close replication of actual bird wings gives the BionicSwift a better flight profile than previous beating wing drives. Inside the body of the robotic bird are the mechanics needed for the wing flapping mechanism, communication tech, control components, the tail, brushless motor, two servos, battery, gear unit, and various circuit boards.

Flight of the robotic birds is coordinated using radio-based indoor GPS with ultra-wideband technology. The team mounts several radio modules in the space forming fixed anchors that locate each other and define the controlled airspace. The system can use preprogrammed paths to plan and determine routes and flight paths for the birds. The robotic birds can correct flight paths autonomously with no input from humans.