Bionic Leg the Next Step in Prosthetics

There have been great advances in the use of prosthetic limbs, making them lighter, more comfortable, and easier to move. Scientists at the Rehabilitation Institute of Chicago’s Center for Bionic Medicine are working on a project to create a robotic prosthesis that would be controlled by the person’s own nervous system, and powered so that it can move on its own.

Hailey Daniswicz, 20, lost her lower leg to bone cancer in 2005, and is training a computer avatar to recognize slight movements in her thigh. She has electrodes attached to nine different muscles in her thigh, and can see her progress on the screen as she flexes and moves her muscles. The computer begins to recognize the intent of the user over time. 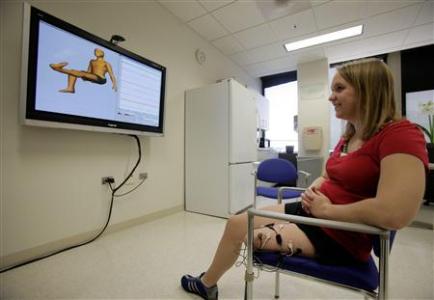 Daniswicz is participating in a clinical trial sponsored by the U.S. Army. The study uses electromyography (electrical signals produced by muscles) and pattern recognition computer software to control the next generation of robotic limbs. She will eventually be fitted with a robotic limb.

“We’re really integrating the machine with the person,” said Levi Hargrove, a research scientist at the Rehabilitation Institute of Chicago’s Center for Bionic Medicine who is leading the project.

The electrodes act as antennas, picking up electrical signals sent from the nerves to the muscles. These signals are fired in a specific pattern, so the computer can recognize how the person wants to move. “The way most prosthetics work now is you have mechanical sensors. You have to push and interact with them,” Hargrove said. “With this, you measure the actual neural intent and have that tell the motor what to do.”

The researchers have already developed prosthetic arms that use nerve impulses to operate. A leg is the next step. One surprising finding is that patients were able to operate the ankle joint as well as the knee joint. Researchers had thought that would require surgery implanting additional nerve endings to accomplish. The fact that it does not require surgery makes the population of people who will be eligible to receive these robotic legs very broad.

Right now, most prosthetic legs are pretty passive. They are operated by the user swinging them out. This robotic limb would be powered, and move on its own. It would be a much more natural movement. It is too early to say now when these would be available, but we are close than we’ve ever been before.