Microsoft has completely redesigned Bing Maps, it has announced, doing so from a place of ample user feedback and big ambitions. The updated maps are currently in a preview that is available to anyone who wants to opt-in to it, assuming that person is located in the US/UK, Canada, Australia, India, Indonesia, Malaysia, or South Africa. Anyone outside of those regions will eventually get access to it, but it won’t be for a little while. The update pulls in a bunch of data and presents it all in one place, including a new layout and handy “results card”.

The new Bing Maps features cards that organizes data from searches — as you can see in the screenshot, it is located on the left side of the display the same as in Google Maps. There are some improvements, though, over it such as showing collapsed cards for multiple places in addition to the one you’re currently viewing. The business data is collected with it — things like address and phone number. 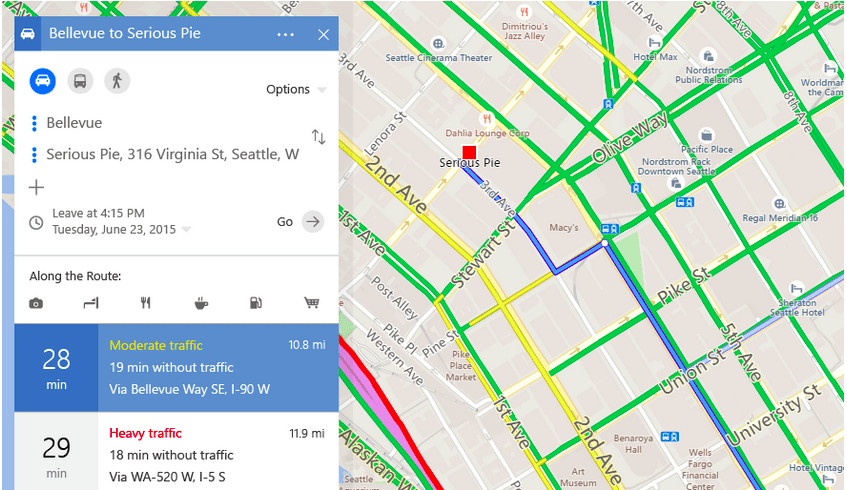 In addition, the preview shows a new layout that is touch-friendly and, says Microsoft, more intuitive for users. Right-clicking pulls up a bunch of options like saving something as a favorite.

Predictive routing promises to make navigation easier by giving users the ability to put in both a destination and the time of day they plan to travel to see the estimated travel time based on anticipated conditions (the travel time is different for rush hour, for example). “Along the Route” brings venue discovery along routes for users in the US.

Streetside views, meanwhile, bring split-screen functionality for an additional streetside view with your browsing. Users can save things in “My Places” like a beloved or common destination, and travel plans can be shared with others.