The Biden Administration wants 500,000 EV chargers across the US, and now the White House is explaining just how that’ll roll out – and some of the new technology it’s counting on to make zero-emissions transportation more feasible. The ambitious charger goal was announced back in March 2021, with President Biden’s $2 trillion infrastructure plan earmarking $174 billion into the EV transition.

Key to the charger expansion will be tapping not only that infrastructure plan, but existing funding from the Department of Transportation, among others. A new report published today focuses on how existing DOT programs can also be used for EV chargers, and in the process help unlock part of almost $42 billion more.

Most significant is the National Highway Performance Program (NHPP), which has $23.1 billion in 2021. That can be used for construction and installation of EV charging infrastructure, including parking facilities and utilities, the DOT points out, in addition to workforce development and training in areas related to EV infrastructure, and indeed EV charging facilities for transit capital projects. Similarly, the $10.2 billion Surface Transportation Block Grant Program (STBG) and $2.4 billion Congestion Mitigation & Air Quality Improvement Program (CMAQ) can also be used in the same ways. 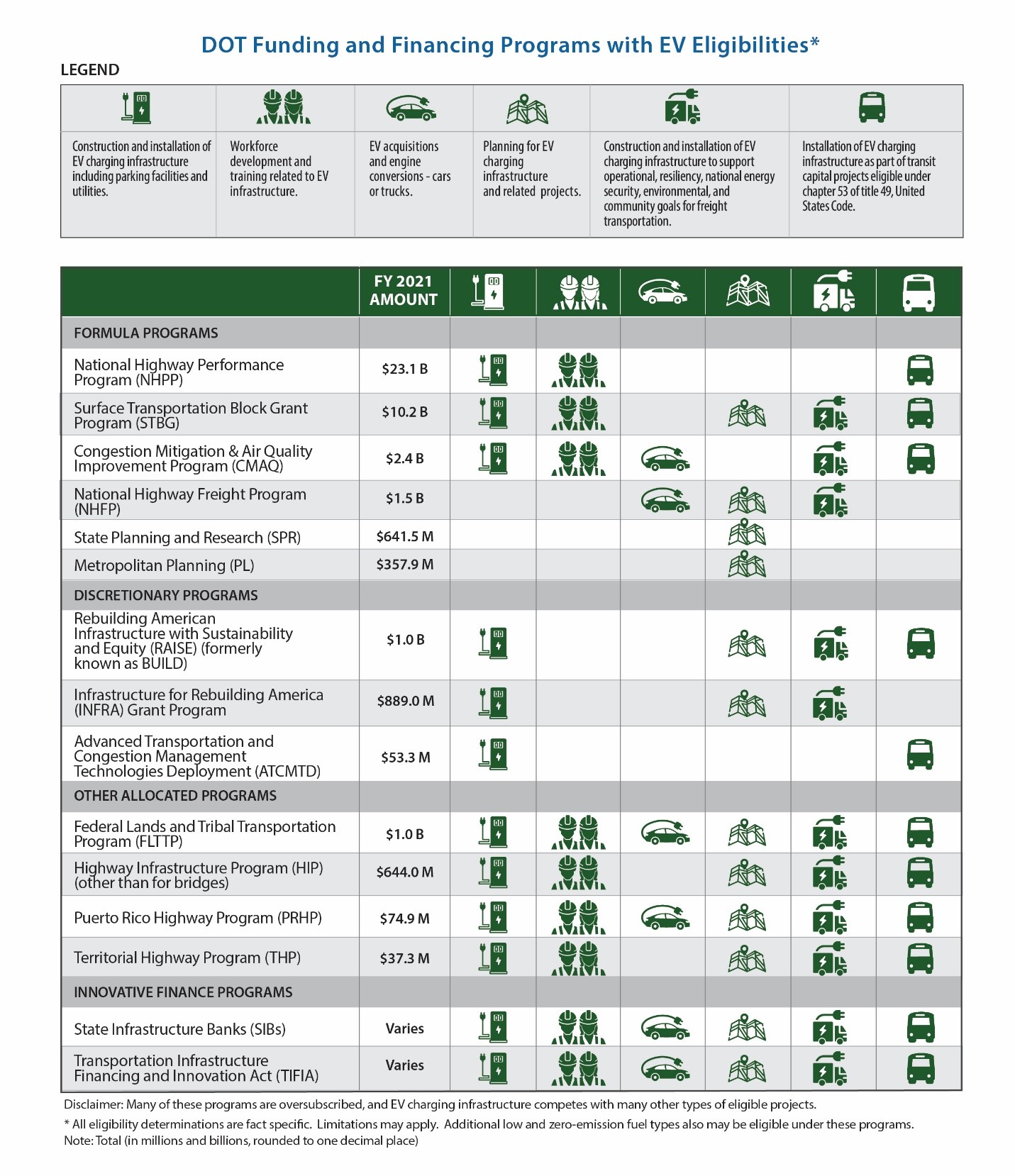 In total, the DOT says, there are fifteen programs which could help with EV infrastructure. The majority include funds which could directly be spent on EV charging facilities, in fact. However, the US government is also looking for improvements in electric vehicle charging tech.

Over at the Department of Energy, there are three new research funding opportunities. The DOE has set aside $10 million for research and development into ways to bring down the cost of DC fast chargers, on the assumption that the US will need a significantly greater amount of that hardware during the 2030 push to half a million public charging locations.

There’s also $20 million in research funding for ways to accelerate the adoption of commercially-available plug-in electric vehicles, along with community-based public-private partnerships for technologies around not only electric cars, but buses, school buses, and trucks.

Finally, $4 million has been allotted “to encourage strong partnerships and new programs to increase workplace charging regionally or nationally which will help increase the feasibility of PEV ownership for consumers in underserved communities (e.g., demographics that currently have minimal access to home charging).”

Key to the transition, of course, is supplying not only green power, but stable power. As the Texas outages demonstrated with grim effectiveness earlier this year, significant chunks of the existing grid can’t even cope with current demand for electricity, never mind a dramatic uptick in EV charging. The DOE and the Electric Power Research Institute (EPRI) plan to develop a national EV charging technical blueprint that will include not only provisions for fast charging but grid interaction too. 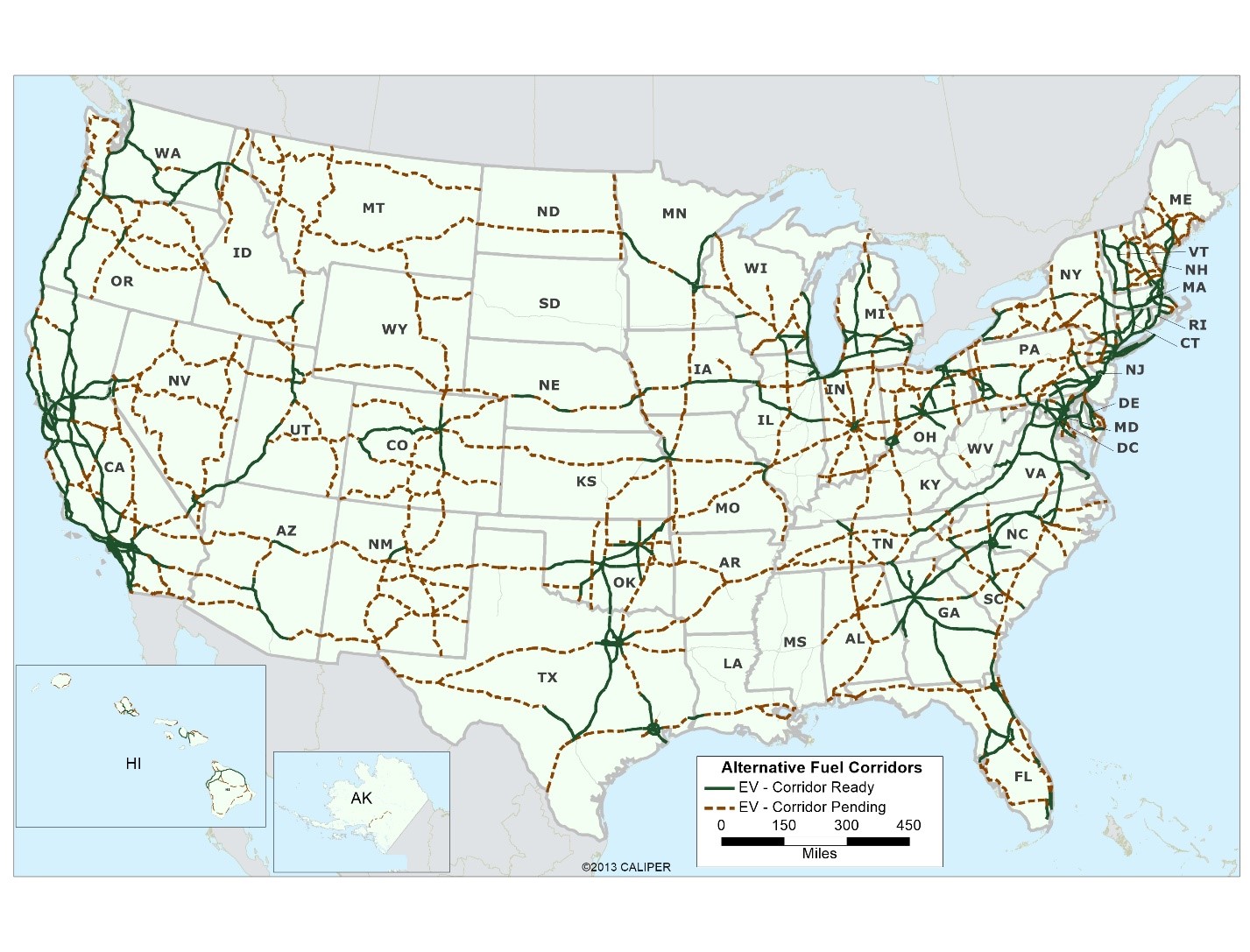 The Department of Transportation isn’t waiting for that to be completed before it pushes ahead with new chargers, however. The fifth round of “Alternative Fuel Corridors” was confirmed by the DOT today, building on four previous rounds of designated interstates, highways, and state roads that are outfitted with alternative fuel supplies, including EV chargers.