It was just a few months ago that the folks working with Jeff Bezos and Bezos Expeditions headed to the depths of the sea to bring up a new collection of NASA history. This week it’s made clear – and confirmed – what they actually found: these F-1 engines belonged to none other than NASA’s mission Apollo 11. If there’s one tribute to the greatness of that moon exploration mission that we’re guessing Neil Armstrong wouldn’t have expected, this would be it.

The 20th of July will be the 44th anniversary of the original moon landing, and here in a mission that brought us down in the other direction to the ocean’s floor, the recovery of a big batch of hardware components brings the whole missing into clear view once more. The parts recovered here have become a whole heck of a lot more important than they were without identification here in the summer of 2013.

What’s been found – amongst other identifying markings, of course – is a simple 2044 stenciled in black paint on the side of one of the thrust chambers of these F-1 engines. This discovery was part of an in-depth exploration of the hardware’s markings and identifying bits and pieces, leading to the understanding that these units are connected to history as follows:

The connections are unmistakable – but wouldn’t just be left to a simple paint marking to hold solid. Upon deeper digging, corrosion removal delivered another clear “Unit No 2044” stamped into the surface of the metal. 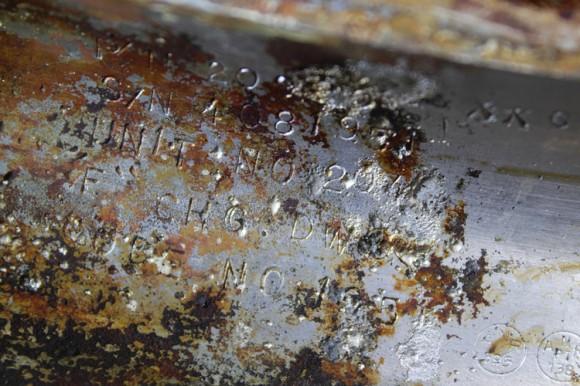 This post-sea in-depth exploration was and is continuing to be done by the conservation team at Kansas Cosmosphere and Space Center in Hutchinson, Kansas. The announcement on this confirmation – stamps and all – was made here on the 19th of July, 2013.