Bentley has announced that after six months of getting its racing SUV (yes you read that correctly) ready for the big day, the Bentayga is ready. The big Bentley SUV will be blasting its way up America’s Mountain at the Pikes Peak International Hill Climb this coming weekend. Bentley says that the six-month development program is now complete and piloting the Bentayga will be two-time champion Rhys Millen.

As always with the Pikes Peak hill climb, the track will span 12.42 miles and has 156 corners and a 4,720-foot elevation gain from the starting line. Bentley is targeting the SUV class record with the Bentayga and notes that the beast will need to maintain 60 mph on average to take that goal.

An average speed of 60 mph may not sound that fast, but the road up Pikes Peak is scary for many at 15 mph as many of the corners have minimal or no protection between the car and a fall off a cliff. Millen will be behind the wheel of a Bentayga packing a 600hp W12 engine using adaptive air suspension and 48V active anti-roll control.

Millen and his Bentayga will be racing in the production class where minimal changes are allowed to the cars. The modification includes a roll cage, fire suppression system, racing seat, and Pirelli DOT tires. Bentley removed about 300 kg of interior trim for the event per the rules.

The car uses an Akrapovic exhaust system and is covered in Radium Sating paint and uses a Styling kit from Bentley that adds a front splitter, diffuser, side skirts, and rear spoiler. Stopping should be up to par with massive carbon ceramic brakes. 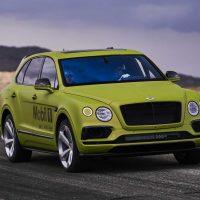 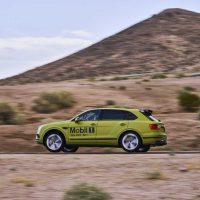 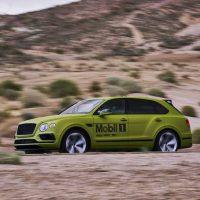