Bem Wireless may not be terribly well known in a world saturated with different speaker options and accessories, but they caught our eye when they introduced the Speaker Trio, a set of three small Bluetooth speakers that are simple and minimalistic, as well as stylish and swanky. We decided to try them out for ourselves to see just how simple these things are, and if the audio quality can match its good looks.

The entire package comes with the base, three speakers, AC power cord, and a 3.5mm audio cable — all of which costs $299. The speakers themselves are cubes that measure six inches all the way around, and the base for which they sit upon is about an inch tall and a foot-and-a-half long. These definitely don’t take up a lot of space, so if you’re looking for a set of compact speakers, these can definitely be in the running.

Setup is fairly straightforward and it involves simply just turning everything on, pairing the speaker base with your Bluetooth-enabled device, and you’re off to the races. Turning on the base will make it discoverable over Bluetooth, and then each speaker has its own power that you can toggle for each, so if you don’t happen to need all three speakers, you can just turn on one or two and use those, leaving the third one charging on the base if you want. 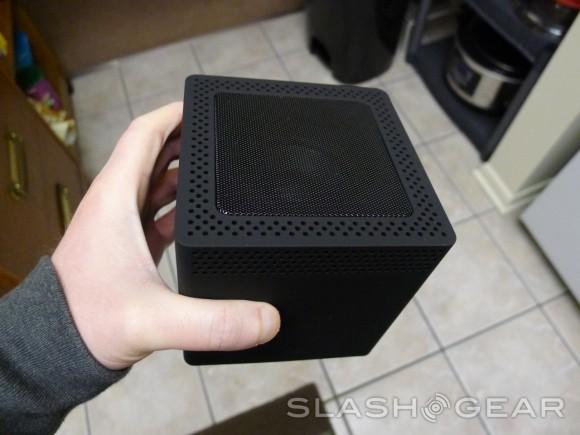 Turning on each of the speakers will reveal a soft LED glow underneath the speakers around the outer edge. This is an amazing design feature that we really dig, and it gives the system a little added personality when you’re blasting your tunes. Unfortunately, when the speakers are turned on, there’s a faint humming noise that comes from each speaker. You don’t hear it at all when you have music playing, but if you pause the music, and you’re in a quiet house, you’ll be able to hear the buzzing from a bit of distance.

The Bluetooth range is about 25 feet according to Bem, so you’ll be fine if you’re in the same room as the base, but you definitely won’t be able to have control from across the house. In my 800 square foot apartment, I was able to control it from anywhere in the living room, but once I started to make my way back to the bedroom, it started to cut out at random points. Having the base placed in the middle of the apartment definitely helped with that, but if you have a bigger living space, you’ll want to think about placement and where you’ll use it the most. On the other hand, the speakers have a huge range, with a 120-foot max distance from the base. Anywhere I set the speakers, they were all able to pick up a signal. I had one in the bedroom, kitchen, and the living room — great for doing chores all around the house without having my music fade in and out. 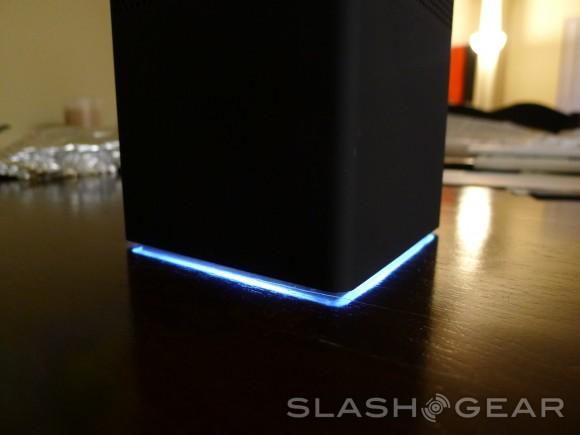 Of course, if you don’t want to use Bluetooth, you can use the included 3.5mm audio cable and plug directly into the base. This will save on your device’s battery life, as well as increase the quality of the audio a bit, since you’re going through a hard wired connection There’s also an auxiliary-out port for effectively turning another pair of speakers that you have lying around into Bluetooth speakers, although you’ll have to keep the base nearby since that’s what you’re plugging into, but it’s a great way to turn some high-powered speakers into wireless speakers with Bem’s Speaker Trio base.

As for speaker quality, the Speaker Trio won’t replace your dedicated stereo system (if you even have one). First off, the speakers aren’t that big, so you won’t get that punchy bass that we know you love. Plus the music is being sent over Bluetooth, which will degrade the quality of the audio before it even gets to the speakers. Nonetheless, the audio doesn’t sound distorted, and if you’re not a hardcore audiophile, the speakers don’t sound too bad, frankly. They certainly beat using your laptop or mobile device speakers for sure. 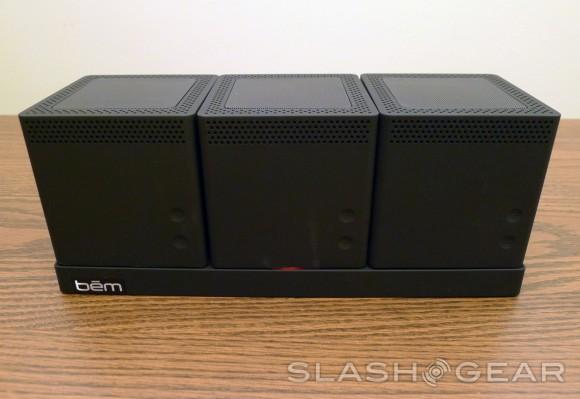 Bem claims that each speaker gets around 6 hours of battery life, which should be enough to get through an average house party, unless you party really hard, in which case you probably have a high-wattage boombox anyway. I was able to go several hours without a problem. In fact, my laptop’s battery was getting low long before the speakers started to show signs of weakness.

In the end, there are a lot of great uses for the Speaker Trio. You can place them all around your house so that your music is with you wherever you are, or you could use them if you’re wanting to watch a movie or play some games on your tablet — just keep the three speakers nearby and you’ll be immersed in surround sound (although the Speaker Trio doesn’t support actual surround sound, but rather you’ll be surrounded with sound). These speakers are versatile, and even though they may not have the punchiest bass, they’re way better sounding than any laptop or mobile device speaker. However, is the $299 price tag too much for these? That really depends on how often you’ll use them. If you plan on using them every day for most of your audio needs, then laying down three benjamins might be worth it to you, but if you only plan on maybe using them for parties or just as a convenience factor at certain times, we’re not sure if $300 can be warranted here.