Beer brewed on Mars? Budweiser wants to make it happen

Have you wondered how much it would cost to buy a bottle of beer brewed on Mars? You may ‘soon’ get to find out. Budweiser has announced plans to research what it would take to setup microgravity brewing on Mars, where it hopes to be the first company to produce a beer. There are many challenges involved with such aspirations, of course, and we shouldn’t expect to see any beer actually makes it way to the Red Planet for a long, long while.

Budweiser announced the plans yesterday at SXSW, saying it plans to be the first beer officially available on Mars. That won’t involve sending some bottles in a human spacecraft, though, at least not ones made on Earth. Rather, the company is exploring how to actually make beer on the planet, presumably for future colonies of humans that migrate into space. 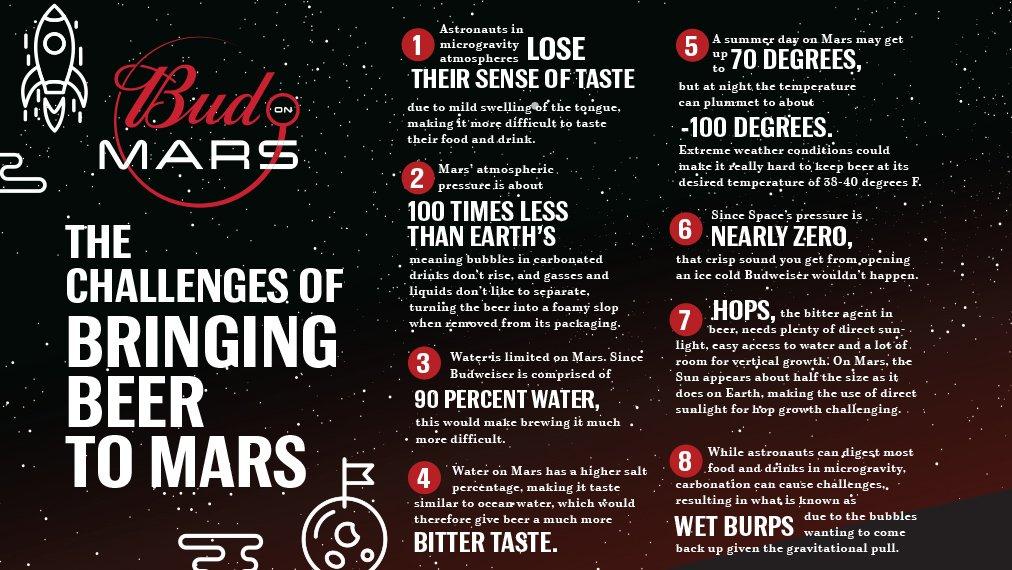 The company details all of the problems it will have to address, such as water availability and the quality of that water, getting hops on/to the planet, dealing with carbonation issues in the planet’s gravity environment, preventing Mars’ extremely cold nights from disrupting the brewing process, and more.

Of course, humans are a long way off from establishing colonies on Mars, and it is likely that any initial inhabitants will spend their lives consuming pre-packed foods, packaged nutrients, and items grown in greenhouse-like structures, namely vegetables and, perhaps, meat. It’ll likely be decades before we see any commercial companies make their way to the Red Planet, especially for something that would be as costly and unprofitable as bottled beer.