Batman sighted in Japan riding on a trike

It’s not unusual to spot costumed personalities doing stunts while shooting or doing some promotional thing. But suddenly zooming past you in the middle of a highway? Not so much. One lucky resident of Japan’s Chiba prefecture was able to snap up some shots of the Caped Crusader cruising down the highway on what looks like a very strange three-wheeled bike.

Of course this is hardly the real Batman, or rather the Batman in the upcoming film. After all, there is no retinue of cameras and whatnot to film his every move. Still, one has to give props to this rather brave and daring cosplayer who seems to have meticulously replicated the Dark Knight’s visage. Well, almost replicated, in all but one thing.

That is no Batcycle, Batpod, or whatever bike Batman has so far been seen, in films or in comics. Because what self-respecting costumed hero would want to be caught dead riding on something that looks like it has training wheels in front. Then again, the trike still gives off that militaristic and exotic vibe that makes you feel it would be something the real Batman might want to use. If he would ever use a trike, of course. 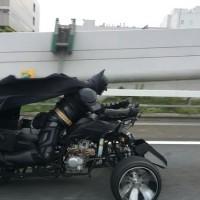 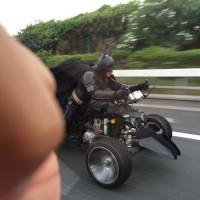 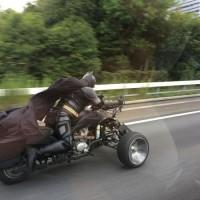 That said, it seems that some of the comments on @snsd_mumin’s Twitter post voiced some amount of disappointment at their hero possibly breaking some laws. Not to mention driving unsafely. Long billowing cape on wheels? Probably not the best design idea in real life. Hopefully our trike-toting Batguy here filed the necessary permits for this little stunt. But then again, does Batman ever file papers for anything anyway?