Multiple United States Federal government agencies have seized the classifieds website Backpage.com. Anyone who attempts to visit the website will see an alert stating that the domain and its affiliated websites have been seized. The shutdown was performed as part of an “enforcement action” that involved the US Postal Inspection Service, the FBI, and the IRS’s Criminal Investigation Division. The Joint Regional Intelligence Center provided analytical assistance.

The US Department of Justice has confirmed that the website’s notice is authentic. The notice appeared this evening, though information about the enforcement action is still incoming. Attempting to visit the website at the moment doesn’t show the notice, but instead presents visitors with a “504 Gateway Timeout” error. The notice states that the Justice Department planned to provide more information at 6PM EST today, but no formal press release or statements have been published. 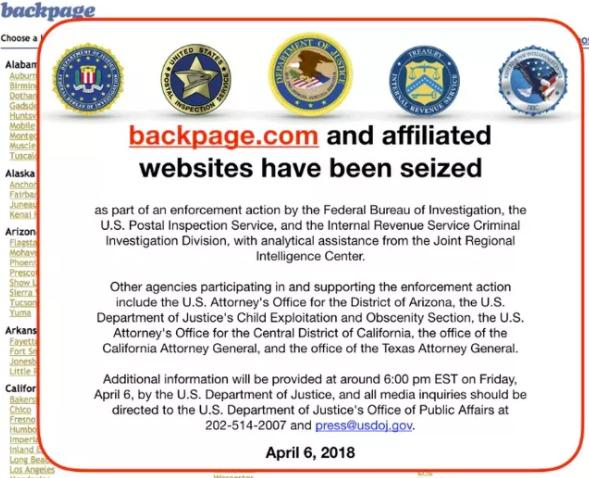 Backpage has long been a controversial classified advertising website, previously accused of facilitating child sex trafficking, among other things. Last year, the website blamed years of pressure from the US government as the reason it shut down its adult ads category. Among the accusations is that Backpage had hidden criminal activity by selectively removing certain keywords that otherwise could have revealed child traffickers, according to WaPo.

In 2016, Backpage’s CEO Carl Ferrer was arrested in Houston on pimping charges, states NPR; they were later dismissed. Though the site faced heavy pressure from advocacy groups, among others, many defended it under free speech claims. According to CNBC, an FBI official in Phoenix stated that “law enforcement activity” had taken place at the home of one of Backpage’s founders, Michael Lacey.

Talking about the matter is Bradley Myles, CEO of the group behind the National Human Trafficking Hotline, who stated to Reuters that Backpage’s seizure will have a significant impact on the sex trafficking marketplace. In a statement, Myles said, “Shutting down the largest online US marketplace for sex trafficking will dramatically reduce the profitability of forcing people into the commercial sex trade, at least in the short term.”

Underscoring its alleged role in trafficking, the National Center for Missing and Exploited Children states that about 75% of the cases it receives are related to advertisements that were posted on Backpage.com.