This week AT&T started sending out emails about how users will need a new smartphone if they want to continue “receiving service.” AT&T’s message does not suggest that users will lose service instantly – but they DO suggest that some users will NEED to upgrade to a new phone if they plan on continuing to get phone calls by the time the countdown is done.

An update email from AT&T suggested that they’re upgrading their network “to use the latest technologies.” AT&T continues, saying “these updates are to serve you better and bring faster speeds and greater reliability.”

If you’re the sort of person who generally refuses to upgrade to a new phone unless your old phone is completely non-functional, you might not be happy with this news. The good news is that there is a bit of time before your phone will stop working with AT&T’s network.

In the message from AT&T, an AT&T representative linked to an AT&T support page which detailed the phasing out of AT&T’s 3G network by 2022. According to AT&T, you’ll need a new phone by February of the year 2022.*

*This does not include every single AT&T user. It only includes “3G devices and 4G wireless devices that don’t support HD Voice.” If you own an iPhone that’s older than the iPhone 6, you’ll need a new device. AT&T included a long list of phones that work on their network as of March 20, 2020, from Apple, LG, Samsung, Alcatel, BlackBerry, Cricket, Essential, Google, Microsoft, Motorola, Kyocera, Huawei, Nokia, OnePlus Punkt, RED, Sonim, ZTE, and HTC. 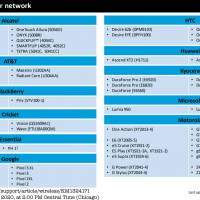 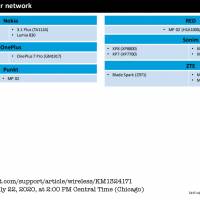 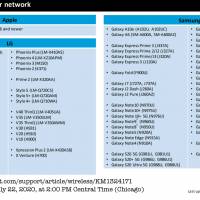 Above you’ll see three screengrabs from the PDF issued by AT&T in the linked support page above. In this document it would APPEAR that we’ve got the majority of (if not all of) the smartphones that’ll work on AT&T’s network for the foreseeable future. If you have a phone that’s older than what’s listed here, you may need to upgrade.

If you need a new phone

AT&T attempted to pad the situation with a note about how they’re willing to “help” you get a new phone. “Our team is here to find a compatible device that fits your needs,” said the message from AT&T. “We want to help you transition as seamlessly as possible and ensure your service is not interrupted.”

It is POSSIBLE your phone will continue to work until the last day of AT&T’s proposed phasing out of 3G by 2022. That’s a while from the moment this article was first posted – but that date may sneak up on you, too.

You can speak with AT&T about your disappointment with the situation if you wish, but this is not the sort of situation that can be rectified with some sort of smartphone software tweak. If your phone is too old, it will be literally unable to connect to AT&T’s services after they’ve disconnected 3G.

You could always find a way to convince an AT&T representative that it’s their job to convince YOU to stay with them once 2022 comes along and you’d otherwise need to upgrade to a new phone. Never forget: You are paying THEM money for a service they’re doing for YOU.