Nobody likes finding they’ve got no signal on their phone, especially if it’s an emergency, so AT&T is pushing ahead with testing drones as temporary LTE towers. The carrier successfully completed its first trial flights last week, dispatching a number of drones on short flights in a network dead-spot in the US. Each was equipped with the necessary hardware to create its own little bubble of coverage.

AT&T calls the drones COWS, or Cell-on-Wings. Eventually, the carrier hopes to give them sufficient power to cover up to 40 square miles with LTE service. That, AT&T drone program director Art Pregler told ZDNet, would be the equivalent of around 100 football fields.

We’re still some way off from that stage, however. The trial runs, completed over the course of two days last week outside of Atlanta, only reached a maximum of 100 feet. Maximum flying time was 10-15 minutes at most.

However, it was enough to suggest that the project has real potential. AT&T took one of its Cell on Light Truck (COLT) temporary base stations out to the flying location for a baseline, then flew the drones up and shut off the COLT. Coverage automatically switched over to the COWS. 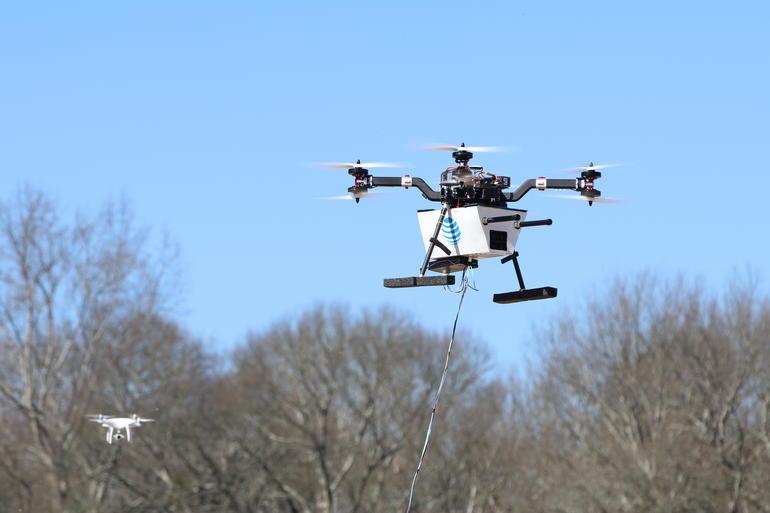 “Even with our test up to just 100 feet, we flew it at various altitudes, and you could see the coverage area expanding,” Pregler said of the trial. AT&T plans to continue its testing next month, though it’s some time before they’ll be ready for public deployment. That’s not just down to the technology, but regulations as well.

Because of the Federal Aviation Authority (FAA) rules on drones, AT&T’s COWS will only be able to fly as high as 400 feet. Potentially more frustrating for the carrier, a human pilot needs to be on-hand to take over the controls in the case of an emergency. The rules also mandate flying only in daylight hours, though AT&T says it expects to get a pass on that: its drones are tethered in place.

Even with the limits, there’s big potential for the technology. AT&T isn’t expecting to use it to fill in permanent gaps in coverage – a regular cell tower is still far more efficient for that – but the COWS could be a game-changer in emergencies when network load is suddenly dramatically higher, or during events like concerts. That won’t be happening any time soon, though AT&T’s drone test chief did suggest that private network trials could start as early as later in 2017.