Phone launch leaks a-plenty this weekend, as the Boy Genius Report scoops up a couple of interesting screenshots from Best Buy and AT&T.  According to the retailer, whose plans for August 23rd have been snapped below, in a couple of weeks time buyers will have the choice of several anticipated devices, including the T-Mobile Samsung Gravity 2 and the Verizon Omnia 2 and LG Chocolate Touch.

Other devices include a new shipment of BlackBerry Tour devices for Sprint, together with the Samsung u450 Intensity and Samsung Rogue for Verizon.  There’s also the Samsung Solstice and LG Xenon for AT&T, a new data-card for Verizon and – on September 8th – a Samsung M330 for Sprint.

As for AT&T, no dates but just the assurance that the many devices listed below are “coming soon”.  That includes such tidbits as the Garmin nuvifone G60, HTC’s Tilt 2 (aka the HTC Touch Pro2) plus a version without the integrated camera for enterprise users, the BlackBerry 9700 in charcoal and the HTC Pure (believed to be the HTC Snap). 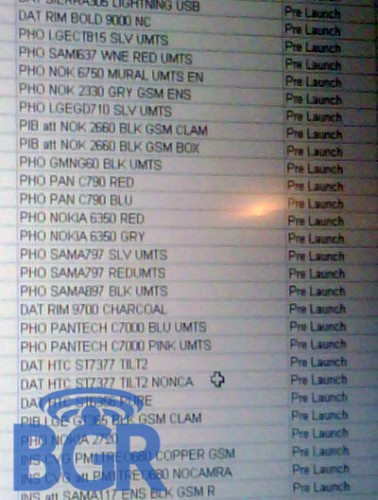