AT&T is launching a new 5G mobile hotspot, promising higher-speed data for your laptop, tablet, Nintendo Switch or whatever else while on the move. The Netgear Nighthawk 5G Mobile Hotspot Pro will be compatible with both AT&T’s sub-6 GHz 5G and the faster millimeter wave service it brands “5G+” in a number of locations.

Obviously, 5G+ is what you want if maximum speeds are your priority. Problem is, like with other carriers rolling out mmWave service, it’s a time-consuming and expensive prospect. AT&T currently has “parts of 35 cities” with 5G+ service, but if you’re outside of those areas then you’ll be getting standard 5G instead, or even just 4G LTE.

AT&T’s 5G, as recent speed tests have shown, isn’t going to necessarily blow you away. In fact, expecting something along the lines of 4G LTE on a good day is probably in order. Nonetheless, that’s more than sufficient for dealing with a cable internet outage at home, or indeed getting several devices connected while you’re on the move. 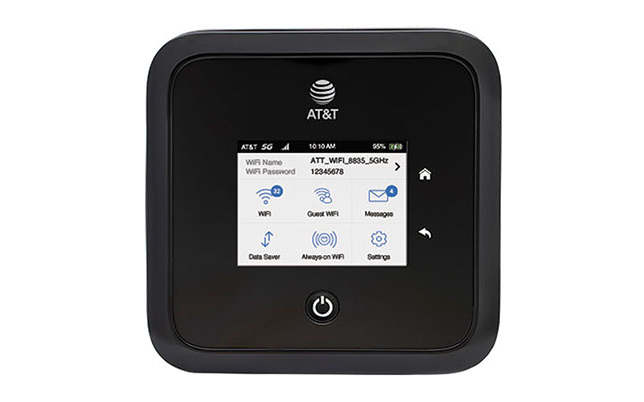 The Nighthawk mobile hotspot uses Qualcomm’s Snapdragon X55 modem, with support for WiFi 6 for client devices. Up to 32 of those can be actively connected at any one time – though obviously they all have to share the same LTE/5G/5G+ data connection – with a 5,040 mAh battery to keep it running while mobile. Or, you can power it directly from the included power supply.

Mobile hotspots aren’t generally known for their aesthetics, and we can’t exactly say that Netgear’s is going to overturn those preconceptions. However the touchscreen on the top panel should make it easier to control, showing things like WiFi SSID, the WiFi password, battery and signal strength, and what flavor of 5G you might be getting. There’s also guest WiFi network support, to create a second network for temporary use, and the ability to see what devices are connected at any one time, directly from the Nighthawk hotspot itself.

It’ll also be FirstNet Ready, which will allow first-responders the priority LTE access – including Band 14 spectrum – that AT&T has set aside.

Sales kick off on September 18, with the hotspot priced at $509.99; alternatively, you’ll be able to get it for $17/mo for 30 months on an AT&T installment plan. Data service will be required of course, too.