Like it or not, there will eventually come a time when you will have to plug in that smartphone to a power outlet. And when that time comes, the name of the game isn’t just battery size, it is charging time. Advancements in technology today has brought as the likes of Qualcomm’s Quick Charge and similar features. But which smartphones really have the fastest and most efficient charging time all in all? As you might have already guessed from the title, it is probably not something you expected.

It seems that this is yet another title to pin on ASUS‘ surprising flagship. In addition to the impressive performance and unbeatable price, not it turns out that it may have the quickest charge time as well. Tom’s Hardware did the test among six of the most high profile smartphones this year, which includes, aside from the ZenFone 2, the Samsung Galaxy S6, the LG G4, the Nexus 6, the DROID Turbo, the OnePlus 2, and, of course the iPhone 6. Measurement all started at 5 percent charge left and was recorded at 5, 15, and 30 minute marks, and then a race to the 100 percent finish line.

In counting per minute, the ASUS ZenFone 2 blazed the trail, gaining 17 percent of full battery capacity in only 5 minutes, 32 percent at 15 minutes, and 53 percent at 30 minutes. Of the six, the Galaxy S6 comes second in almost all tests except when it came to the last leg of the race. In charging from 5 to 80 percent, Samsung’s flagship was actually quicker, filling up in only 48 minutes while it took the ZenFone 2 56 minutes. To reach full charge, though, the Galaxy S6 only took 1 hour and 22 minutes while, surprisingly, finished in the middle of the pack with 1 hour and 49 minutes. 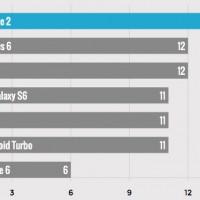 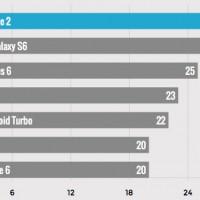 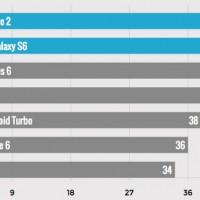 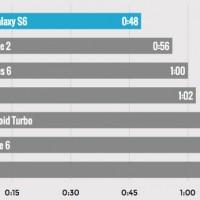 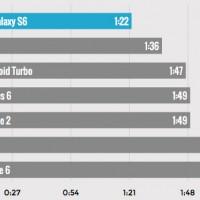 These figures are partly due to the way smartphones charge their batteries, which switch to a trickle past 75 or 80 percent charge, and partly due to the fast charging technology used. While Qualcomm’s Quick Charge is probably the most known, it is not the only one and clearly not exactly the best. Of the six, the OnePlus 2 and the LG G4 are really the only ones that nominally use Qualcomm’s tech. The Nexus 6 does as well but is marketed as Motorola’s Turbo Charge feature. The Galaxy S6 runs on an Exynos chip and has its own fast charging tech. The ZenFone 2 uses an Intel chip but has ASUS’ own “Boostmaster” feature. Unsurprisingly, the Apple iPhone 6, which uses none of those chips and no fast charging capability, performed the slowest on average.

One thing to note about the race between the Galaxy S6 and the ZenFone 2 is the size of their batteries. Samsung’s flagship only has a 2,550 mAh piece. This means it is able to reach full capacity sooner than the 3,000 mAh on the ZenFone 2, which keeps ASUS’ smartphone in an overall more favorable position.