There’s now a couple of Transformer Prime units out there in the world, the original which we’ve already had the pleasure of reviewing, and the 700 series, one with an improved resolution display and a boosted front-facing camera – not to mention a slight design differentiation on the back of the display. What you’ve got here is a slightly more expensive $599 and $699 for the boost in specs and updated hardware on the whole. Have a peek at what this device is capable of with our hands-on look at it as well as Shadowgun THD developers preview version for Tegra 3.

This device runs Android 4.0 Ice Cream Sandwich right out of the box and totes the fabulous NVIDIA Tegra 3 quad-core processor. Have a peek at our full review of the Transformer Prime to see what this device packs aside from the panel, it also an IPS display meaning its so bright that it’ll bust your eyeballs out. The best example we’ve got of this happening is Shadowgun running here at native resolution, that being WUXGA Full HD 1920 x 1200 – powerful!

NOTE here that the device is likely simply going to be marketed as the Transformer 700 Series instead of the TF700 or TF700T you’ve heard of in the past.

Additional features that we dont go too far into in the hands-on video are SuperNote app – this allowing you to take screenshots and insert photos, videos, and audio recordings along with maps and more to take all the inclusive notes you could ever want. The camera on the back is still that powerful 8 megapixel shooter with LED flash, back-illuminated CMOS sensor, and F/2.4 aperture. Audio is provided by ASUS SonicMaster technology too – it’s no less than deliciously soundtastic. 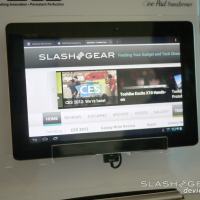 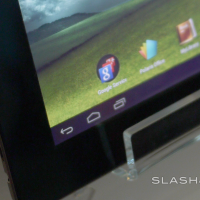 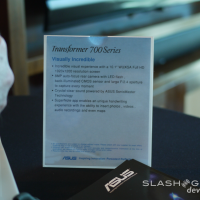 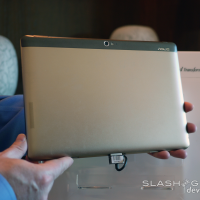 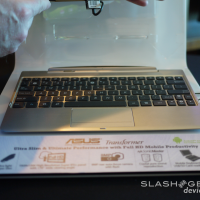 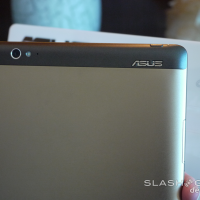