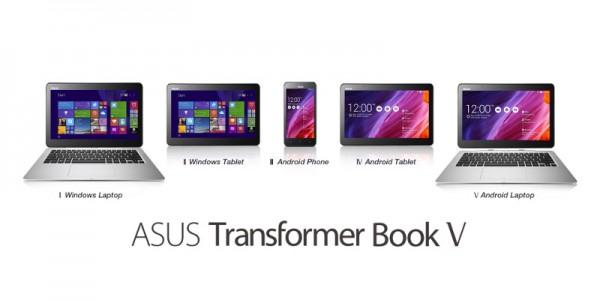 In terms of hardware, the Transformer Book V is also a mixed bag. On the Android smartphone side, you have a 5-inch display and an unspecified quad-core Intel Atom processor. In a way, this is notable as it is claimed to be the first 5-inch LTE device powered by Intel’s chip. It has 2 GB of RAM, up to 64 GB of storage, an 8 megapixel rear camera and a 2 megapixel front shooter. On the tablet side you will get a 12.5-inch screen an Intel Core processor, again unspecified, capable of supporting up to 4 GB of RAM. Storage space is quite abundant up to 1 TB. The most disappointing spec of this hybrid is the display, which is noted to only be HD for both parts. For the smartphone, that might not be much of an issue. But for the large screen of the tablet, that will most likely hurt.

Though less flamboyant, the Transformer Book T300 Chi is also notable, if just for the small footprint that it barely leaves. This device is a more conventional 2-in-1 Windows 8.1 hybrid, offering users the utility of a laptop and the fanciness of a tablet. Though it also has a 12.5-inch screen, the resolution this time is thankfully a large 2560×1440 WQHD one. The processor is again an unnamed Next Gen Intel Core, with configuration choices of 2 or 4 GB of RAM. 4G LTE network connection is also supported. The tablet, when undocked and by itself, measures only 7.3 mm thick, making it the thinnest Intel Core tablet in the market, or so ASUS claims.

At the moment, pricing and availability details have been omitted and, going by ASUS’ past behavior, it could take a random amount of time before these devices arrive on market shelves. The ASUS Transformer Book V might also be something to keep an eye on, as these dual-boot devices seem to mysteriously disappear without warning, with rumors of Microsoft or Google, or both, silently blocking such contraptions from ever coming to light.