The ASUS Transformer Book T100 features an Intel Atom Bay Trail TZ3740 quad-core processor with 2GB of RAM and both 32GB and 64GB storage options, as well as a microSD card slot for storage — graphics come via Intel HD Graphics, the specific variety not being specified. The display is a 10.1-inch IPS display with a resolution of 1,366 x 768 pixels, putting it on the higher end of the tablet spectrum.

There is a 1.2-megapixel camera on the front of the slate, and the battery is rated as 31Whrs, which ASUS says provides 11 hours of use time. As you can see in the image, the Transformer Book T100 is a hybrid tablet set up that includes a docking keyboard, something that offers USB 3.0 connectivity and multi-touch via its touch pad. 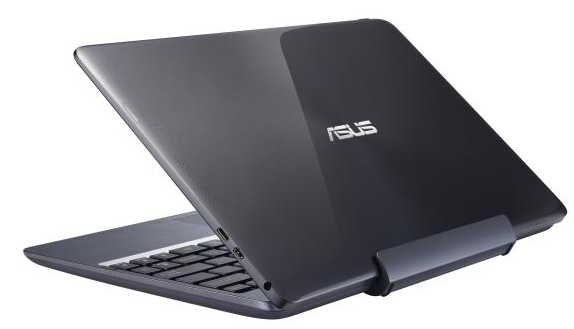 The tablet weighs 550 grams, while the dock weighs 520 grams, making for a full unit weight of approximately 2.4-pounds when combined. The tablet itself is fairly thin, with the measurements coming in at 263 x 171 x 10.5mm, while the dock measures in the same with a slightly higher thickness at 13mm.

Overall, the Transformer Book T100 has solid specifications, and the design certainly is familiar for those who have used some of ASUS’s other Transformer products. Those interested won’t have too wait long to check it out, with ASUS planing to launch the tablet on October 18 for $349 USD for the 32GB, and $399 USD for the 64GB model.