Asus has announced a new motherboard that gamers and computer enthusiast’s building up a high-end PC will certainly lust over. The new motherboard is called the Asus P9X79-E WS and has support for up to four-way Nvidia GeForce SLI or AMD CrossFireX using x16 links. The board also supports Asus Dr. Power to help prevent sudden shutdowns using power supply health monitoring and event notifications.

Asus says that the board is 91% power efficient and has enhanced heat removal and connectivity for high-speed storage and data transfer with dual server-grade Intel Ethernet ports. The big feature for computer gamers and enthusiasts looking for all of the graphics performance they can get is the support for up to four video cards from Nvidia or AMD. The mainboard also supports seven single slot graphics cards. 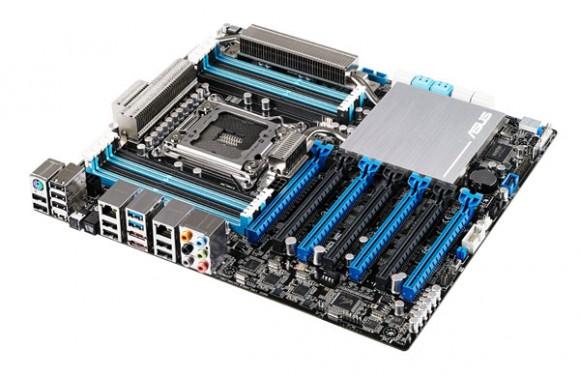 With seven available PCI Express slots this motherboard will also be appealing for users who want to build the machine for PCI Express-based video capturing or with numerous SSD storage devices that use PCI Express slots. The motherboard uses the Intel i210 controller for the dual Intel Ethernet ports. The controller allows for twice the bandwidth with lower latency and less packet loss.

The board is made using a durable 10-layer PCB with 100% ultra-long life solid-state capacitors. The board is also fitted with Asus DIGI+ VRM digital voltage controls for the processor and memory. The board uses a fan-less cooling design featuring copper heat pipes to extend hardware longevity and improved stability without adding any noise. The board also features four USB 3.0 ports, six SATA 6Gbit/s ports and a pair of front panel eSATA ports. The board will launch in late April or early May at an undisclosed price.