ASUS has outed their latest Republic of Gamers motherboard, and unlike many of its predecessors the Rampage III GENE packs its punch into a much smaller area.  A microATX board, the new ROG Rampage III GENE supports up to hexacore Intel Core i7-980X processors thanks to its X58 chipset, as well as USB 3.0 and SATA 6Gb/s.

As with other ROG boards, ASUS has slotted in their own auto-overclocking technology in the shape of CPU Level Up, and there’s automatic game-priority for the ethernet connection too.  No word on pricing or specific availability yet. 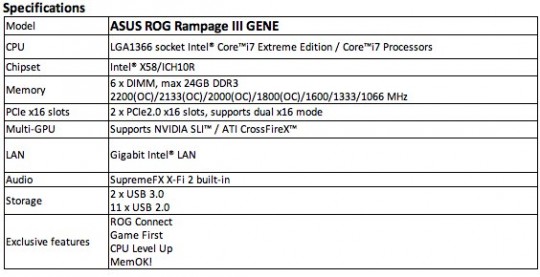 PC performance devotees have come to know and trust the Republic of Gamers GENE series, a lineup of microATX boards. The new Rampage III GENE takes after the successful Rampage II GENE, bringing the same insistence on hardcore performance to the space and energy saving microATX form. It’s a perfect option for case modders, LAN party attendees and PC gamers looking for a compact build.

Unique ROG Advantages
Rampage III GENE, or R3G, carries over the great features that have made Rampage III Extreme a best seller. It has the Intel X58 chipset, supporting six core Intel i7-980X processors, as well as updated USB 3.0 and SATA 6Gb/s for the fastest data transmission available to consumers.

But it’s the Republic of Gamers (ROG) tradition that sets this board apart from other microATX contenders. It shares in the same spirit of no holds barred performance, driven by ample overclocking. And naturally the trademark ROG design shines through here. For PC tweaking aficionados and new entrants alike, Rampage III GENE delivers numerous avenues to max their PC’s capabilities. ROG Connect brings remote overclocking via USB cable from an external compatible device on a pure hardware level, so benchmarking can occur in a more native environment and results are truer to form.

ProbeIt furnishes accurate diagnostics and voltage readings in real time from different parts of the board, so tuners can keep a close eye on the effects overclocking efforts have on hardware. This is part of the ROG commitment to the joys of PC modding and gaming, pursuits the design team holds dear and never neglects to address with every new product.

Likewise, the new board boosts connectivity to eliminate online barriers in this era of cloud services and multiplayer-focused gaming. True Intel Gigabit LAN offers fully accelerated connections whenever possible to guarantee higher performance, and drastically reduced CPU utilization. GameFirst is another internet-related feature, giving users a powerful tool for prioritizing connections so that downloading and other tasks can occur in the background without restricting online gaming performance.

Compact but Versatile
When creating the new Rampage III GENE, the ROG team stayed true to the GENE squad promise of gaming motherboards that deliver many things to a wide range of PC enthusiasts. Those interested in overclocking can get better performance with ROG Connect, while case modders will appreciate the tremendous power packed onto the small size. And of course, all gamers, and especially those attending LAN parties, are bound to enjoy the spectacular audio and online abilities of the R3G. Its attractive balance of great features and smart space utilization is slated to become a hit, as were all previous GENE boards.