NASA details the three phases in reaching Mars with human astronauts, including Earth Reliant, Proving Ground, and Earth Independent. The first of these, Earth Reliant, requires that we make certain we’re capable of existing outside of our own atmosphere for long periods of time. This includes astronaut missions aboard the International Space Station. Part of NASA’s plan requires that we extend ISS operations until at least the year 2024. NASA also suggests that they’ll need to pursue an evolvable SLS via Exploration Upper Stage before advanced solid rocket boosters if they’re ever to make a craft that’ll bring humans to Mars AND be able to bring them back to Earth.

Inside the current “decisions made and implementation underway” category for NASA’s humans on mars initiative is the selection of an ARM baseline mission to return an asteroidal boulder to lunar orbit (around our Moon) for subsequent crew rendezvous. A number of missions will take hold of NASA’s requirement to pre-deploy cargo and infrastructure to Mars as well.

Inside the Proving Ground phase, NASA will study how they’ll be able to conduct complex operations in deep space, returning after just a few days. This phase for Mars exploration is between 1-12 months.

The final phase is Earth Independent. This phase has missions lasting 2-3 years (on Mars) and return will take months at a time. This is the phase the folks in the movie The Martian were in – though we won’t likely see astronauts left behind in dust storms in this case. 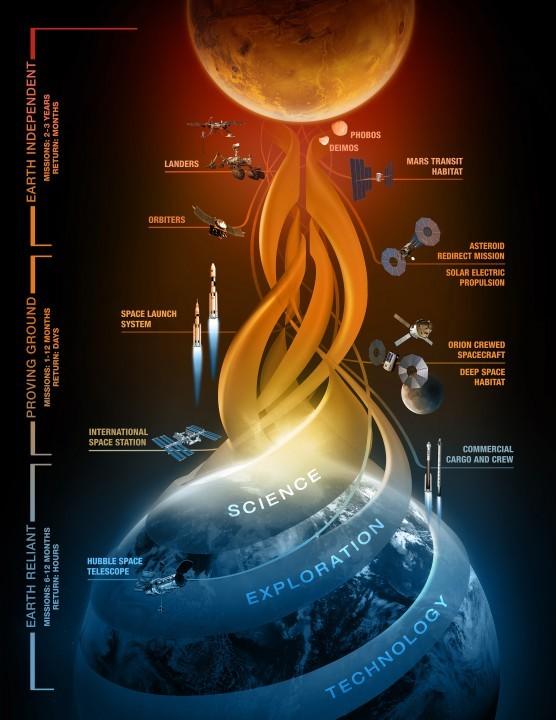 Above you’ll see NASA’s journey to mars outline in visual form. Tap the image to see a full-sized version. We’ll see more details from NASA on their mission to Mars over the next several months and subsequent years.

Stick close to our Mars tag portal for more as NASA reveals all the goodies.