It looks like placing the Assassin’s Creed series in an entirely different setting has worked wonders for the series, as Assassin’s Creed III has officially sold over 7 million copies. This milestone comes just over a month after the game launched for Xbox 360 and PS3, which is pretty impressive for any game that doesn’t have “Call of Duty” in the title. Perhaps unsurprisingly, this makes Assassin’s Creed III Ubisoft‘s fastest selling game ever.

Of course, what’s a milestone announcement like this if Ubisoft isn’t going to share insane gameplay statistics? The publisher did just that in an infographic posted to its Facebook page. The infographic tells us that players have spent over 82 centuries in single player mode, while multiplayer mode is a little less popular with only five centuries’ worth of time played.

Those who have been spending their time playing single player mode have collectively racked up more than 3 billion assassinations while playing, so it looks like we’ve got an adept group of killers on our hands. Jumping over to multiplayer, we have 250 million assassinations, with 1.2 million deathmatch sessions played and 22 million knives thrown. That isn’t bad for the latest game in what some considered to be a tired franchise.

Indeed, Assassin’s Creed III seems to have revitalized the franchise. Before it was revealed, some gamers were saying that they had grown bored of the Assassin’s Creed series, but once Ubisoft showed off ACIII for the first time, those complaints went away. Are you one of the many players contributing to these ridiculous statistics? 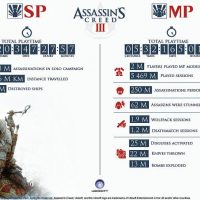