Arm has revealed its next-generation smartphone chips, and the new Cortex-A78, Mali-G78, and Ethos-N78 promise a whole new turn of speed and efficiency for 2021’s flagships. At the same time, Arm is also throwing open its new Cortex-X Custom (CXC) program, which will cook up custom chip designs for those companies which need something special from their silicon.

Performance and efficiency are Arm’s big promises for the new Cortex-A78. It’s expected to offer 20-percent more sustained performance – at the same thermal envelope – as the old Cortex-A77, trimming things like throttling. 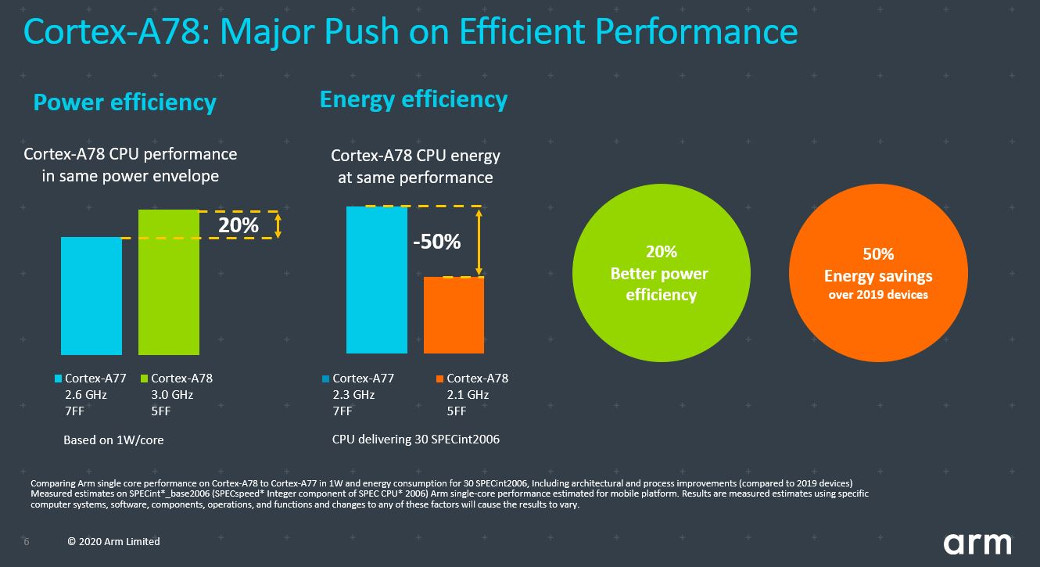 However it can also deliver 50-percent energy savings, Arm says, when delivering the same level of performance as that Cortex-A77. When running machine learning tasks, it uses 8-percent less power on average. That’ll be particularly useful, Arm points out, when more devices are on 5G and thus consuming more power for their wireless radios.

It’ll also pay dividends in new device form-factors, such as foldable. “The improvements in sustainable performance are ideal for the increasing compute demands of these new smartphone device designs where SoC space could be limited,” Arm suggests. “This is supported by the enhanced area efficiency of the Cortex-A78 DynamIQ cluster compared to the previous generation.”

Designed to be paired with the Cortex-A78, the new Mali-G78 GPU sticks with the Valhall architecture of last year’s Mali-G77 but promises a 25-percent increase in graphics performance. There’s support for up to 24 cores. Arm is also going to offer a new Mali-G68, which will have most of the G78 features but up to 6 cores instead, for more cost-effective devices. 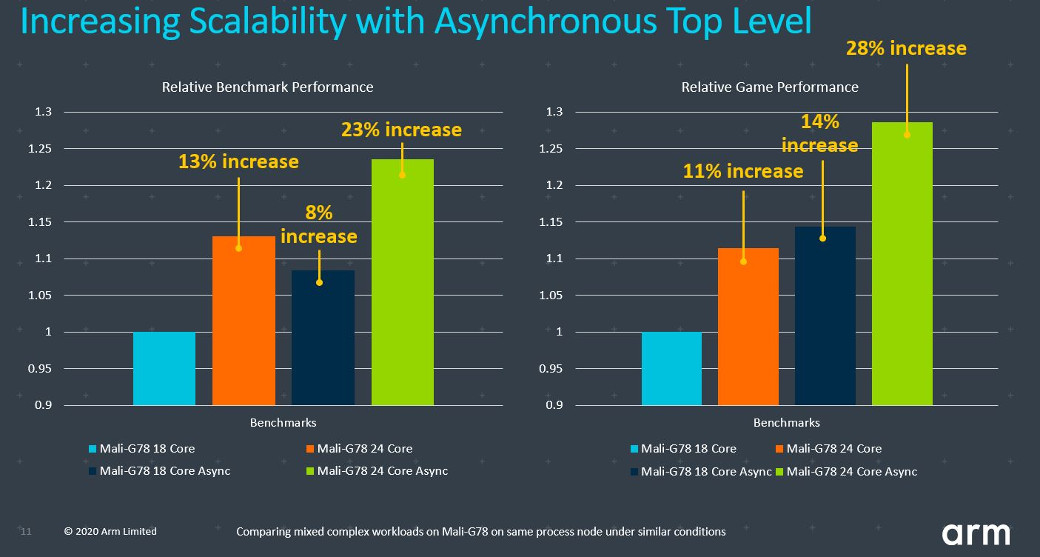 As we’ve seen from GPUs in recent years, taking on machine learning tasks will be a primary focus of the Mali-G78. There’s also a 15-percent performance density improvement for gaming content, versus last year’s GPU, along with Asynchronous Top Level support that makes sure all of the cores are working at their top speed.

Complex rendered scenes in games – like smoke, grass, and trees – will take advantage of fragment dependency tracking. On different frames, Arm suggests, you could see up to a 17-percent improvement compared to Mali-G77 devices. Arm is working with Crytek so that the Cryengine game engine works with Vulkan on Mali GPUs.

Over recent years, we’ve seen chip-makers use Arm’s IP but develop their own custom CPU and GPU offerings. That’s been relatively expensive, however, locking out smaller companies. Now, Arm has an answer.

The Cortex-X Custom (CXC) program will allow customers to decide their own performance points, different from an off-the-shelf CPU. To illustrate that, Arm has revealed the Cortex-X1, the first custom design with 30-percent more peak performance over the Cortex-A77. It also delivers twice the ML performance of a Cortex-A77 or A78. 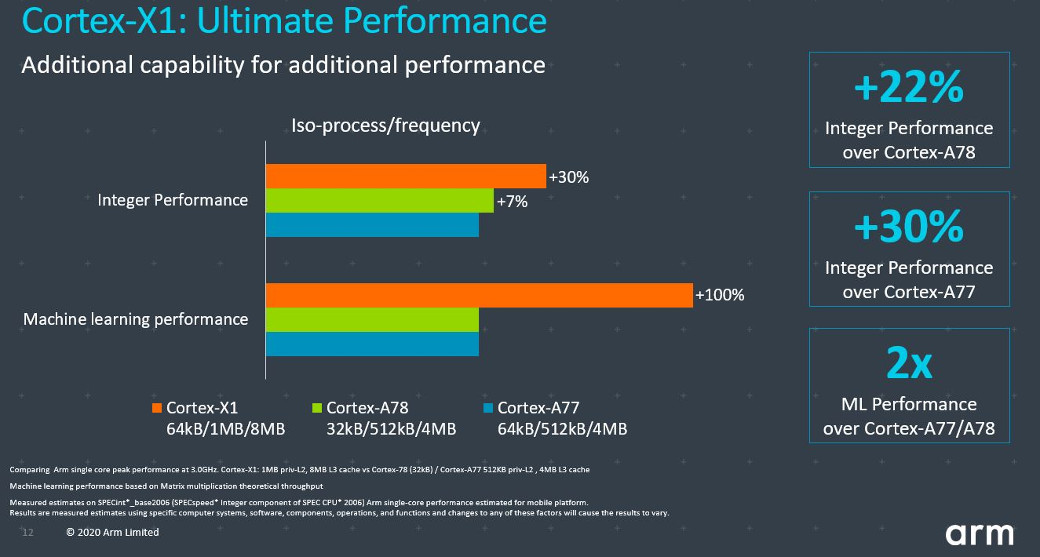 One implementation possibility is swapping out a single A78 core from a DynamIQ Cluster for a Cortex-X1. That would result in a bigger chipset overall – 15-percent larger in area – but 30-percent more peak performance. It can have up to 1MB of L2 cache and up to 8MB of L3 cache – double what the new Cortex-A78 supports.

This won’t be a chipset for everyone: it’s larger, more power-hungry, and more expensive. However for devices which need maximum performance, whether for driving sizable displays or something else, it could well fit the bill.

Arm’s third chip of the day is the Ethos-N78, its new Neural Processing Unit. That’s designed to augment machine learning tasks on the CPU and GPU, though it’s also intended for devices outside of smartphones, such as smart camera which can do scene detection and more. 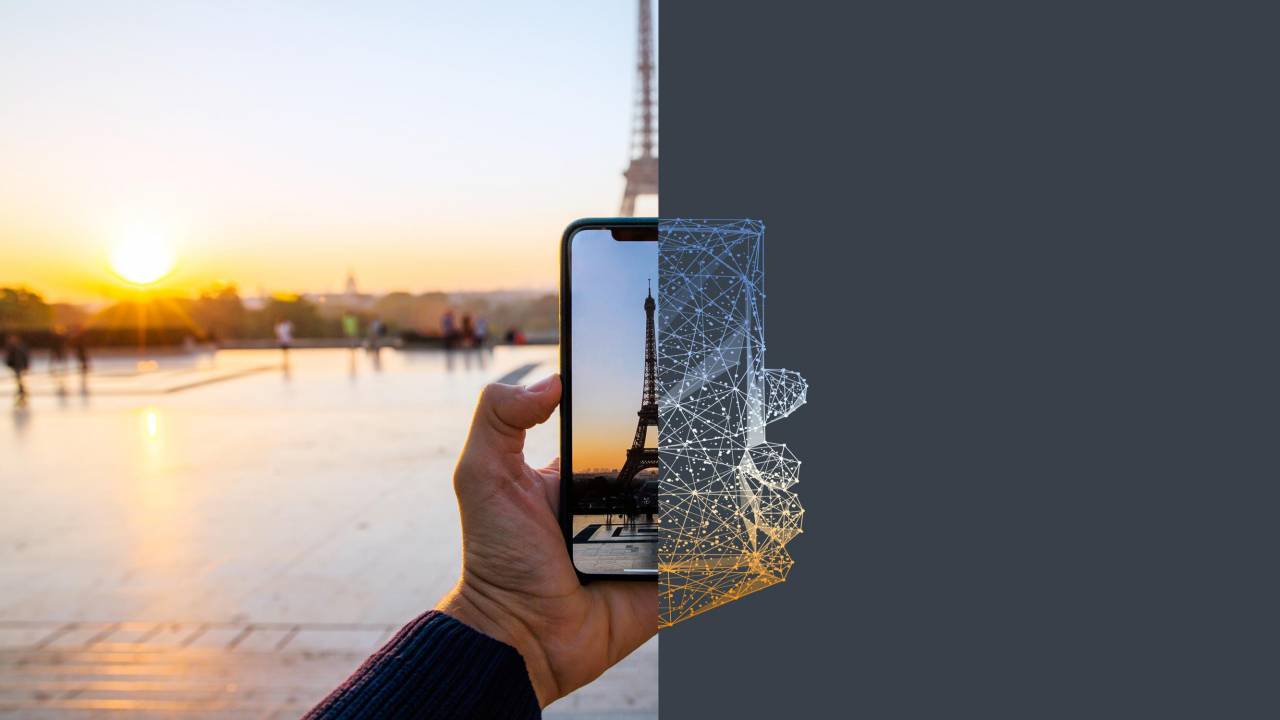 There’ll be 1 TOP/s through to 10 TOP/s options, with over 90 different configurations of things like MACs, SRAM size, and vector capability. Device-makers will therefore be able to balance the ML processing they offer with the price they’re willing to spend on a dedicated NPU. Compared to the old chip, the Ethos-N87 promises 30-percent more area efficiency, and 40-percent less DRAM data consumption per inference.

Peak performance is doubled versus the Ethos-N77, while the new NPU is more than 25-percent more efficient. For developers, there’ll be support for frameworks like TensorFlow, TensorFlow Lite, PyTorch, and ONNX, among others.

Where will you see these 2021 Arm chips?

Arm may not be a household name, but its chip architecture certainly is found everywhere. Apple uses some of the IP for its A-Series chipsets in the iPhone and iPad; it’s also expected to do so in the much-rumored Arm-based MacBook. Qualcomm’s Snapdragon CPUs rely on Arm architecture too, again with customization. Samsung, Huawei, and others do the same.

The result is that, while we may not see these exact CPU, GPU, and NPU chips showing up in 2021 flagship smartphones, the technology will begin to filter through regardless. Meanwhile Google has been rumored to be developing its own chips for the Pixel series and more, based on the same Cortex-A78 technology. Whether we’ll see that in 2021 in the Pixel 6 remains to be seen.