The City may be warbling about Apple acquisitions, but may be ARM too busy planning their mobile processor roadmap to care.  A leaked Samsung document acquired by EETimes has confirmed multiple generations of CPUs between now and 2013, including the single-core 1GHz S5PV210 “Taurus” Cortex-A8 tipped to hit mass production in Q3 2010, a 1GHz “Hercules” dual-core Cortex-A9 expected to arrive Q1 2012, and a 1.2GHz “Aquila” quad-core Cortex-A9 which should drop in 2012/2013.

As for Samsung’s part in all this, the company looks to be planning to use the ARM chipsets instead of Intel processors in their upcoming netbook ranges, together with A/V equipment and smartphones.  It’s unclear what GPU Samsung will be pairing the chips with, whether they’ll continue to use the PowerVR series as found in the iPhone 3GS, or switch to ARM’s Mali GPU. 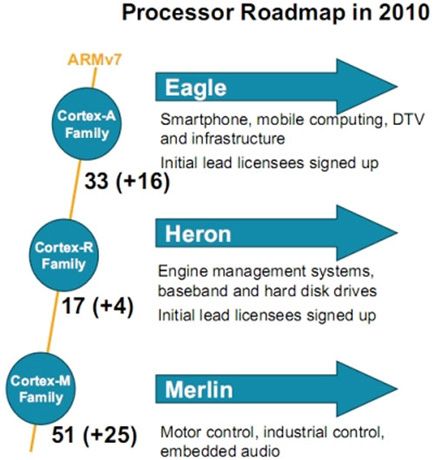