First up is the Cortex-A53 processor, which is “the most efficient ARM application processor ever.” Says the press release, the A53 can run a high-end smartphone using only a quarter of what is used by current offerings. The processor is optimized for throughput processing, and is only 25% the size of “mainstream superphone CPUs,” making it positively tiny. 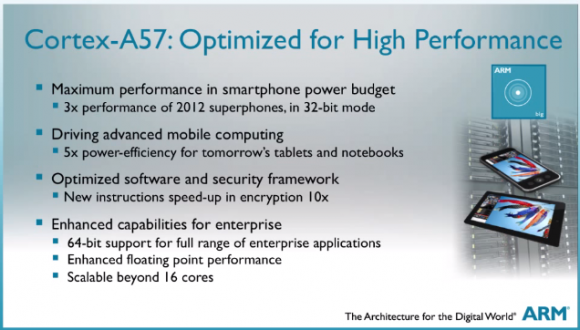 The Cortex-A57 processor is “optimized for high performance,” offering three times the performance of current offerings. This CPU is ARM’s most advanced and highest single-thread performance processor. According to the press release, the A57 offers “performance comparable to a legacy PC” whilst only sipping power, providing a combination of energy-efficiency and cost effectiveness to meet the needs of both consumer and enterprise users.

According to ARM, this series will provide the market with a means to push the base level of power for mobile devices upwards, with today’s high-end smartphones becoming tomorrow’s entry-level devices. Currently, we can expect to see the Cortex-A50 Series pop up in 2014. Check out the video above for more info.