Arctic explorers find message in a bottle left in 1959

Finding a message in a bottle in a remote part of the world is something that you might think would only happen in a work of fiction. However, that is exactly what has happened with a discovery made by researchers working on Ward Hunt Island in the Arctic. The island is off the northern cost of Canada’s most northerly Arctic island, Ellesmere.

The message was discovered in a bottle placed in a cairn of rocks built by human hands. The letter inside the bottle was written on a lined sheet of notebook paper and dated 1959. The message was left by a famous arctic explorer named Paul T. Walker. 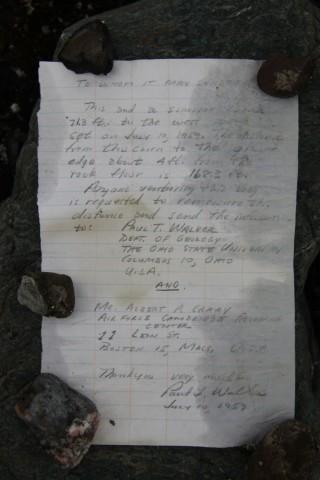 Walker was an American geologist who was working at the site in July of 1959. The note contained instructions for whoever found it to measure the distance between another rock Cairn and the glacier on the island. When Walker originally measured the distance, it was only 1.5 meters.

When the letter was discovered this summer and the distance re-measured, the rock cairn was 101.5 meters from the glacier. Sadly, Walker will never get the information. Only a month after he wrote that note he was flown out of the Arctic after having a seizure that left him paralyzed and died a few months later at the age of 25. The people that discovered the note put it back in the bottle and left their own note with it. Presumably, the new note asked for similar measurements, but the content is unknown.