Architects use 3D printing to create a beautiful concrete bridge

Researchers around the world use 3D printing to create a wide range of products. Typically we think of 3D printing being used for small plastic items, such as parts for cars and other small components for prototype devices. However, engineers are investigating and using 3D printing to build much larger structures in the construction industry.

Researchers from ETH Zürich recently worked with engineers from the Block Research Group and Zaha Hadid Architects, and other partners to create an interesting 3D printed concrete bridge in Venice. One of the more interesting aspects of the 3D printed concrete bridge is that it has no reinforcements inside. The team says millions of new buildings worldwide are constructed using reinforced concrete despite the fact that the construction generates large amounts of CO2 emissions.

The steel used for the reinforcement and the cement are known to be some of the largest CO2 polluters in the world. The 3D printing bridge project shows how to reduce CO2 emissions from cement and steel production in a real-world project. The project is a 12 by 16-meter arched footbridge placed in a Venice park that was constructed entirely without reinforcement.

The bridge is called Striatus and was created using an additive process featuring concrete blocks that form an arch-like a traditional masonry bridge. The compression-only structure allows forces to travel to the footings, which are tied together on the ground. Researchers note the dry-assembled construction is stable due to its geometry alone. 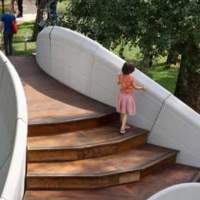 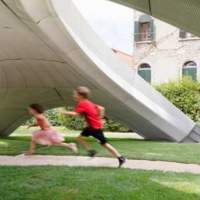 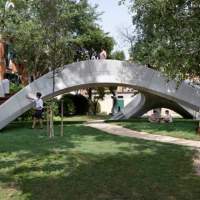 The 3D-printed concrete is a completely new type developed by the researchers with help from a company called Incremental3D. Rather than being applied horizontally as is traditional with concrete construction, the material was applied at specific angles, so it is orthogonal to the flow of compressive forces. That pattern keeps the printed layers in the blocks pressed together without needing reinforcement or post-tensioning. In addition, the structure doesn’t require mortar allowing the blocks to be dismantled so the bridge can be reassembled in a different location. If the bridge is no longer needed, the material can be separated and recycled.