Apple’s collaborations with Liquidmetal to date has only produced one (public) component, the iPhone SIM removal tool, but don’t assume the Cupertino’s investment in the injection molding IP will be limited to paperclip alternatives.  Cult of Mac has been talking to Drew Merkel, a $1m investor in Liquidmetal, about what the technology is capable of, and to be frank it sounds tailor made for the sort of hardware Apple has been putting out over the past couple of years.  According to Merkel, the custom Liquidmetal prototype “is the most advanced injection-molding machine ever made,” capable of casting complex, fingerprint resistant components in a single shot. 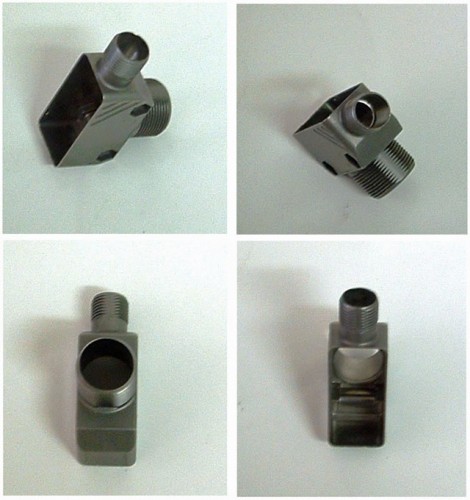 For instance, the aerospace part pictured above was produced in a one pass, rather than requiring several stages of milling, threading and deburring, saving time and money.  That adds up to “tremendous” cost savings, according to Merkel, together with inherent benefits of the Liquidmetal material itself: it’s scratch, corrosion and grease proof, is as strong as titanium but uses a third of the material, and by adding precious metals different aesthetic or functional (such as for antenna use) results can be achieved.

Right now, Liquidmetal has a single prototype CNC unit that’s located in a Korean factory and has a very low reject ratio, together with 24 more basic die-casting machines (used, among other things, to make the SIM ejection tool) that are “incredibly inefficient”.  The prototype, however, could feasibly produce something the size of four or five iPads, or a TV frame 1/8th of an inch in thickness – Apple HDTV anyone? – with no risk of bending or cracking, and no subsequent requirement for machining or polishing.

With just one prototype in operation, there’s no telling when we might see the first Apple-branded products made from Liquidmetal arrive on the market.  Still, the expectation is that the Cupertino company will likely invest in more machinery to expand commercial production.