Robert MacMillan, a reporter for Reuters, was one of the first share pictures as the demonstrations was going on. The incident is said to have lasted somewhere between 5 and 15 minutes, starting around 6:30 pm, with MacMillan adding that what he witnessed was a peaceful event, with no looting taking place and no arrests made. As for why Apple’s flagship retail store was chosen, one of the protestors said that the big building served as the perfect location to make a point. Another participant stated, “the CEO of Apple knows we shut his store down — that means capitalist America is going to take us seriously.” 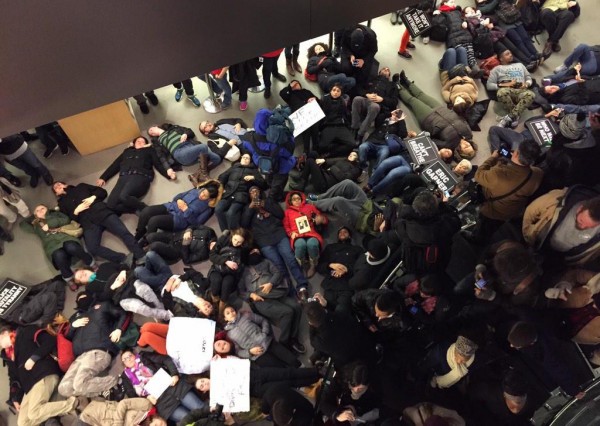 In the photos, Apple employees can be seen in red t-shirts, a part of the company’s ongoing promotion with the (RED) organization and its fight against AIDS. The store staff didn’t try to interfere with the protestors, or try to make them leave, but rather could be seen taking their own photos and observing the demonstration like other customers. Among those protesting, some could be seen holding signs that said Eric Garner’s name, as well as “I can’t breathe,” a reference to his last words, which were caught on video, made while in an officer’s fatal chokehold. 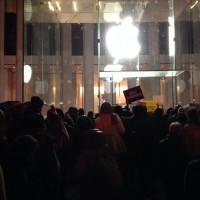 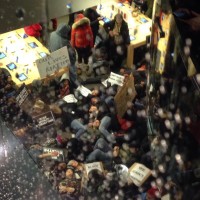 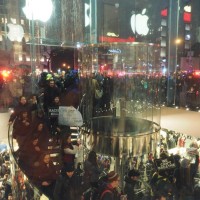 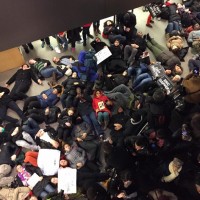 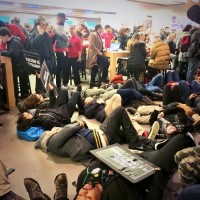 Garner’s death follows an alarming number of incidents in which white police officers have killed unarmed black men without consequences. Less than a week before, a grand jury similarly decided in Missouri that Ferguson police officer Darren Wilson would not stand trial for shooting unarmed 18 year old Michael Brown. Combined with the Garner decision, nonviolent protests have been taking place in a number of cities across the country for these two latest victims.