Apple watchOS 2 will have Activation Lock to deter theft

With Apple‘s mantra on privacy at WWDC, it’s a bit surprising that it managed to leave this relevant detail out of its on-stage spiel. Perhaps there wasn’t just enough time to cram all the juicy features coming in the next iteration of the Apple Watch platform, but a mere mention would have been enough for journalists to pick it up. That said, Apple did sneak it in the update web page for its Apple watchOS 2 preview, confirming once and for all that, yes, the Apple Watch will require your passcode to re-activate.

Apple has an new, ongoing crusade to protect its users’ privacy, primarily from criminals and sometimes from those who hunt criminals. Activation Lock, which was introduced back in iOS 7, was hailed to be a strong deterrent to the then rampant “Apple picking” iPhone theft by rendering a device practically useless with the right access code. This feature would later on be copied by rival platforms and other OEMs, making it somewhat of a staple in terms of a device’s security features.

So imagine the surprise, and maybe even incredulity, that the Apple Watch launched with this presumably basic feature. The smartwatch does have a passcode lock, but it is only triggered when trying to use the device after it detects that it has been removed from its owner’s wrist. It isn’t, however, required to actually reset the device and then activate it with another account, as shown in the video below. Good news for the user, the Apple Watch is wiped clean. Bad news, it remains stolen and can actually be resold.

On its watchOS 2 preview page, Apple lists “Activation Lock” as a new security feature. Like the smartphone version, it presumably keeps an Apple Watch locked down until the proper authorization has been given. It will presumably even prevent resetting the device in the first place. 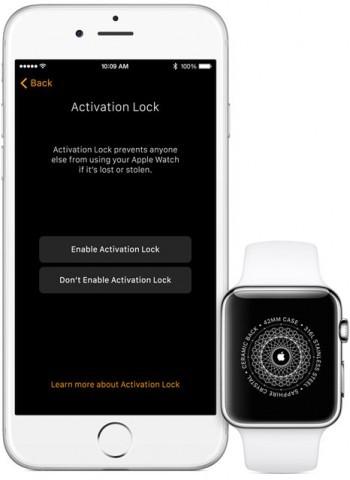 Admittedly, it’s not a critical new feature, unless you’re one who puts prime importance to security features such as this. It could definitely put users’ minds at ease, knowing they won’t be completely helpless in the face of an unfortunate incident. We patiently await when watchOS 2 rolls out later this year.