Excited for an Apple Watch? Already put in you pre-order or made an appointment? If you said yes to all of those, it might still be too early to start counting your smartwatch eggs. At least in some Apple online stores in Europe, the much awaited and talked about Apple wearable is marked with varying shipping dates, ranging from 4 to 6 weeks to May 5 to just May. No reason is being put out yet as to these rather wide, if not late, dates, but it could very well disappoint those that are eagerly waiting to get one on their wrists.

These dates have been spotted on German and UK online stores, with varying models bearing varying shipping schedules. At the earliest, buyers might receive theirs starting April 24, the official starting date of shipping. Some, might have to wait up to May 8. There are those that are vaguely marked as taking four to six weeks. And the rest are even more ominous as just being “MAY”. 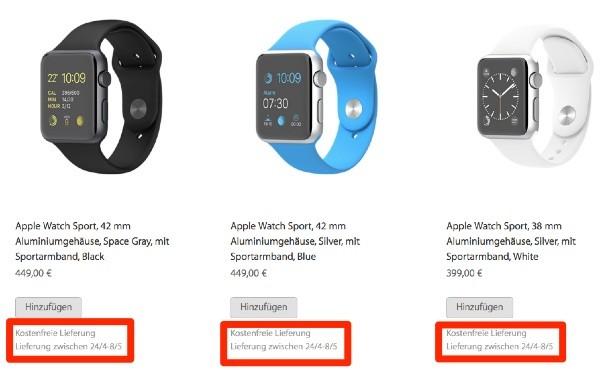 Imagine having to wait that long in line for an Apple device. Good thing that Apple isn’t entertaining walk-ins for the Apple Watch, unlike its iPhones. Or maybe, this is the reason why it won’t. Because it can’t. Some are speculating to limited supplies of the Apple watch as the culprit behind this month-long gap, which might not inspire confidence in the product. Perhaps Apple is still testing the waters as well, which could also communicate a lack of confidence in its own smartwatch.

Given Apple explicitly gave an April 24 date for the Apple Watch to hit stores, a late May schedule sounds rather disappointing, if not a bit shocking. We are unlikely to hear the real reason why, though delays aren’t exactly unheard of in this business.Will that be enough to douse cold water on would be Apple Watch buyers? Knowing the extremes some Apple fans will go through, we highly doubt it.