Given the increased attention to personal fitness and health in the past months since the pandemic hit last year, it’s really no surprise that smartwatch sales have considerably risen during that period. Given its focus on health and fitness as well as its track record in saving lives, it is also no surprise that the Apple Watch continues to lead that market all the way to the first quarter of 2021. It isn’t too late for Google’s Wear OS, however, and it might finally catch a break in the coming quarters, presuming its partnership with Samsung bears good fruit.

Compared to the same first quarter last year, the smartwatch market grew by 35% year on year. Counterpoint Research doesn’t point out the cause but it’s easy to see the trends given world events within those 12 months. People have become more conscious of their personal health and smartwatch that can detect irregular heart rhythms or arrhythmia and blood oxygen levels are particularly popular among consumers. 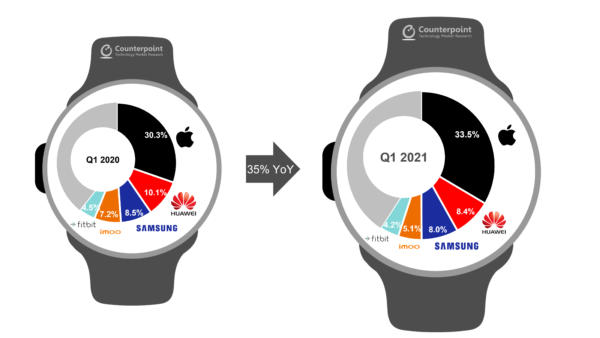 Counterpoint Research does focus on which brands and platforms are leading that market. Again, it’s no surprise to hear that the Apple Watch still leads the race, even increasing its share of the pie by 3%. While Samsung’s shipments did grow, it still ended up losing a portion of its overall market share. Huawei is still in second place above Samsung but its figures continue to decline as expected.

In terms of platforms, Wear OS barely has a presence but that could be changing soon. The market research firm points to the recent announcement of Wear OS integrating Samsung’s Tizen OS for smartwatches, suggesting that such a partnership could help increase both interest in and shipments of Wear OS smartwatches. Samsung can also benefit from this since its future Galaxy Watches will have access to more Android phones in the process. 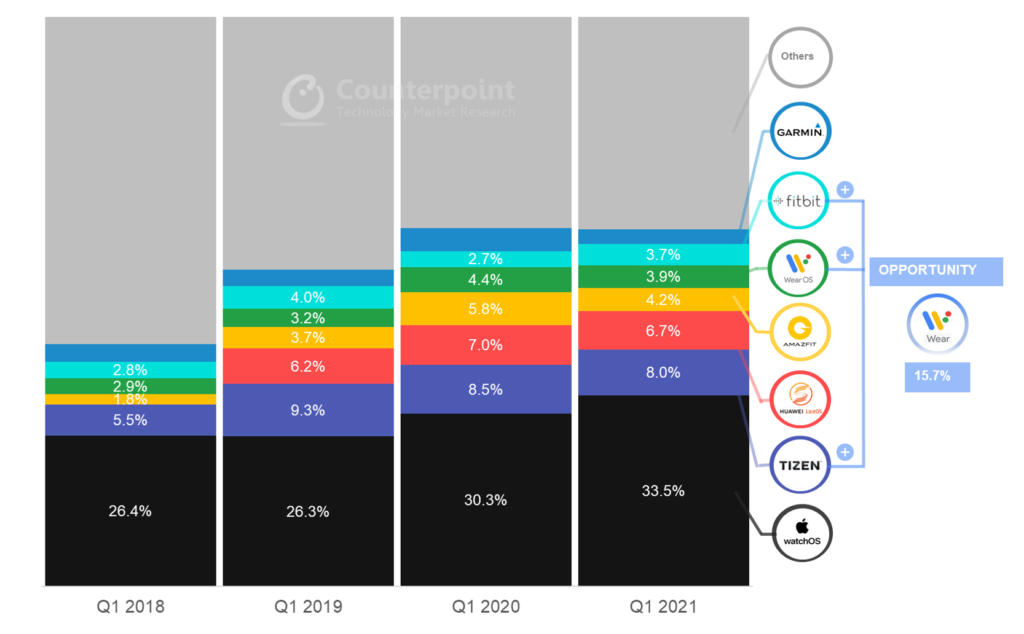 Google is definitely playing a lot of cards here, especially as it is still in the process of finally acquiring Fitbit. The latter, best known for its fitness trackers, also uses its own custom OS, even on some of its smartwatches. Whether those will eventually run Wear OS still isn’t certain but if they do, Google’s section of that chart could very well increase significantly.