It feels almost unbelievable that it has only been a month since Apple formally opened up its App Store for Apple TV developers. Especially when you consider that there are an estimated 2,624 apps that now grace that app marketplace for Apple’s TV set-top box. Even Eddy Cue confirms there is as much, without getting into exact numbers of course. And the insights that app metrics site appFigures share are quite interesting as the Apple TV seems to break every set expectation as far as app statistics go.

What do you think would be the most numerous type of app in the Apple TV App Store? You won’t be mistaken if you guessed “Games”, which is a perfect fit for something that displays stuff on the TV. Entertainment apps come second, also naturally, but is less than half of games. 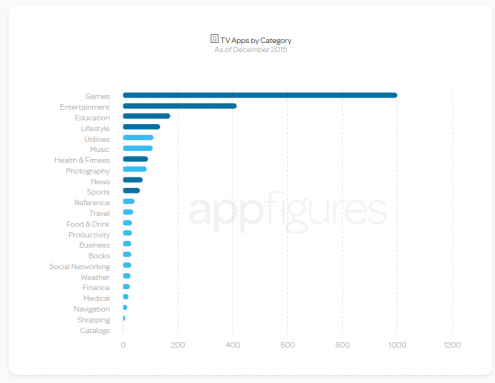 Despite that, however, games aren’t actually the most sought out apps on Apple TV. The stats are reversed when it comes to downloads, with Entertainment apps more than three times the number of games being downloaded. A mismatch in supply and demand if there ever was one. 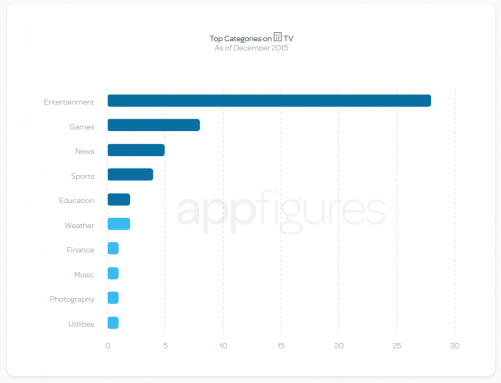 What is more surprising, however, was the matter of monetization, always a thorny issue as far as developers and the App Store are concerned. The lack of apps on the Apple TV platform presented a theoretical problem of monetization, at least based on the theory that paid apps would not have a large market during the Apple TV’s first month. But lo and behold, it made up 39 percent of more than 2,000 apps on the platform. Granted, those are mostly $2.99 apps, with a few daring $60.00 here and there. Still, an impressive number. 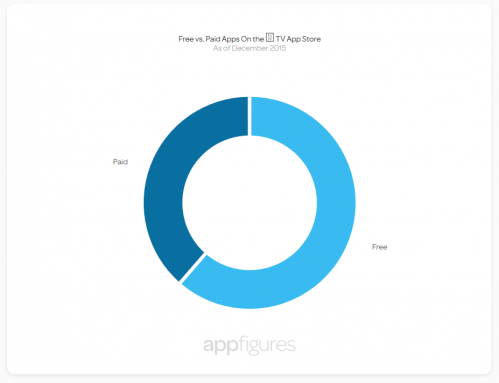 With the holiday season starting to warm up, appFigures expect so will the numbers. Shopping apps might become even more in demand this season, for one, and holiday discounts and sales might drive up paid apps higher as well.