Depending on your point of view (and probably your age bracket), Apple’s introduction of stickers and screen effects to iMessage is either a blessing or a curse. For those who dig stickers, there’s plenty of funny and creative third-party offerings on the App Store. One popular option — the most popular, in fact, sitting at the top of the paid iMessage apps list — is “Phoneys,” a sticker pack with blue text bubbles that are designed to replace a message sent from a friend. Apple, however, doesn’t find this funny, and is about to put a stop to it.

The way Phoneys’ stickers are used is actually quite clever. A user drags one up to the chat and places it over top a message they’ve received. Then to the other person it looks like what they originally typed has been magically replaced with different text. The stickers perfectly mimic the color, shape, size, and font of iMessage’s text bubbles, so they really do look like a seamless replacement of the message. 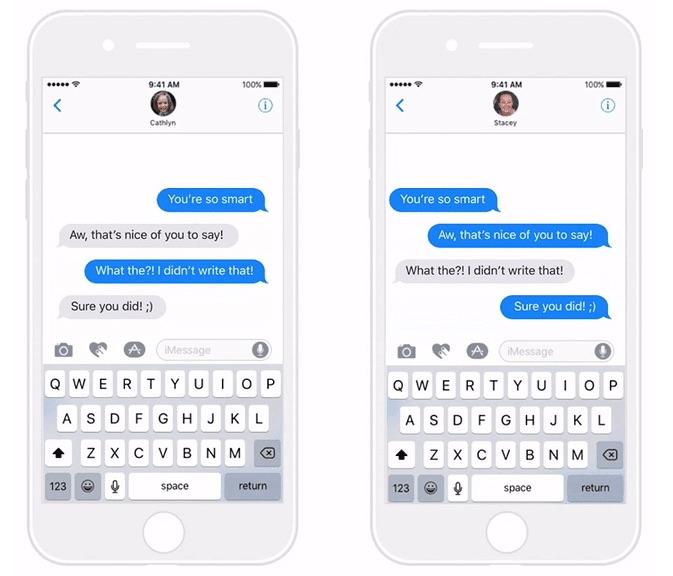 The sticker app is obviously intended to be used as a joke, but to keep things from getting out of hand the stickers are pre-set with dozens of phrases that are pretty much non-offensive and as family friendly as you can get. Examples include “You’re so smart,” “I have terrible taste in music,” “The sports team I pull for sucks,” and “My political views are totally wrong.”

So why is Apple unhappy? In a post on Medium, Phoneys developer Adam Howell writes that Apple reached out to him and said if the app isn’t significantly changed by the coming Thursday, it will be pulled from the store. The company seems to have a problem with how well the stickers copy the native UI, in addition to their existing stance against “prank” apps.

“Apple’s lawyers weren’t happy that Phoneys got through the review process. The stickers couldn’t be blue or green, they couldn’t use San Francisco as the typeface, and the app could no longer be marketed as a “prank” app, because Apple doesn’t approve prank apps (even though I myself had never used the word “prank” when marketing Phoneys, others did, and I certainly understood where he was coming from).”

To be honest, it’s kind of easy to understand why Apple wouldn’t be happy with Phoneys. The fact that they seamlessly mimic the UI means it could easily confuse users who aren’t that tech-savy, and even those who aren’t familiar with stickers in messaging apps. The sticker pack was only released earlier this week and has already shot to the top of paid apps chart, and Apple probably doesn’t want to send the message that this idea is ok and have another app pull off similar tricks.

In his post, Howell goes on to explain the changes Apple wants. The stickers can’t look anything like the iMessage text bubbles, and must be redesigned to more resemble comic book speech bubbles, which in turn defeats the purpose of the app.

The developer notes that he isn’t sure what he’ll do; if he leaves the app as it is, Apple will pull it next week, but those who’ve already bought it will be able to continue using it in the original manner. If he updates it, it will completely change the stickers for the existing users, not to mention ruin the app’s original concept, but he would at least be able to continue selling something that resembles its intent.

Either way, if you haven’t bought Phoneys yet, there’s at least a few days left for you to download it and have some fun with people in iMessage.