Apple and Samsung were the only profitable companies in the feature phone and smartphone space for the third quarter, according to a Canaccord Genuity report released this week. Apple took 56% of the mobile phone profits while Samsung took 53% (more on that peculiar sum of 109% after the jump.) The rest–Nokia, BlackBerry, Motorola, Sony Ericsson, LG and HTC all either broke even or lost money on their handset offerings.

The report confirms a steady upward profit duopoly for the two manufacturers. However, the referenced profit share percentages skew high because Chinese company data were not available for the report. Lenovo, ZTE, Huawei and Coolpad were not included in the data, for example.

It’s also important to note that the report focuses mainly on handsets, not tablets and other products. 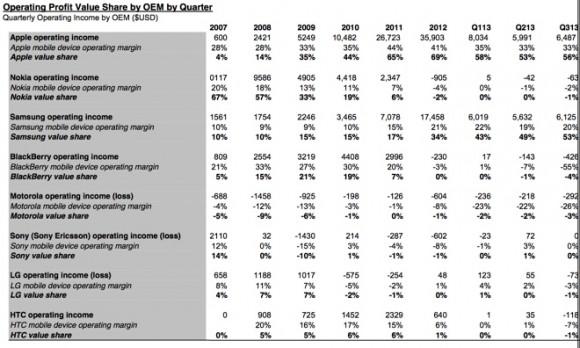 As far as that 109% figure goes, it only indicates that the other six companies referenced in the report lost money on their handset operations, indicating that Canaccord Genuity treated the profit share as a zero-sum game. Feel free to debate in the comments whether the total profit share for the industry can’t possibly exceed 100%. The germane point still stands: Apple and Samsung are the only companies that turned a profit in Q3.

Sony Ericsson broke even, according to the report. Nokia, LG and HTC each made up -1% of the profits. Motorola made up -3%, and chronic black sheep BlackBerry made up -4% of the profits. RIM just can’t get a break these days.

Apple’s 56% of the industry profits for handsets was up from 53% in the second quarter. Q4 findings are poised to continue its upward climb as the iPhone 5s and 5c figures keep on pouring in.